Wind power accounted for the biggest share of the more than 15 gigawatts of new generating capacity added in the first half of 2022.

According to its latest inventory of electric generators, 15 gigawatts (GW) of new utility-scale electric generating capacity came online in the United States during the first half of 2022, The U.S. Energy Information Administration (EIA) reports. The EIA compiles information on all U.S. utility-scale power plants currently operating, planning to come online, or retired (and includes all utility-scale plants that have retired since 2002).

With the electrification of transportation and home and industrial heating, the U.S. will need to increase its electrical generating capacity by 52% to 84% by 2050. Renewable resources, especially solar, may account for as much as 60% of that new capacity by 2050. 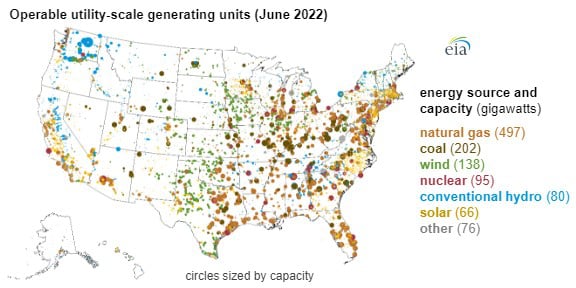 Where Is Utility-scale Electric Generating Capacity Coming From?

The EIA report indicates that wind power accounts for the largest share of new generation capacity with 34 percent of the 15.1 GW of online capacity. More than 40% of the added wind capacity is in Texas making up 2.2 GW of the 5.2 GW wind total.

Based on the most recently reported plans, the EIA says that developers could add another 29.4 GW of capacity in the second half of this year. Nearly half of that planned new capacity is from solar (13.6 GW), followed by wind (6.0 GW). 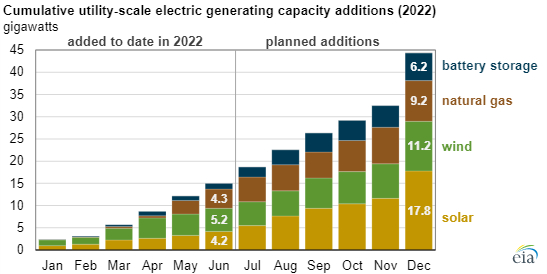 With renewables like wind and solar on the upswing, U.S. operators are planning to retire 15.1 GW of electric generating capacity from fossil fuel plants in the U.S. in 2022. Of that, more than half (8.8 GW) of the capacity has already been retired in the first half of the year. According to the EIA, coal-fired power plants will account for 76% of the retirements this year, followed by natural gas (12%) and nuclear (9%).