Wind was the U.S.’s second-largest electricity source on March 29, a first for renewable power generation. Is this a sign of a broader shift, or is it more of a blip?

According to new data from the U.S. Energy Information Administration (EIA), wind turbines generated more electricity than nuclear and coal plants on March 29, marking the first time wind has surpassed both for an entire day.

Wind electricity generation surpassed that of nuclear and coal on March 29. Image used courtesy of the EIA

A few notable caveats are underlying this data, the EIA stressed. Wind-powered electricity generation often peaks around this time of the year, coinciding with seasonal weather patterns and lower electricity demand in the spring and fall months. Also, the EIA’s monthly generation data shows that nuclear, natural gas and coal continue to outpace wind overall, and the EIA’s short-term energy forecast doesn’t expect wind to surpass coal or nuclear for any month through 2023.

Still, with wind turbines accounting for 9.2% of utility-scale electricity generation last year, the moment spells optimism for the sector amidst a recent slowdown.

Wind energy is already having a banner year in 2022, according to EIA’s monthly electric power charts. Net utility-scale wind generation grew 25.4% from January 2021 to January 2022, good for a total of about 379 gigawatt-hours (GWh) for the year—a decent chunk of the total for all renewables, 826 GWh.

Per data from S&P Global Market Intelligence, wind also led the metrics for U.S. generating capacity added last year, accounting for about 40.8% followed by solar at 35.6%, far ahead of the 18.8% contribution from natural gas-fired capacity.

But a separate S&P Global report tempered those gains, showing that the amount of wind capacity developers installed in 2021 actually decreased by 20% amid ongoing supply chain delays, logistics issues and international trade barriers.

Projections from the EIA echo that trend. Though the U.S. installed more wind capacity in 2020 than any other year, last month the agency reported that planned installations have dropped by nearly half in 2022 and 2023. Whereas 2020 saw 14.2 GW of added capacity alone, the EIA now predicts that developers will install just 14 GW combined in the next two years, numbers that pale in comparison to planned solar and battery storage additions.

Still, S&P data shows that this year’s wind project pipeline tops 20 GW, of which 34% is under construction and 8% is in the advanced development stage. 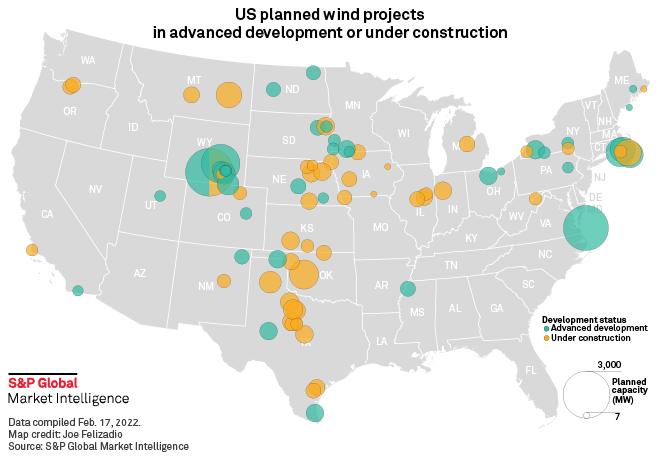 In 2021, wind farms accounted for 46% of utility-scale renewable power generation, followed by hydroelectric at 31% and solar a distant third at 14%. And while EIA predictions see solar generation surpassing that of wind by the early-2030s, the agency still projects that wind will account for 31% of all U.S. renewable electricity generation by 2050.

Wind will acount for 31% of total renewable generation by 2050, per EIA projections. Image used courtesy of the EIA

Tax incentives are a significant factor in spurring that development. According to the Department of Energy (DOE), the Renewable Electricity Production Tax Credit (PTC) allows owners and developers of wind facilities that broke ground between 2017 and 2021 to claim a federal income credit, generally less than 2 cents, for every kilowatt hour generated annually in the first ten years of operation. And the government’s Business Energy Investment Tax Credit (ITC) provides a one-time credit that’s valued based on the investment and is paid out when the equipment is placed into service.

But vulnerabilities remain. Per an exhaustive February review from the DOE, uncertainties in demand are expected to fuel the downward trend in installations in 2022 and 2023. Additional stressors include low labor costs from overseas competitors, strained logistics networks and infrastructure needs, necessary facility upgrades, shortages in rare earth magnets and commodity price risks, and workforce education and training gaps.