Welcome to the Resistor Guide!

The Resistor Guide will guide you in the world of resistors. This site is designed as an educational reference, serving as a reliable source for all information related to resistors. Several subjects will be covered including: 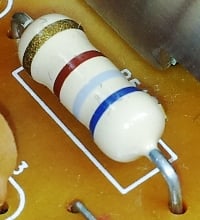 When you just start working with resistors you might wonder, what is a resistor? Or what exactly is the resistance of a resistor? Whenever you are working on circuits containing resistors, Ohm's law describes the fundamental behavior of resistors. Kirchhoff's laws can be used to analyse networks of resistors.

Resistors have several properties besides their rated resistance, such as their temperature coefficient, resistor noise and power rating. These resistor properties can be important to take into account depending on the application.

Resistors are used and manufactured by thousands of companies and people worldwide. Therefore several standards exist which help to harmonize resistors throughout the world.

Resistors are used in numerous applications, including virtually every circuit and electric device. When used, they are often connected in series or in parallel. A frequent application in hobby projects is to use a resistor with an LED to limit the current that will flow through the LED. A resistor can also be used to measure the current in a circuit; this is done using a shunt resistor.