The design of Wind Energy Conversion Systems (WECS) involves different kinds of generators, power electronics, and control techniques. This article will touch on each of those areas.

The increasing demand for electricity and the need to reduce environmental issues such as global warming have led to renewable energy sources being used for electricity generation in recent years. The design of Wind Energy Conversion Systems (WECS) involves different kinds of generators, power electronics, and control techniques [1].

The wind emulator's key objective is to replicate the turbine torque dynamic behavior in the generator shaft. Wind emulators serve as an excellent tool to validate new algorithms, verify the feasibility of research findings and also help educate people in the study of actual wind turbine behavior. Read on to learn more about the implementation, operation, and mathematical modeling of wind emulators.

Wind energy generation is becoming increasingly common mainly due to government incentives and technological advancements in this domain. The control algorithms for power electronic systems are becoming increasingly complicated due to ongoing research advances and the nature of the devices [2]. The validation of control algorithms is mainly accomplished using modeling and simulation before actual implementation on hardware. The analysis of the efficiency of a wind turbine based on simulation is critical in technological advancements and developments in wind generation.

It is crucial to have effective tools and resources to validate theoretical proposals, innovations and evaluate the effects on the overall system. One such tool that comprises both dedicated hardware and software which enables the emulation of an actual wind turbine on a reduced scale is a wind emulator. Wind emulators can be implemented using a DC motor that emulates the wind turbine characteristics and a permanent magnet AC motor that emulates a scaled-down version of a generator. The wind model can be utilized to generate turbine speed characteristics. The power flow to the DC and PMAC motors can be controlled using three-phase inverters along with a real-time controller, programmer, and data-logger [2].

The wind emulator utilizes a set of electrical machines, typically a motor and generator coupled by a shaft, driven by a power converter, and controlled in real-time by a computing environment to emulate the different characteristics of a wind turbine [3]. There are several approaches to design wind emulators that cater to a wide range of applications based on the desired requirements. DC motors are utilized in some cases due to easy implementation, but they demand higher maintenance. Induction motors are also employed in some cases as they are cost-effective and relatively smaller in size.

A wind turbine can be described using three mathematical models - aerodynamic, mechanical, and electrical models, as shown in Figure 1 [1]. The aerodynamic model helps in representing the energy conversion from a moving air mass at a certain speed which converts the rotational movement of the turbine into mechanical energy at the shaft of the generator. The mechanical model represents the speed and torque parameters of the shaft of the wind emulator system. The electrical model depicts the conversion of mechanical torque into electrical energy at the generator output. 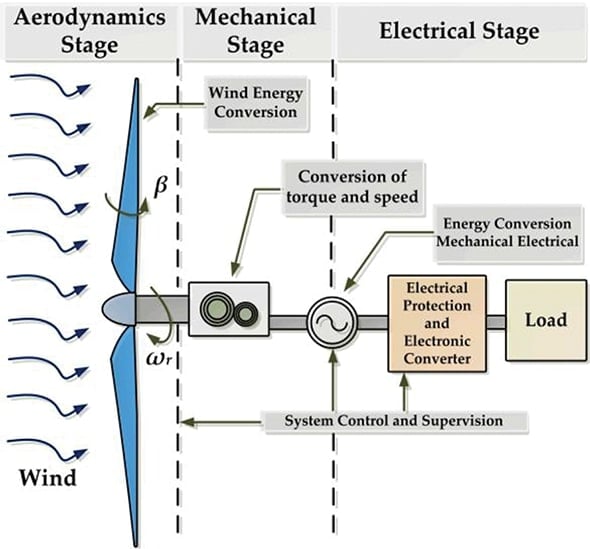 The wind turbine models are then used to simulate the behavior of a wind generation system. This intermediate stage helps to validate both the modeling and the designed hardware by comparing the results obtained. The dynamic behavior of the system can be captured using the wind velocity and pitch angle parameters, which form the input to the aerodynamic model. The power coefficient and turbine torque values can be computed using the above-listed user inputs along with the rotor speed value.

Further, rotor speed can be determined using turbine torque and generator torque values. Voltage, current, and other electrical parameters can be derived from the electrical model by applying load characteristics to the overall model. The system is capable of operating at variable speed without control for maximum power extraction, and this is achievable only at the nominal operating point. This is also governed by Betz law which indicates that the maximum power that can be extracted from wind is independent of the design of the wind turbine in open flow [4].