Determining Phase and Line Voltages and Currents in Wye-connected Generators

Determining Phase and Line Voltages and Currents in Wye-connected Generators

A generator that produces three separate sinewave output voltages with 120° phase differences is called a three-phase generator. The three generator coils may be connected in one of two possible configurations: Y-connection and Δ-connection. In this article, you’ll learn how to determine phase and line voltages and currents in wye-connected generators.

To complement?? this article, we provide you with the Delta-Wye Calculator.

The output voltage levels produced by a three-phase generator depend on the connection arrangement of the three individual generator loops (or coils). The two possible connection methods are wye (Y) and delta (Δ) because of circuit resemblances to those symbols.

Figure 1 represents a Y-connected three-phase generator, in which the coil terminals a, b, and c are connected to a single neutral terminal (N). There are four output terminals: A, B, C, and N.

Figure 1. For a Y-connected three-phase generator, the phase voltage and phase current are the output voltage and current from each coil. The line voltage is the voltage measured between any two output lines (conductors). The line current is the current flowing in a line. Image used courtesy of Amna Ahmad

All three coils in a three-phase generator are identical, producing the same level of rms output voltage. This is termed the phase voltage(Vp). Figure 1 shows EAa, EBb, and ECc, now identified as EAN, EBN, and ECN, respectively. All three are equal to Vp.

The phase current (Ip) is the current level supplied by each of the three generator coils. The directions of the phase currents (Ia, Ib, and Ic) shown in Figure 1 are those that occur when each coil has a positive output voltage. Thus, the phase current for coil Aa is shown flowing out of terminal A and into a.

Similarly, when the output of coil Bb is a positive quantity, terminal B is positive concerning b, and the internal current direction is from b to B. The voltage is identified as EBb or EBN in Figure 1. The voltage labeled ECc, or ECN, shows that terminal C is positive concerning c when coil Cc has a positive output. In a different subscript system, the order of the double subscripts indicates the current direction instead of the voltage polarity.

The conductors that connect a three-phase generator to a load are referred to as lines, and the current carried by each of these conductors is known as the line current(IL). Figure 1 shows that the phase and line currents in a Y-connected generator are the same quantities. 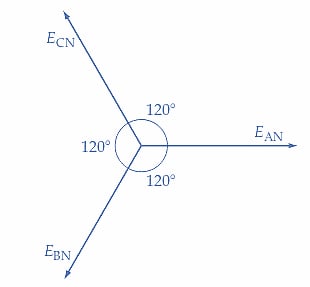 (a) Phasor diagram for voltages 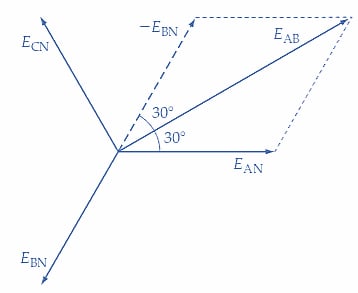 (b) Line voltage EAB is the phasor difference EAN - EBN 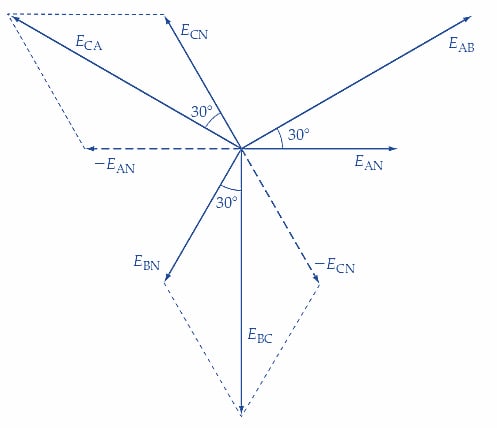 Figure 2. For a Y-connected three-phase generator, the line voltages are the phasor sums of pairs of phase voltages. This makes each line voltage equal to 3 (phase voltage). Image used courtesy of Amna Ahmad

which is the same as,

So, for a Y-connected generator,

Figure 2(b) also shows that line voltage EAB leads phase voltage EAN by 30°. Figure 2(c) shows the determination of EBC and ECA as the phasor differences EBN-ECN and ECN-EAN, respectively. Note that for line voltage EAB, the subscript indicates that the generator terminal A is positive with respect to terminal B when EAB is a positive quantity (see Figure 1).

Referring to Figure 3 (a), the voltages across the individual loads are obviously equal to the generator phase voltages. Therefore, Equation 1 can be rewritten as

Also, the individual load currents are clearly the same currents that flow in the lines. 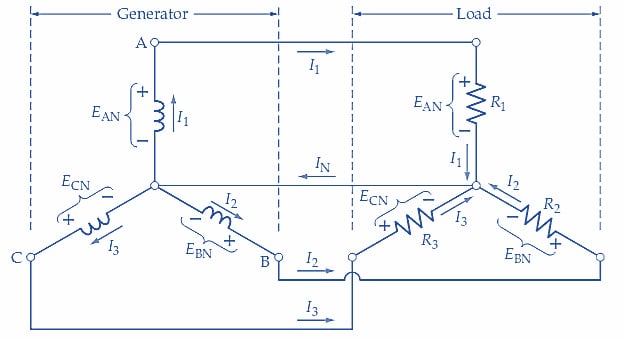 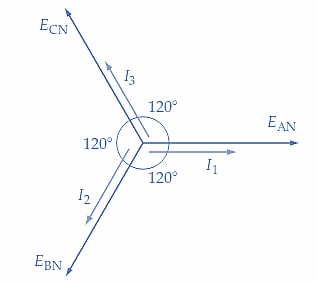 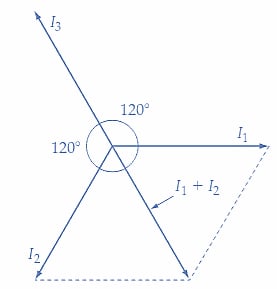 Figure 3. Circuit and phasor diagrams for a Y-connected three-phase four-wire generator with a Y-connected balanced load. In this case, the load voltages and currents are equal to the generator phase voltage and phase current. Images used courtesy of Amna Ahmad

(a) The line current

(b) The phasor diagram for the currents is drawn in Figure 3(b). Because the loads are resistive, each load current is in phase with the phase voltages. Figure 3(c) shows that the phasor sum of I1 and I2 equals -I3. So,