When one voltage cell's positive terminal is connected to another's negative, the combined output is the sum of the cell terminal voltages, and the cells are said to be in series.

If the cell EMFs are not all 1.5 V, the output voltage from the battery will still be the sum of the individual cell voltages.

Figure 1(b) shows the circuit diagram for the four cells in series. Alternative ways of graphically representing a battery of series-connected cells are shown in Figure 1(c), and the battery equivalent circuit is illustrated in Figure 1(d). The total internal resistance of the battery of series-connected cells is, of course, the sum of the internal resistances of the individual cells.

When an external load resistance (RL) is connected to a group of four series-connected cells, the output current is:

Note from the circuit that the output current flows through each individual cell. So, for example, if each cell can supply a maximum current of 1 A, the output current from the group of cells cannot exceed 1 A. The open-circuit output voltage, and the output current from the battery, can be calculated from Equations 1 and 3, respectively. The battery’s terminal voltage when supplying a load current is determined by Equation 1. Voltage cells that are not identical can be connected in series; however, the maximum current that the battery of cells can supply is limited to the maximum output of the lowest current cell.

Series-connected cells produce an output voltage equal to the sum of the individual cell voltages and supply a maximum current equal to the maximum that can be taken from the lowest current cell. 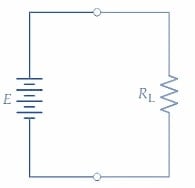 (a) Battery with an external load 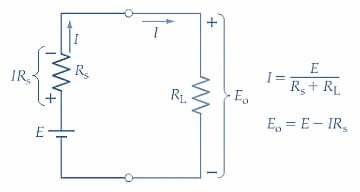 Figure 2. Circuit diagram and equivalent circuit of a battery of cells with an external load. The load current is IE/(Rs+RL), and the battery terminal voltage is Eo= E - (IRs). Images used courtesy of Amna Ahmad

Note that short-circuiting a battery or cell terminal should be avoided because it rapidly discharges the cells. Also, the large current that flows could permanently damage rechargeable cells.

The construction of a commonly-used 9 V battery is illustrated in Figure 3. Six 1.5 V zinc-carbon cells are used, each of which is approximately rectangular prism-shaped. The (negative terminal) bottom of each cell makes contact with the (positive terminal) top of the cell underneath. So the stacked cells are series-connected. The battery-positive terminal connects directly to the top of the uppermost cell, and a flat insulated conductor makes contact from the negative of the bottom cell to the battery-negative terminal. 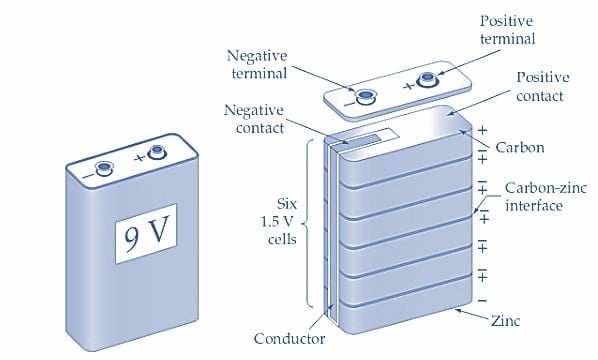 The series cells illustrated in Figure 4(a) each have their positive terminal connected to the adjacent cell's negative terminal. With this arrangement, they assist each other in producing a current flow. The connection method is termed series-aiding. When cells are series-connected to produce currents in opposite directions, as shown in Figure 4(b), the connection is called series-opposing. Series-opposing connections are normally avoided and usually occur only due to the error. The total output voltage is still the sum of the individual cell voltages, but the polarity of the voltages must be considered. As illustrated in Figure 4(c), when one of three 1.5 V cells is connected series-opposing, the resulting terminal voltage of the battery is: 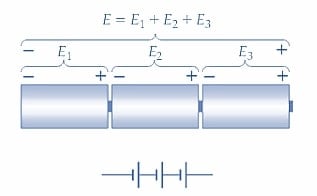 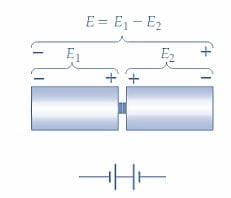 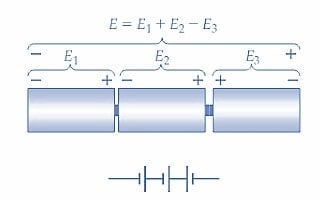 Figure 5(a) shows two series-connected 4.5 V batteries with their common terminal grounded, and the circuit diagram for the batteries is illustrated in Figure 5(b). Because the negative terminal of the battery B1 is grounded, its output voltage is E1=4.5 V, that is, positive with respect to ground. The positive terminal of B2 is grounded, so the output voltage of B2 is E2=-4.5 V, negative with respect to the ground. The combined output of the two batteries is usually designated ±4.5 V. Many electronic circuits use this plus/minus type of supply. 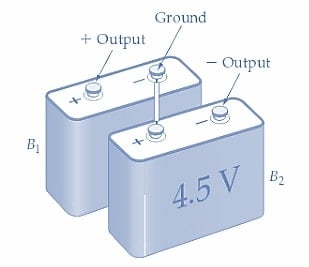 (a) Two batteries connected as a plus-minus supply 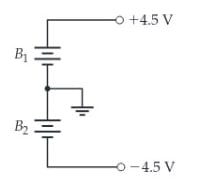 (b) Circuit of plus-minus supply

Figure 5. Two 4.5 V batteries may be connected in series with their common terminal grounded to provide a ±4.5 supply. Images used courtesy of Amna Ahmad

A simple voltage cell consists of two different metal plates immersed in a liquid electrolyte. Voltage cells can be operated in series, parallel, or series-parallel combinations. The voltage cell or battery’s performance can be defined in terms of the maximum voltage and current it can supply and its ampere-hour (A-h) rating.