In this article, learn how to compute the output current and equivalent resistance of voltage cells connected in parallel.

A cell is a unit that produces electricity at a fixed voltage and current level. The current produced by a battery is increased by connecting cells in parallel. When the positive terminal of one voltage cell is connected to the positive of another cell, and the two negative terminals are also connected together, the cells are said to be in parallel.

Consider two voltage cells connected in parallel, as illustrated in Figure 1(a). If each cell has a terminal voltage of exactly 1.5 V, the output voltage from the parallel combination is also 1.5 V.

But the output current Io is the sum of the individual currents from each cell. Therefore,

For the case of two identical 1.5 V cells in parallel supplying a load resistor of 5Ω (neglecting the internal resistances), 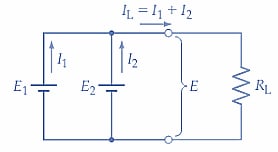 Figure 1. Parallel-connected cells give an output voltage equal to the terminal voltage of one cell and a maximum output current equal to the sum of the cell maximum current levels.  Image used courtesy of Amna Ahmad

A 0.2Ω resistance is to be supplied from a parallel-connected battery of 2 V cells. If each cell can supply a maximum current of 0.5 A, determine the number of cells that should be connected in parallel. Assume the cell internal resistances to be negligible. 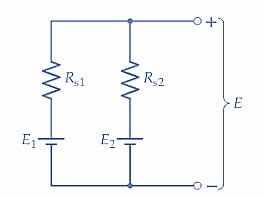 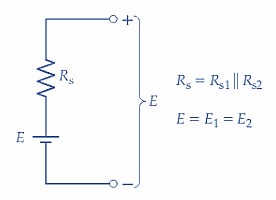 Figure 2. The equivalent circuit for two parallel-connected cells shows that the internal resistance of the battery is Rs=Rs1||Rs2.  Image used courtesy of Amna Ahmad

Taking the cell internal resistance into consideration, the output current from a group of parallel cells supplying a load resistance RL is

In some cases, cells connected in parallel may not have voltages that are exactly equal. For example, in the case of the two cells in Figure 1, E1 might be 1.54 V while E2 is 1.49 V. When this occurs, the cell with the largest terminal voltage will tend to discharge through the one with the smaller terminal voltage until both have equal voltages. If secondary (i.e., rechargeable) cells are used, one cell is charged from the other. Cells that do not have closely equal terminal voltages should not be connected in parallel.

Four cells connected in parallel each have a terminal voltage of E =2 V and internal resistances of Rs=0.1 Ω. Each cell can normally supply a maximum load current of 500 mA for 4 h. Determine the open-circuit output voltage of the parallel combination and the maximum load current that can be supplied. Also, calculate the Ah rating and the internal resistance for the battery of cells.

Parallel-connected (similar) cells produce an output voltage equal to the terminal voltage of one cell and can supply a maximum output current equal to the sum of the maximum currents from each cell.

Where positive and negative terminals are connected together, as in Figure 3(b), the cells short-circuit each other and discharge rapidly.

A simple voltage cell consists of two different metal plates immersed in a liquid electrolyte. Voltage cells can be operated in series, parallel, or series-parallel combinations. The voltage cell or battery’s performance can be defined in terms of the maximum voltage and current it can supply and its ampere-hour (A-h) rating.