Most people in the United States are accustomed to 120 V single-phase power. This article examines 480 V three-phase U.S. power, its advantages over other forms of power, and different wiring configurations.

Every electrical device has a specific phase, voltage, and frequency rating for its electrical input supply. For example, the power supply for domestic consumers in the U.S. has a single phase, 120 V, and 60 Hz rating. In contrast, U.S. industrial consumers have a three-phase supply at much larger voltages.

ANSI and IEEE specify the standard industrial level distribution voltage at 480 V and the point of use voltage at 460 V because the actual voltage received at the consumption site is lower due to transmission and distribution line voltage drops. This 460 V supply at the point of use is not referred to as the supply voltage, which is still 480 V, but rather the equipment rating voltage.

A standard three-phase power supply in the U.S. has a voltage rating of 480 V. This voltage drops to 460 V due to line losses before being supplied to connected three-phase electrical equipment. The power is provided through a wire connection between the source and the consumer site regardless of the supply voltage. Two wiring connections can supply three-phase power: the three-wire Delta connection and the four-wire Wye connection.

In the Delta connection, the generator windings are connected in series in the shape of a closed ring. In comparison, the Wye connection establishes a common point, known as the neutral point, by connecting one end of each phase winding in a star connection. Three wires/windings are used to supply the power in each connection, while a fourth wire, known as the neutral wire, is attached between the common points of the three-phase generator and load windings in the case of the Wye connection.

In contrast to a four-wire Wye connection, the three-wire Delta connection has limited applications. Its lack of a neutral wire means that it can be used for short-distance transmission systems and can only supply three-phase loads through the line-to-line voltage.

The Delta connection is shown in Figure 1. In this configuration, the system load receives a voltage and current of 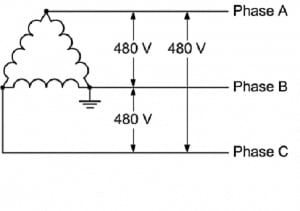 The Wye configuration, also known as the start configuration, consists of three hot wires and a neutral wire, as shown in Figure 2. In the United States, the line-to-line voltage (between any two phases) equals 480 V, and the voltage between a phase and the neutral wire equals 277 V.

The Wye connection is growing in popularity throughout the World due to the presence of the neutral wire, especially in the case of industrial supplies that need to power 460 V three-phase devices. It is more suitable for long-distance transmission than Delta wiring due to less current and, therefore, less insulation. Also, it can supply both single-phase loads through the line-to-neutral voltage and three-phase loads through the line-to-line voltage. In this configuration, the system load receives a voltage and current of 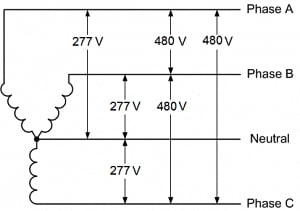 National Electrical Codes (NEC) are published by the National Fire Protection Association (NFPA) to cover the electrical wiring standards used in the USA and Canada, while the wiring standards and color-coding guidelines in Europe are covered by the International Electrotechnical Commission (IEC). The guidelines can vary based on the number of phases and the voltage rating of the wiring system. Table 1 shows the guidelines by NEC for the 240 V and 480 V three-phase wiring systems.

The three-phase systems in the U.S. are commonly referred to as 460 V and 480 V voltage systems, but they do not imply the same things. The differences between the two voltage levels in a three-phase system are highlighted below.

A 480 V supply could be used for single-phase or three-phase, depending on the connection (Delta or Wye). In contrast, the 460 V supply is only associated with three-phase equipment.

A 480 V three-phase power supply has several advantages over other supply forms. These advantages are highlighted below.

They provide more power than single-phase systems, as demonstrated in the equations below. The higher power can be used to supply larger industrial applications.

The reduced current to deliver the same power at higher voltages means smaller wiring can transmit the same amount of power.

They are more efficient than single-phase systems because less energy is lost due to line losses because of less current.

Three-phase power is more reliable than a single-phase system. This is because you can use three power phases rather than just one. If one phase fails, the other two can still supply power.

Industries in the U.S. rely on 480 V three-phase power for running their load. It is also used in Mexico, Canada, and South America.

The three-phase 480 V supply can be transmitted through a three-wire Delta connection or a four-wire Wye connection. There are line losses in the system, which makes it impossible to supply the generated 480 V to the load side. The nominal load voltage is, therefore, rated 460 V with a 20 V tolerance factor (± 10%), meaning the load side may receive and must be designed to tolerate a supply voltage between 440 V and 480 V.