This article highlights the importance of evaluating the fringing and thermal effects of multiple gaps in toroidal cores.

The efficiency of energy conversion and power density are the key criteria in the design of power converters. Packaging constraints, the demand for reduced size and the best performance frequently force power supply engineers to re-evaluate their approach to building magnetic components. Gapped ferrite toroids can find application in compact/low profile designs and potentially be a convenient solution compared with ferrite E-cores or toroidal powder cores.

Thermal management in power converters is a hot topic. Puns aside, with huge advances in the efficiency of power semiconductors, magnetic components are becoming a limiting factor for system efficiency. Simply, magnetic core construction and material technology haven’t changed much over the last decades so the cause of every loss mechanism is being ever closely examined.

One particularly insidious loss effect is from magnetic field looping outside of the intended circuit and coupling into adjacent conductors, either winding of the magnetic component itself or other metalwork. This coupling induces unwanted circulating ‘eddy’ currents, which lead to ohmic losses and increased AC resistance of windings. To reduce the effect, much effort is put into containing the magnetic field within magnetic cores.

A problem arises though when the design dictates that the core must have an air gap in the magnetic circuit. Now magnetic field lines have to cross the gap and inevitably some loop outside and intersect with windings. 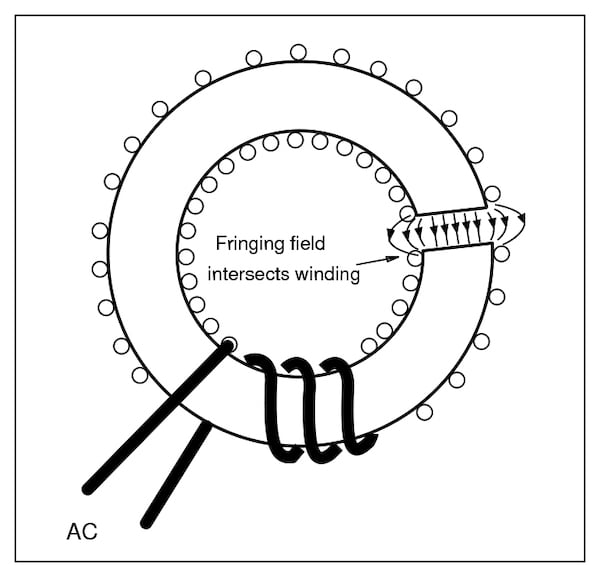 Figure 1. The fringing field around a toroid air gap.

If low loss ferrite material is used, it will have a relatively high inductance factor or AL value meaning high inductance for few turns. This combination often gives an impractically high value for B for any significant value of current i. A solution is to effectively lower the AL value with an air gap in the magnetic circuit. Now B is lower because L is lower. To get our desired inductance we have to increase N, increasing B again so are we back where we started? No, because L is proportional to N2 so we only have to increase N by a smaller multiple to get our desired L. The net effect of the gap is to achieve our headline specifications within the core saturation limits. The core size and associated Ae value is chosen to give a practical number of turns to fit with minimum ohmic losses at the operating current. A beneficial side effect is also that the new AL value is much more stable than before, defined mostly by the gap length.

Core geometry might depend on the application but usually comes down to ‘E’ shaped pairs or toroids in some format. Gaps in E cores are easy to achieve with a ground-back center limb or a spacer between the two halves, effectively providing two gaps in each magnetic circuit. Often toroids are preferred though because of their simplicity and bobbin-free construction. However, forming a gap now is not trivial. Iron powder cores with an organic filler forming a distributed gap are an option but tend to be lossy at high frequencies and relatively unstable. Ferrite toroids with a laser-cut air gap are now available and give high performance but the eddy current effects of the fringing field around the gap can be an issue. It’s also known that the effect of fringing fields is to reduce the effective gap length, increasing the expected inductance by a factor F, risking early saturation.  Larger gaps produce a disproportionally higher fringing field so a logical experiment is to see if multiple smaller gaps give significant benefits.

At Stadium Stontronics, a power converter switching at 63.4kHz was set up with an output inductor passing 4A, wound to give 100µH with a gap lg of 4mm. The theory says though that the inductance should be about 36µH given by:

Where µ0 is the permeability of free space. The discrepancy factor F, of 2.8, is evidence of the fringing field effectively reducing the gap length and for a single gap approximates to [2]:

Where G is the length of the inner diameter of the winding window. Using the data from the core chosen, (Ferroxcube 3C90 TX36/23/10), F calculates to 2.776, very close to the measured value. F is a multiplier for the effective flux density so you can see that this would be nearly three times higher than expected in this example.

To see the practical effect, the inductor was examined using thermal imaging, producing the image Figure 2 (left) showing a hot spot over the gap where the temperature is over 20⁰C higher than elsewhere on the inductor. 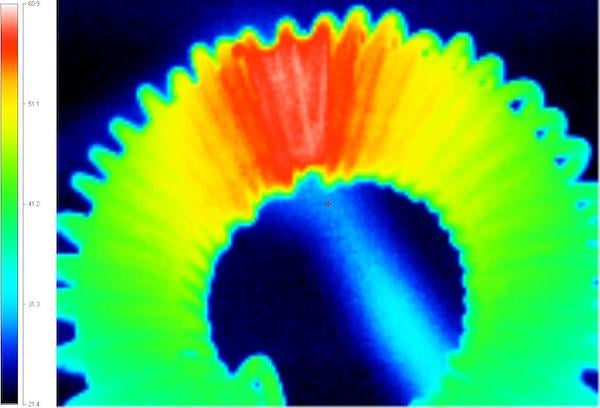 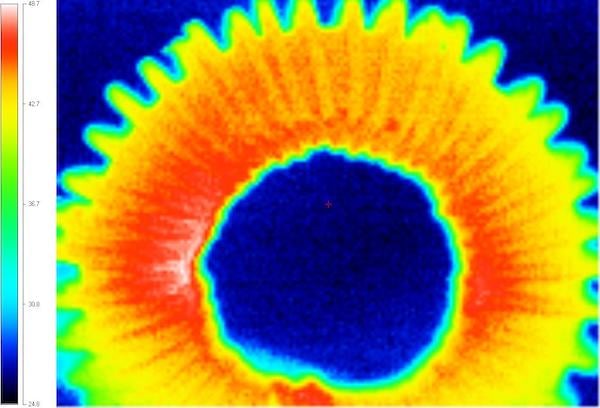 To evaluate the effect of a distributed gap, an inductor was assembled with two gaps on opposite sides, each 2mm to make 4mm total as before. With the same number of turns as before the measured inductance decreased to about 68.5µH, signaling that the fringing flux factor F is 68.5% of its value with one gap. To maintain electrical conditions, the gaps were decreased until the inductance was back to 100µH resulting in 1.1mm each side.

Another thermal image, Figure 2 (right), showed a dramatic difference: the temperature differential between the areas under the gaps and elsewhere was now only around 4⁰C. Measurements of the test converter showed an efficiency improvement of about 0.2% representing about 148mW saved. Though not evaluated, another benefit is expected to be a reduction in EMI from the fringing field.

The effects of a fringing field from a gapped toroid can be simulated with finite element analysis (FEA) software such as that from COMSOL. This was done using the Magnetic Field Interface in the AC/DC module of the program with material properties for the gapped core and winding specified (Figure 3). 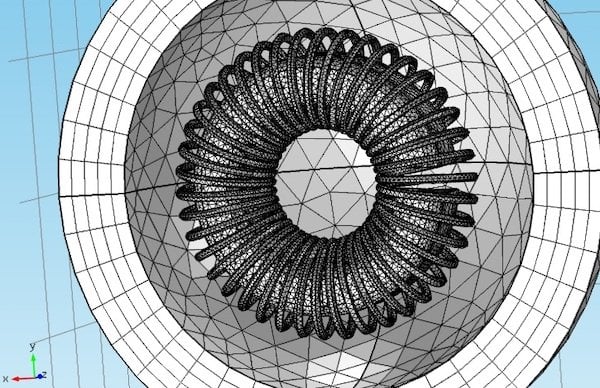 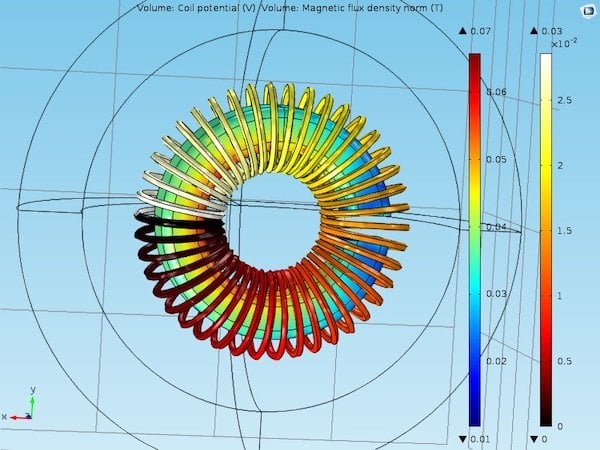 With a single 4mm gap, 42 winding turns and excitation current of 1A, the model predicted an inductance of 106.18µH and a resistance of 28.5 milliohms compared with the ‘real’ inductor measuring 100µH and 26.4 milliohms. This was considered creditably accurate. The single gap was then converted to two at 2mm each and the simulation run again giving a value of 67.16µH, very close to the real value observed of 68.5µH, validating the fringing factor equation nicely.

Now the beauty of simulation comes into play with the ability to generate any number of spaced gaps to see if the process can be extended. More gaps were simulated up to 16, always totaling 4mm and the results tabulated as shown in Figure 4. The ‘F’ factor can be seen to progressively fall toward unity while the inductance converges to the theoretical value of Equation 1. 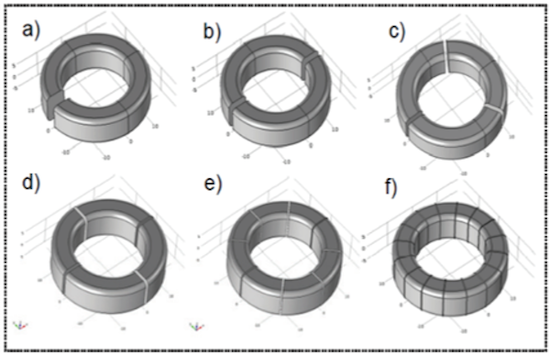 Figure 4. The fringing field simulation shows convergence to the ideal with more gaps.

While constructing a toroid with 16 air gaps may not be a practical proposition, it is shown that just two instead of one gives a significant decrease in the overall fringing field with a consequent reduction in hot spot temperatures and potential EMI. Practical tests and simulation agree well. While exotic distributed gap toroids may be equivalent, the technique described allows the use of relatively standard ferrite material saving costs while achieving the same efficiency benefits.

Rafal Kasikowski is the Design Engineer of Stadium Stontronics, a company offering solutions as well as customized design, engineering, PCB assembly, and box build services to customers. He earned his master's degree at the University of East Anglia.