This article discusses the importance of thermal management and simulation in power electronics systems that demands very high power loads.

While designers have always strived for efficiency within the field of power electronics, over the last five years, a combination of budgetary pressures, changing device lifecycles and corporate social responsibilities (CSR) concerns have helped drive demand for increasingly low-cost, lightweight and energy-efficient components and end devices.

However, this poses a significant problem for device designers and electronics engineers. Despite these rising demands, there is no avoiding the fact that power electronics are designed for extremely high power loads; power which, in turn, generates a lot of heat. The thermal design of the power electronics device and systems must be considered from the outset.

Power electronics systems put some uniquely demanding strains on semiconductors devices. Although we have seen significant improvements in the efficiency levels of power electronics devices, with some conversion and switching products reaching efficiency levels of 98%, the fact is that the very high power loads involved still generate significant amounts of heat loss. Even when a 98% efficiency is achieved, the remaining 2% of wasted energy -represents a significant amount of heat, often hundreds of watts, which has to go somewhere. As such, managing the heat dissipation from components and from the wider system is absolutely critical to the design of power electronics. 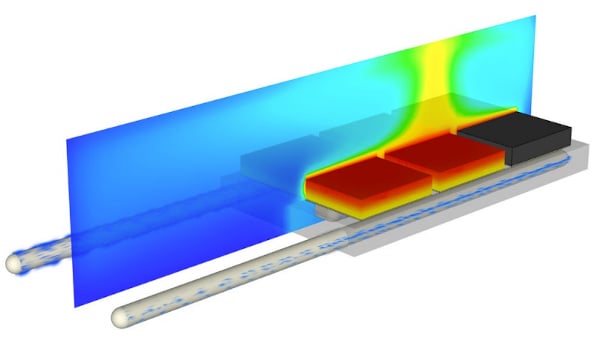 End users typically demand very high reliability and longevity, which is essential in a wide range of industries, from renewable energy and electric vehicles right through to the rail industry. High temperatures can reduce the reliability of components. To take the example of aluminium electrolytic capacitors - used for energy storage and filtering – these electrochemical devices are often the life-limiting components within power systems. According to some estimates, the average aluminium electrolytic capacitor will have its operating lifespan halved with every 10°C rise in temperature.

The load on power electronics devices will typically be transient in nature. The variation over time has an impact on both the immediate performance of a semiconductor, and on its lifespan. Power cycling – where a device rapidly switches between high and low power loads causing large swings in temperature – can stress the solder and bonding of semiconductor devices, resulting in device failure.

If the operating temperature of a device is not managed the operating conditions of the power electronics device might change leading to a further temperature rise, a phenomenon known as thermal runaway. As the junction temperature of a power transistor increases, the on-resistance of transistors increases, which in turn creates more heating of the junction, in a positive feedback loop. Ultimately this can cause the electronic devices to effectively burn themselves out.

The nature of these thermal behaviours means that designers are faced with a number of vital decisions in the design process in order to optimise heat transfer away from critical semiconductors and other components.

At the chip level, appropriate materials for substrates, bonding, die attaches and interface materials need to be selected. At the system level, there are equally important decisions to be made regarding PCB materials, heat sinks and whether to incorporate liquid cooling or thermoelectric coolers.

The more robust materials used in power electronics also brings their own challenges. Compared to typical FR4 PCBs, materials like ceramic or copper have high thermal conductivity, which can be advantageous in thermal management, but at the same time, these materials can also add significant cost and weight to a design if not used optimally.

Design engineers must also be careful to consider the real-world environments in which their devices are likely to operate. In a controlled setting, engineers may be confident in their product’s ability to dissipate the heat generated. However, those capabilities may not translate to the real-world environment in which it will ultimately be deployed.

To deliver a fully optimised product these decisions need to be tackled as early as possible in the design process. Unfortunately, it is still the case that many designers rely on ‘rules of thumb’ to deal with thermal complications, which leads to ‘over-engineering’ products or trying to ‘manage out’ thermal complications at the back end of their projects. Indeed, according to research from 6SigmaET, only 25% of design engineers test any thermal operation early on in their designs, while 27% wait until after a design is complete.

By not dealing with thermal considerations early in the design process, engineers are fundamentally compromising their designs – either by adding unnecessary cost, compromising ultimate efficiency and performance, or by failing to hit other important requirements such as weight.

There is no one-size-fits-all material that engineers should use for their designs. However, by simply altering one of their materials design engineers can make efficiency savings or thermal performance gains. So what’s the key to making the right design decisions at both the chip level and the system level? Thermal simulation.

Using simulation to solve at all levels

Through the use of thermal simulation, engineers can test the thermal performance of semiconductors – both the precise detail of heat sources in an IC at the micron scale, and also in terms of how they interact as part of an overall system.

By creating a thermal simulation model in advance, engineers can test their designs using a wide variety of different materials – for example, switching from copper to aluminium at the click of a button. Simulation also enables designs to be tested in a massive array of different environments, temperatures and use states. This will not only help to identify potential inefficiencies, but also reduces the need for multiple real-world prototypes (further helping to reduce overall costs).

As thermal simulation packages start to bundle pre-designed component types, templates and materials as standard, this process is becoming easier than ever before. As one example, 6SigmaET now includes an in-built “Package Builder”. This allows users to automatically generate individual IC component models at the system level simply by defining a list of parameters. Through this interface, users can create detailed integrated circuits and thermal models for inclusion within their product designs – allowing them to factor in internal temperatures of complex ICs. 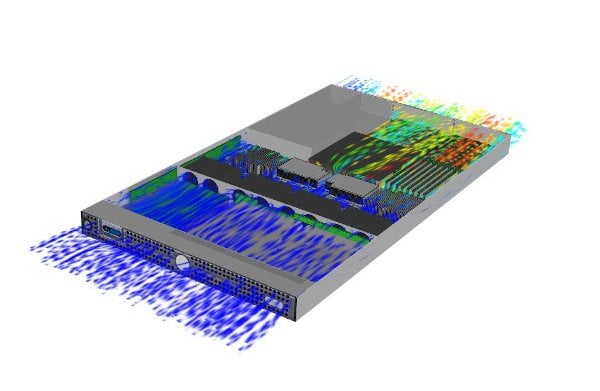 Tools like this are making it increasingly easy for engineers to precisely understand the thermal challenges of their designs. In turn, this means that thermal considerations can be dealt with far earlier in the design process, enabling the thermal performance of power electronics semiconductors and systems to be fully optimised, reducing reliance on expensive late-stage ‘fixes’, and avoiding unnecessary over-engineering.

Put simply, the ease of use and capabilities of today’s thermal simulation tools means there is no longer any excuse to rely on ‘rules of thumb’ when it comes to the thermal performance of semiconductors in power electronics products.

Tom Gregory is a Product Manager at Future Facilities Ltd. He has been working at the company for five years, and is responsible for marketing and supporting customers on the 6SigmaET side of the business. He earned his Higher National Certificate in Electrical and Electronics Engineering at Abingdon & Witney College, Abingdon, UK. He then earned his Master's Degree in Electronics and Computer Engineering at the University of York, City of York, UK.