There is no doubt that power electronics plays a critical role in the evolution of the overall infrastructure of energy supply, from motion control and

There is no doubt that power electronics plays a critical role in the evolution of the overall infrastructure of energy supply, from motion control and drives to industrial automation and traction techniques. However, unlike decades of impressive developments in semiconductor technology, the developments in the passive components arena, especially magnetic components, has been rather slow and seen as power system bottleneck in terms of efficiency and miniaturization.

It should be noted that the Bs is measured according to IEC standard for polycrystalline ferrite under room temperature, at a field strength of 1194 A/m and 10 kHz, which is far beyond the application range. The applicable field strength varies between 100 and 200 A/m, depending on the industry ( such as aerospace, industrial, and consumer electronics). Accordingly, the power losses of these materials at 1MHz and 50 mT vary from around 350 mW/cc at room temperature to approximately 1W/cc at 100°C. The measuring condition is still under sinusoidal mode.

The ferrite material given by high resistivity is limited by the saturation flux density due to its polycrystalline nature compared to their counterpart metal alloyed material [Figure 1]. Since magnetic parameters are highly nonlinear, a direct comparison is often misleading. Consequently, the decisive parameter – to express the softness of materials – is definitely the coercivity under the same temperature, field strength, and frequency. 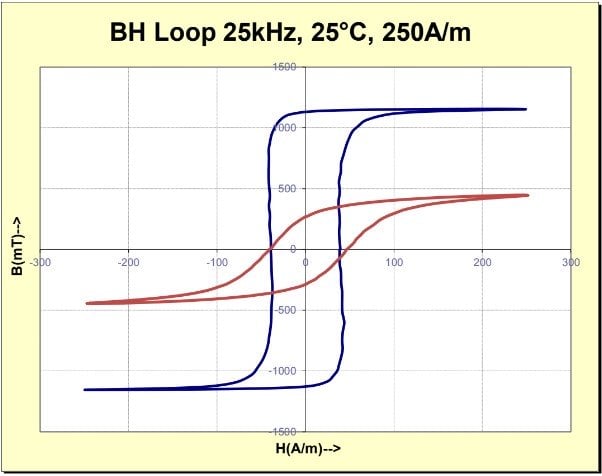 A very recent development is of a polycrystalline MnZn-ferrite material with saturation induction can be stated at least 600 mT at room temperature and at least 500 mT at 100°C. These are almost 20% higher than reference power ferrite material for 120 kHz application.

The saturation induction (Bs) of a polycrystalline MnZn-ferrite component is proportional to the magnetization per unit volume and, as such, it depends on the chemical composition of the crystalline unit cell and on the density of the material. It is, therefore, less dependent on the morphological characteristics of the microstructure, such as grain and pore size, or the chemical nature of the grain boundaries. Since MnZn-ferrites are crystalline materials of the cubic (only partially inverse) spinel structure with ferrimagnetic behavior, the saturation induction maximization will most probably proceed according to the rules of the maximization of the magnetization difference between the B (octahedral) and A (tetrahedral) sublattice.

Presumably, the iron content of the composition should be maximized under the conditions that the spinel phase is retained and no secondary phases are formed (i.e. hematite-Fe2O3 or wustite-FeO). Thus, materials with the highest possible iron concentration will be synthesized, the conditions for doing that will be specified and the magnetic properties will be measured with a focus on saturation induction as a function of temperature.

The synthesis process is mostly applying so-called mixed-oxide method, according to a powder mixture of the raw materials (Fe2O3, Mn3O4, ZnO) at the appropriate proportions preferred. It is shaped by uniaxial pressing and sintered at elevated temperatures, which is finally supposed to produce the new material grade in large scale. On the other hand, the power losses of components made of MnZn-ferrite materials depend strongly on the morphological properties of the microstructure.

The fraction of the losses depending on the crystal is termed “hysteresis losses,” while the fraction that depends on the morphology is termed “eddy current” losses. There is also a third fraction, termed “resonance losses,” that is related to the ferromagnetic resonance of the material and is both crystalline and random microstructure dependent. At high application frequencies (~1MHz), such as those targeted in this proposal, the “eddy currents” dominate and constitute more than 50% of the total power losses. The very first strategic step in the methodology would be the reduction of the main power loss source. Subsequently, attempts to reduce the other source losses will be included.

It is well known within ceramic powder technology that the achievement of fine-grained microstructures requires active powders with small particles and relatively low temperatures. This way, grain growth will not take place during sintering. These low temperatures do not favor densification. Moreover, the presence of excess iron in the composition (as required for the achievement of high saturation induction) is another factor that delays densification. This happens because excess Fe3+ ions on divalent iron positions create positively charged defects, which are compensated by negatively charged cation vacancies. This, in turn, through the Schottky equilibrium, decreases the concentration of positively charged oxygen vacancies. In ionic solids, the diffusion of the relatively large oxygen ions through oxygen vacancies is the rate controlling step. The existence of oxygen vacancies is essential for mass transfer and densification. Conclusively, there is an inherent interaction between crystal composition and processing towards the development of the appropriate polycrystalline material.

The main challenge is that the process parameter that favors high saturation induction (i.e. iron oxide content) also retards sintering and densification desirable for high-saturation induction and high-frequency performance. This is exactly the region where innovation will be achieved, bringing a breakthrough in MnZn-ferrite materials and significantly extending the frequency application region of MnZn-ferrites.

Those previously mentioned obstacles are also the reason that all currently existing high-frequency materials have low saturation inductions. The proposed concept is to study the densification of MnZn-ferrites and identify the process parameters that affect the two individual, but simultaneously occurring, processes: densification and grain growth. The results will be used to design firing schedules, allowing densification and grain growth at the most possible separated and consecutive temperature regions, rather than in overlapping regions.

This gives more freedom to the materials engineer to design compositions and microstructures towards the desired magnetic performance. In a later stage, material optimization will occur due to fine-tuning. This may include slight composition adjustment to locate the Curie point at the appropriate temperature and mediate the saturation induction decrease with temperature. Likewise, the addition of certain selected dopants can increase the resonance frequency and therefore reduce the resonance fraction of the losses. Similarly, the addition of dopants with high resistivity (eutectic) phases the grain boundaries and increases the specific resistivity of the material, decreasing even further the eddy current fraction of the losses. 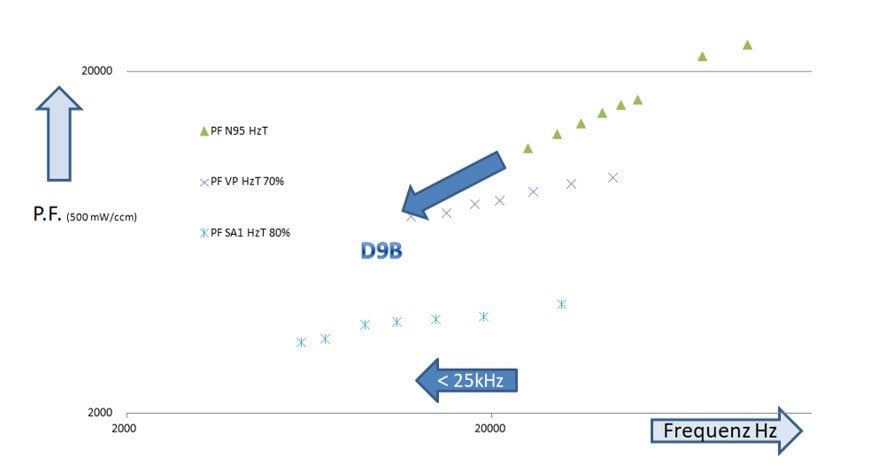 Given the importance of loss, otherwise a recognizable inefficiency, the loss mechanism is still not fully understood. Consequently, it deserves a separate phrase to describe loss more clearly. The only physical origin is damping of the domain wall by induced eddy current and relaxation process. Therefore, the investigation of excitation mode becomes increasingly important to quantify the loss under desired conditions. This enables more insight into loss mechanism for material scientists, as well as for inductive component designers.

For real application, the magnetic flux is important. The theoretical comparison of flux density is not necessarily helpful for particular application design. In the case of thin tape wound core, the whole dimension of large-sized alloyed tape wound cores is suffering from the packing factors (~ 20% for a thinner tape like 23 μm). With increasingly thinner tape (to lower eddy current loss) the polycrystalline ferrite-shaped core has a measurable porosity.

It is clearly illustrated in Figure 2 that for mid-frequency application, like traction, wireless charging and solid state transformer for DC grids and large-sized shaped ferrite cores with high Bs characteristics are intriguing alternatives for a wide range of mass application.

Compared to alloyed tape wound material, the size of ferrite core shape is limited by powder metallurgical process. Nowadays the majority of MnZn-ferrite cores have small dimensions, not far away from the dimensions of the laboratory samples. The emerging market is driven by SiC for photovoltaics, electrification for automotive and installations like wireless charging infrastructure require large-sized MnZn-ferrite cores in order to serve the market needs. Because of high power demands, these cores must have meaningful dimensions, which on average are more than 10 cm. This is associated with certain technical problems that need to be addressed in the development phase before the transfer of the technology to production.

In every solid component made by compaction and sintering of a particulate powder, numerous gradients may arise. Powder flowability and compaction technology may not be ideal, often because they can generate local density gradients in the compacted specimen. During heating and cooling, temperature gradients may develop between the surface and the center of the specimen. Intermediate phases may form or oxidations and reductions may occur with influence on the unit cell sizes. These phenomena may result in stress generations within the polycrystalline body of the product. In laboratory samples or in small size products, the stresses generated by these gradients usually do not exceed the fracture strength of the material and are not noticeable. However in large size products, like those intended to be produced within this project, the fracture strength can be easily exceeded and internal cracks will appear.

The magnetic performance is extremely sensitive in the presence of microcracks. It is therefore proposed to investigate the mechanism of raw materials reaction during the preferred step and the influence of process parameters (such as atmosphere, the particle size of raw materials etc.) on the phase composition of the final powder. Subsequently, the various weight, expansion shrinkage, and phase changes during sintering will be monitored as a function of the phase composition of the powder and of the partial pressure of oxygen in the sintering atmosphere. The most recent development is that the smoothest firing schedule. Therefore, the eventual temperature gradients will not give rise to gradual oxidations/reductions or other chemical reactions and stress generation.

Integrating Ferrite Over the Past Century

The most recent ferrite development is illustrated in material and core shape. The focus is on the highest Bs material for high power, i.e. SiC driven application in high power for motion, automotive and traction applications associated with mid voltage dc grid propagation, and high power density. The high Bs is desired according to Snoek law. While Bs is predominately influenced by chemistry, the loss mechanism is crystallized with the investigation of morphological nature, its processing parameter or densification process. Another trend in large-sized core shape (about 8-inch in height and 4-inch in width) overcomes challenges to deliver perfect artificial ferrite ceramic to fulfill the needs of the newest developments in power electronics.

Today ferrite, after nearly 100 years of development, is manufactured with a capacity of about 500,000 metric tons per year for diverse industries. This recent innovation is rooted in Snoek formulation. Both high power density and high power application require high Bs characteristics. To understand the magnificence of artificial ceramics, it is not only the chemical composition, but the understanding of morphology process engineering, that is essential.