If you look into the low power range of DC/DC converter modules that which provide galvanic input to output isolation, several questions come to mind. Here are the four most common questions:

Why do you even need an isolated power module?

The following schematic (Figure 1) shows a typical application for an isolated power module. It shows the set-up for isolated RS485 communication with the essential functional units. 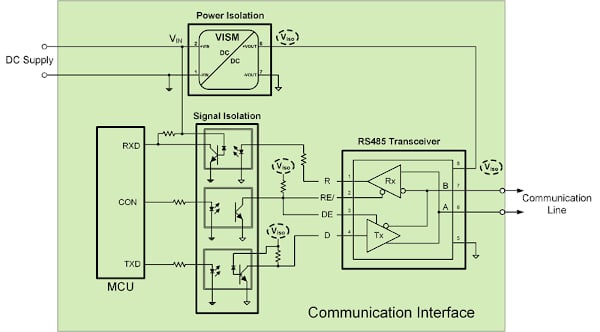 The following functional units are necessary to set up isolated communication:

But why should you galvanically isolate a supply from a bus? Galvanic isolation prevents faults that can propagate from the supply voltage onto the bus and disturb it. We pursue this question in more detail in the following subsection.

Ground loops and how to eliminate them:

A ground connection principally fulfills two tasks. On one hand, it serves as a reference for all parts of a circuit and for ground level equalization and hence as a return conductor for currents, on the other. If a voltage in a circuit is referenced to ground, i.e. an asymmetrical circuit structure, ground loops can take place. They always arise if two ground points of a spatially separated circuit are electrically connected at several points.

The illustration shows a simplified schematic consisting of two functional units (block 1 - source, block 2 - sink). As a result of the spatial separation of the grounds between block 1 and block 2, a non-negligible line impedance Z-source arises. When the current flows in the “return line from block 2 to block 1”, i.e. on the ground line, a voltage drop UM1/M2 across the line impedance Zsource is generated. This results in a shift of the respective ground levels M1 and M2. 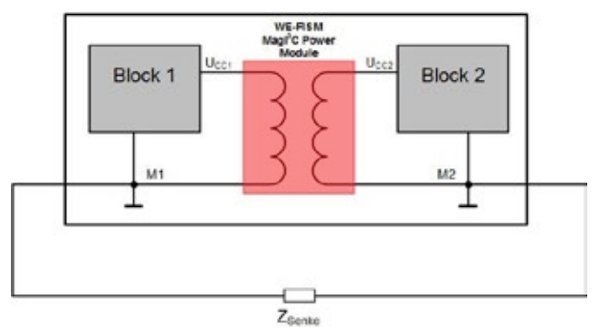 Figure 3: Galvanic isolation of the ground

Only when the two ground nodes M1 and M2 are connected together via an additional line an interference current can flow. This, in turn, generates a voltage drop across the line impedance Zsink – which consequently leads to DC interference. An additional connection arises, e.g. through inserting another part of the circuit with its ground structure into the existing ground structure, as depicted in Figure 2.

The attenuation of the interference described can be attained by selecting suitable decoupling methods. In principle, there are several options, whereby the following are essential:

The decoupling design through galvanic isolation is shown in Figure 3. Galvanic isolation of block 1 and block 2 inserts a very high isolation resistance with a decoupling effect into the ground structure. Therefore, an interference current cannot flow or can only circulate through the coupling capacitance of the transformer. In general it is said that the ground loop is “broken”.

The following types of interference can be eliminated through the use of a DC/DC power module:

EMC – As a result of the spatial extent of the ground loop, e.g. on a circuit board, to a first approximation it can also be viewed as a kind of loop antenna (see Figure 2). This antenna can now both transmit/ output interference, as well as “receive” interference from the surroundings and thus input into the circuit. This loop antenna is eliminated by using an isolated DC/DC power module, as there is no longer any closed circuit path.

Overvoltage/voltage imbalance – If, due to a fault or external influence, the voltage UCC2 increases in block 2 of the circuit, a galvanic connection also increases the voltage UCC1. This may mean the output is irreparably damaged by exceeding the absolute maximum values. By isolating with a DC/DC power module, both voltages, UCC1 and UCC2, are decoupled.

Source overloading – If a short-circuit at the output of block 2, due to an uncontrolled rise in current, causes thermal overload, given galvanic coupling of the two blocks, block 1 (source) is also adversely affected. This can manifest as a short-circuit, such that the output current of block 1 also rises uncontrollably, which in turn could result in thermal overload of block 1.

What does the specification IEC/EN60950-1 in the datasheet mean?

The International Electrotechnical Commission (IEC) defines standards for electrical technologies. The specifications defined this way in a document for a product have to be fulfilled for a certain context. The application of a standard is only mandatory if it is referenced in contracts, guidelines or laws.

IEC/EN means this is a harmonized standard. It is applied both internationally and nationally. Depending on the application or deployment area, different requirements arise for electrical safety, which can be reflected by specific safety standards. The illustration shows the most common standards for the DC/DC low voltage range (see Figure 4). 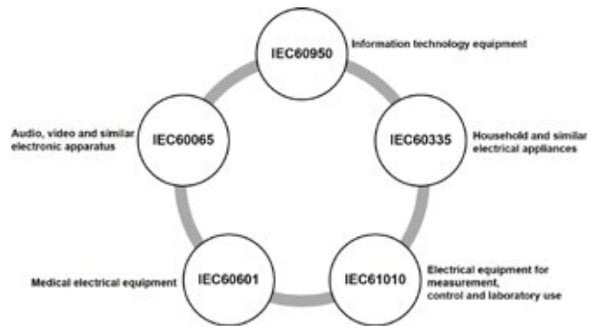 IEC 60950 is a standard that addresses the general requirements for the safety of devices such as computers, adapters, switch-mode power supplies, electrical office equipment and IT devices like printers, copiers, and fax machines. The specification in the datasheet – IEC/ EN60950-1 certified - says that according to the specifications for the product regarding electrical safety, for instance, the product has been assessed and the tests passed. However, such a specification in datasheet says nothing about the quality/type of galvanic isolation. IEC 60950-1 specifies the type of this isolation in function, basic, supplementary and reinforced isolation. Functional isolation ensures the electrical functionality by isolating various supply lines, for example. It does not serve to protect against electric shock when touching the voltages. Basic isolation isolates one of the two terminals, such that protection against electric shock is ensured. Protection only exists as long as the isolation remains intact. If both lines are isolated from each other, such that both terminals have protection against electrical shock, then one speaks of supplementary isolation. Reinforced isolation is provided if e.g. both terminals are in a solid plastic body and there is therefore just “one” isolation.

How is the 4000 VDC for 1s specification to be understood?

Würth Elektronik MagI³C power modules are subject to 100% testing in production to ensure a consistently high level of quality. As one of the final tests, each isolated power module is subjected to a DC voltage of 4000 V for one second. The test is intended to reveal production faults in the area of galvanic isolation. The level of test voltage says nothing about the type of isolation, however - functional, basic, supplementary or reinforced. So the level of isolation voltage cannot be taken to deduce the suitability of the DC/DC power module for certain applications. An example of a frequent misconception is that a DC/DC power module with 4 kV isolation voltage can be deployed in medical technology in the one or two MOOP – Means Of Operator Protection - field. Voltages of 1500VDC and 3000VDC are indeed used here, but only for testing other isolation types. 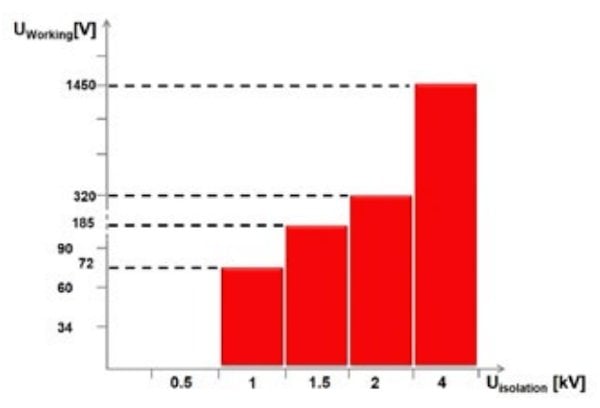 Figure 5: U-isolation is a function of U-working for DC/DC converters

As converters have progressed from their original application as auxiliary voltage supplies to gain a foothold in evermore applications with very diverse requirements, the specified isolation voltages are also higher than the normative specifications. Field bus applications, such as CAN, Interbus, etc., demand even higher robustness of the supplying DC/DC converter with regard to interference, which in turn is reflected in increasing isolation voltages. The MagI³C power modules have to meet an isolation voltage of 700 VDC in their power range, and with a value of 4000 VDC ensure safe functionality for many applications.

Which solutions does Würth Elektronik offer in its portfolio?

The WE-FISM (Fixed Isolated SIP Module) MagI³C power modules integrate transistors, rectifier diodes, the isolated transformer, as well as input and output capacitors. This makes the WE-FISM MagI³C power module very easy to implement in an existing circuit. No further components are needed for the power module function. Values for the filters tested and their component values are listed in the 'Application Considerations' chapter of the datasheet. Würth Elektronik offers a wide product spectrum of isolated converters with functional isolation: 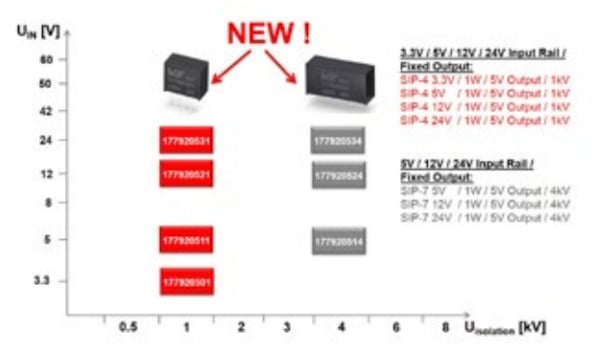 The current portfolio of isolated MagI3C power modules is shown in Figure 6. WE-FISM are currently available with the following data:

This 1 Watt converter is suitable for the following application options:

Timur Uludag works as a Product Manager at MagI3C Power Modules, München und Umgebung, Deutschland. He is particularly skilled at product management, electronics and project management. He earned his Engineer's Degree in Mechatronics at the Regensburg University of Applied Sciences in Regensburg, Germany. He studied accompanying training in medical technology and additional study in international competence also at the same university.