Read on to learn more about the applications of DC/DC converters and the pros/cons associated with the same.

For several years, switch-mode power converters have been used extensively in modern electronics technology across multiple sectors, including industrial, commercial, utility, and consumer markets. For low-power DC/DC conversion-based applications, most modern power conversion is accomplished using three major types of power converters – buck, boost, and buck-boost. However, specialized applications use advanced combinations or enhanced variations of the conventional topologies. There are several DC/DC converter topologies in the literature, but there is no one solution that caters to all the applications. Conversion techniques, in general, have found a wide array of applications in industry, research and development, and daily life [1].

Pros and Cons of DC/DC Converters

DC/DC converters form a key aspect of study in the field of power electronics and energy drives as they are widely incorporated in several industrial applications. Some of the applications are illustrated in Figure 1. High voltage gain converters are employed in multiple sophisticated applications, including radar systems, DC distribution systems, data centers, and harnessing renewable energy [2]. This is especially crucial in the case of renewable energy applications as high voltage gain DC/DC converters facilitate boosting of the voltage that makes it suitable for integration with the distribution system. DC distribution in general offers a multitude of advantages including a reduced number of conversion units, price, and enhanced power quality, making it a preferred choice for a good range of applications. 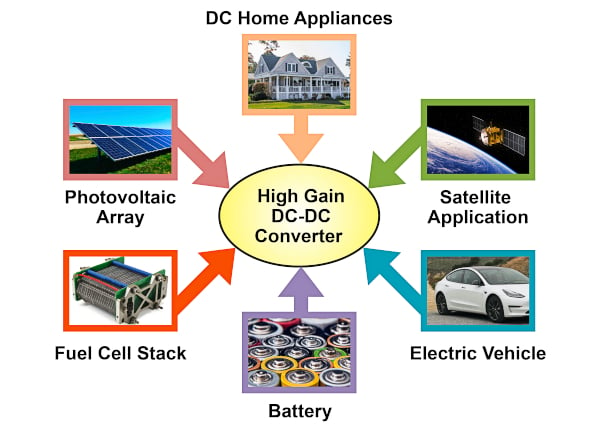 It is important to note that the design goals of power electronic converters, in general, vary from application to application. However, the most common criteria include maximizing performance and enhancing power density while reducing the overall cost. Also, the operating conditions need to be taken care of, including environmental considerations and operation at a suitable frequency where core losses and switching losses are minimal. Ripple reduction should be taken care of for both voltage and current, along with heat dissipation and electromagnetic interference so that power density requirements can be fulfilled. Some of these aspects are summarized in Table 1 [2].

Renewable energy applications: The DC/DC converter topologies employed for renewable energy applications need to draw continuous and smooth input current so ripple reduction can be achieved. It should also be able to integrate with different types of power sources. Non-isolated interleaved high voltage gain topologies are typically employed for interfacing renewables and microgrids [4].

Medical devices: Isolated DC/DC converters are crucial in applications where safety is a critical aspect. This is essential for separating the output from dangerous voltages on the input side. However, non-isolated converter topologies can be employed for applications like the power supply of an x-ray system.

Vehicles: In the case of vehicles, the main DC/DC converter changes power from the onboard high voltage battery into lower DC voltages used to power lights, wipers, and window controls [5]. This is true for both electric vehicles and hybrid electric vehicles. Isolation is crucial in cases where separation of control systems is essential from high voltage domains. Buck-boost converters are utilized for step-up or step-down, and charge-pump converters are used for voltage inversion.