This article explains the zero overvoltage switching effect and gives insights into key aspects and applications.

Turning off an electrical path is causing trouble by parasitic inductance since the beginning of power electronics. Ages are spent to avoid oscillations and voltage overshoot while compromising on switching speed. Other research is focusing on low-inductive packaging technology, which is a good idea but will not finally eliminate parasitic inductance.

In contrast, the Zero Overvoltage Switching “ZOS” method offers a solution to unleash unlimited switching speed in real-world applications without overvoltage on the semiconductors. Moreover, in best case, it is even avoiding any subsequent parasitic oscillation. The idea is to use the intrinsic parasitic inductances and parasitic capacities to build up a resonant circuit. The turn-off event excites the resonant circuit and the free-wheeling diode stops it automatically after half a period, e.g. after a view nanoseconds. These resonant parasitic elements are thereby utilized to switch off a fixed current in a lossless, overvoltage free, and EMI compliant way. By designing the circuit and parasitics properly, there is no extra component necessary and even relaxed industrial style semiconductor housings and low-budget link capacitors can build up the circuit, as parasitic inductance is now a functional part of the topology.

The technology focuses on the transistor turn-off event. To simplify the problem, the ZOS approach is described for a boost converter, as seen in Figure 1. In classic switching technology, the turn-off event is characterized by a specific turn-off switching time of the transistor Tbot, which causes the midpoint “MP” voltage to rise. To commutate the phase current IL from the transistor to the diode, an additional overvoltage occurs, forcing the current through the freewheeling path’s parasitic inductance Lpar. The amplitude of the voltage overshoot is given by the parasitic inductance, switching speed, parasitic capacities, and turn-off current. 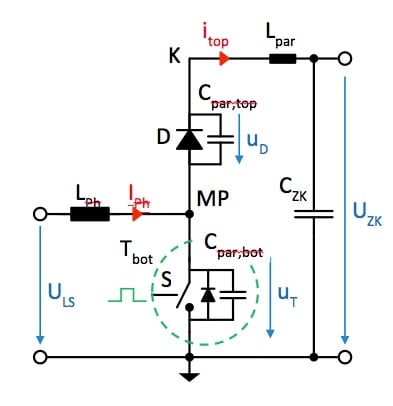 Not considered in this classic description is the freewheeling diode’s parasitic capacitance. While voltage at the midpoint is rising, a specific current starts to flow through Cpar,top. Turning off the transistor faster increases that current. When this current is large enough, the current commutation is done during voltage is rising, even without any voltage overshoot. The ZOS waveform has three steps: 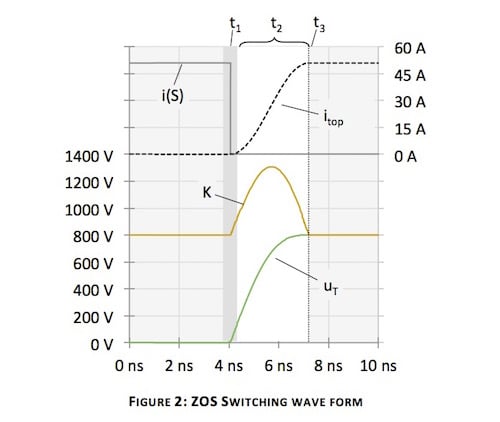 To convert the circuit into a ZOS Cell, the following design rules must apply. Figure 1 shows the parasitics, which are now part of the topology. The low side transistor Tbot is sketched as an ideal switch S next to additional (body-) diode and Cpar,bot and may represent a fast MOSFET for example.

One ZOS showcase is a simulation experiment varying the gate resistance Rgate. Following classic theory, increasing the gate resistor lowers voltage overshoot. Following the rules of ZOS Cell design instead, overvoltage can be decreased against all expectations by lowering the gate resistance (and raising switching speed). By that approach, the simulated losses can be cut down to about 2 % of the nominal datasheet losses by applying an external Rgate of about 1 Ω additional to the internal chip resistance, instead of 20 Ω recommended. The simulation turns off the optimum ZOS current of 84 A using the 25 mΩ C2M0025120D Cree SPICE models with CPW41200S020B diodes parallel in half bridge configuration. The commutation loop inductance is 20 nH, link voltage is 800 V. 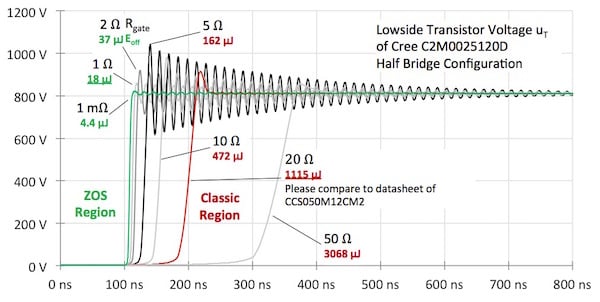 Claiming overvoltage may disappear by increasing switching speed, adding parasitic inductance and ramp up the current is a very tough job resulting in disbelieve and shaking heads. That’s why a proof of concept test setup was build. The setup available has a drawback of 4,3 Ω gate resistors per chip while optimum would be below 1 Ω. To compensate this issue as far as possible, -10 V negative gate voltage (instead of -5 V) was applied to switch off faster. 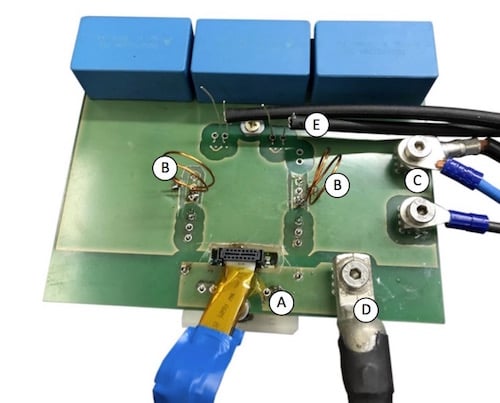 The current IPh was alternated by changing the on-time and thereby ramp up different current values. Figure 5 shows a turn-off current of about 48 A. In Figure 6, an even larger current of about 68 A is turned-off, but parameters are hitting ZOS operation point. 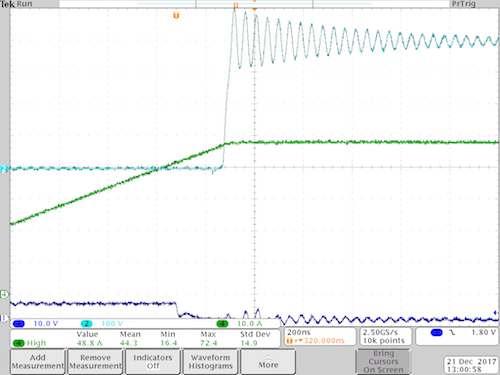 Figure 5. Turning off a non-optimal current 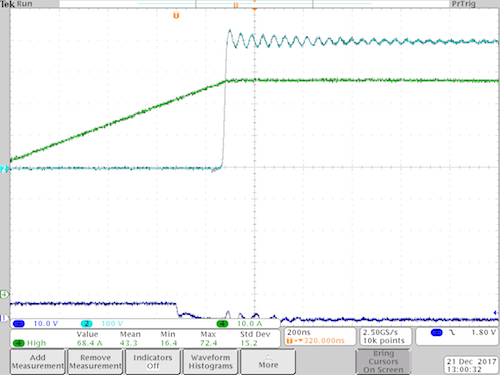 Figure 6. Turning off the ZOS-optimized current

The key point of these rules is the unlimited switching speed, that allows cutting losses down to zero. Combined with classic Zero Voltage Switching (ZVS) during turn-on, it is possible to build up a real-world converter without significant switching loss at all.

The ZOS technology can be used in every converter technology being able to control the current during the turn-off operation point. That is possible for nearly any classic isolated and non-isolated Buck-, Boost-, Forward-, Phase-shift, even Flyback- and other DC-DC converters from zero watts Point-of-Load converters to megawatt switching cells. Even load regulation is possible, implementation is more easy for constant-power applications like LED illumination or on-board chargers.