Single stage topologies are the designer’s choice for the lower power LED drivers. A new study of Cree C3M technology suggests the same single-stage topology could be extended well beyond what was previously possible.

For high-bay and outdoor lighting fixtures, the cost of the LED driver electronics is reported to be 17% of the total fixture cost. An additional 40% of the fixture cost is contributed by the mechanical, thermal, and electrical portions of the fixture [1], which help support the weight and volume of the LED driver, as well as protect the driver against surge events. New innovations in MOSFET technology enable rugged LED drivers that are also smaller, lighter, and cheaper than existing devices, bringing significant cost reductions to high-bay and outdoor lighting fixtures.

Cree introduced a new 900V class of SiC power MOSFETs that are well suited for high-efficiency switch-mode power supply applications, such as LED lighting. The new SiC MOSFET family is based on Cree’s third generation planar SiC technology. Design improvements in this generation of SiC MOSFETs include a smaller cell pitch, an optimized cell structure, and increased blocking-layer doping levels that minimize resistance. The median specific on-resistance of the 900V SiC MOSFET is 2.3 mΩ∙cm2, which is a 42% reduction over the previous generation, and the lead product (C3M0065090D) features the lowest on-resistance rating (65mΩ) of any 900V MOSFET device currently available in the market.

The transconductance of the 900V SiC MOSFET is improved by engineered MOS channel structure so the device is fully turned on at VGS = +15V at 25°C and +12V at 150°C . In power supply applications, this eases the gate drive requirements for 900V SiC MOSFET when compared to previous generations of SiC MOSFETs, which required +18 to +20V gate bias for full enhancement. Additional improvements were made to the high-voltage reliability of the SiC MOSFET by minimizing the internal electric fields under reverse bias. 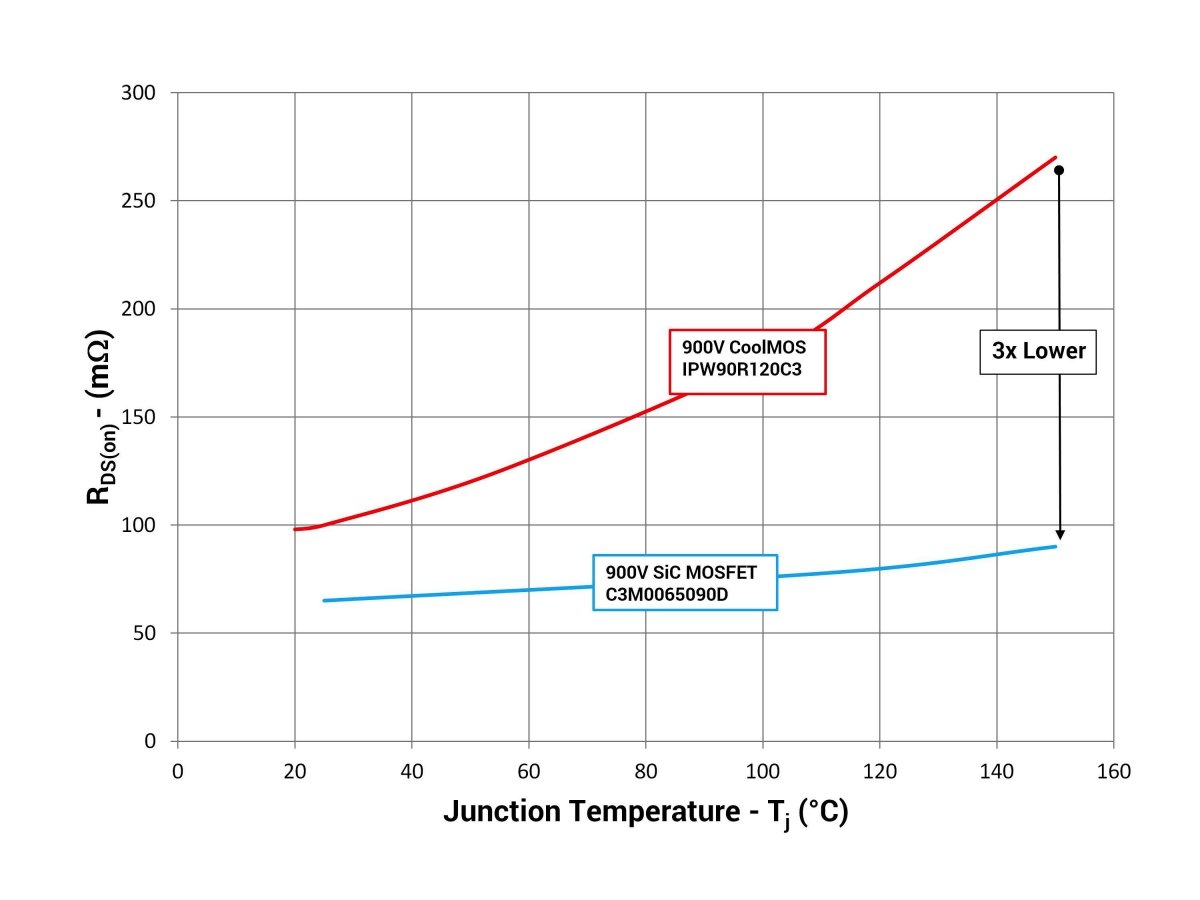 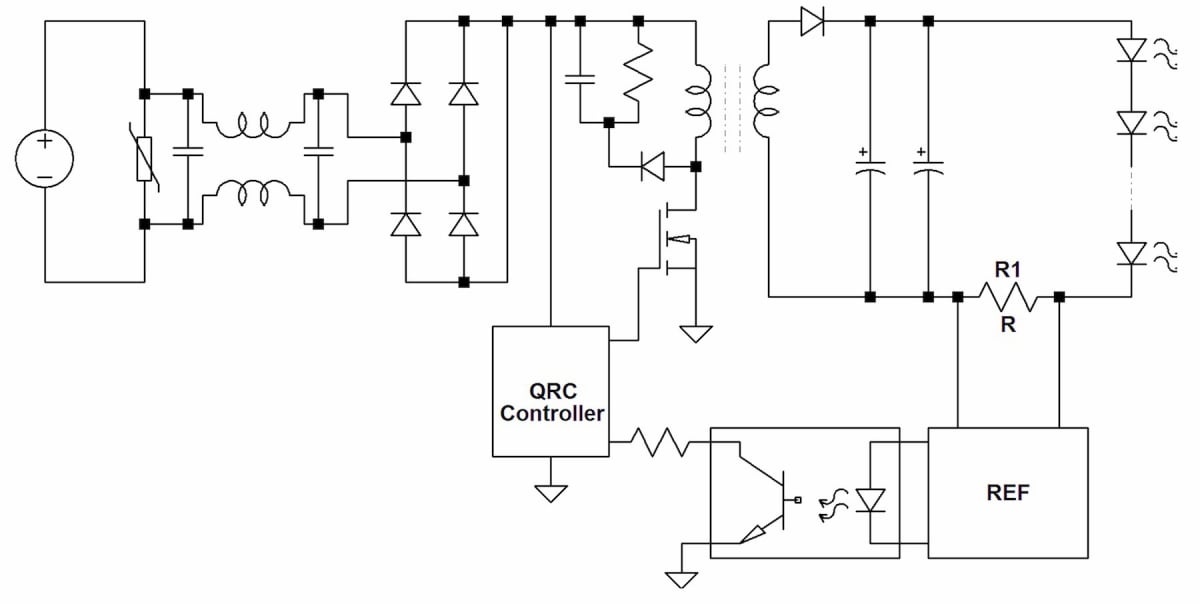 The power semiconductor switch performance within the driver has a significant impact on where the price/performance boundary between single- and two-stage topology is established. For current silicon (Si) superjunction MOSFET technology, this boundary appears in the 75–100W range. For third-generation silicon carbide (SiC) MOSFET technology which significantly outperforms Si devices (see Table 1), the price/performance boundary between single- and two-stage topologies is about 3x higher: 250–300W. 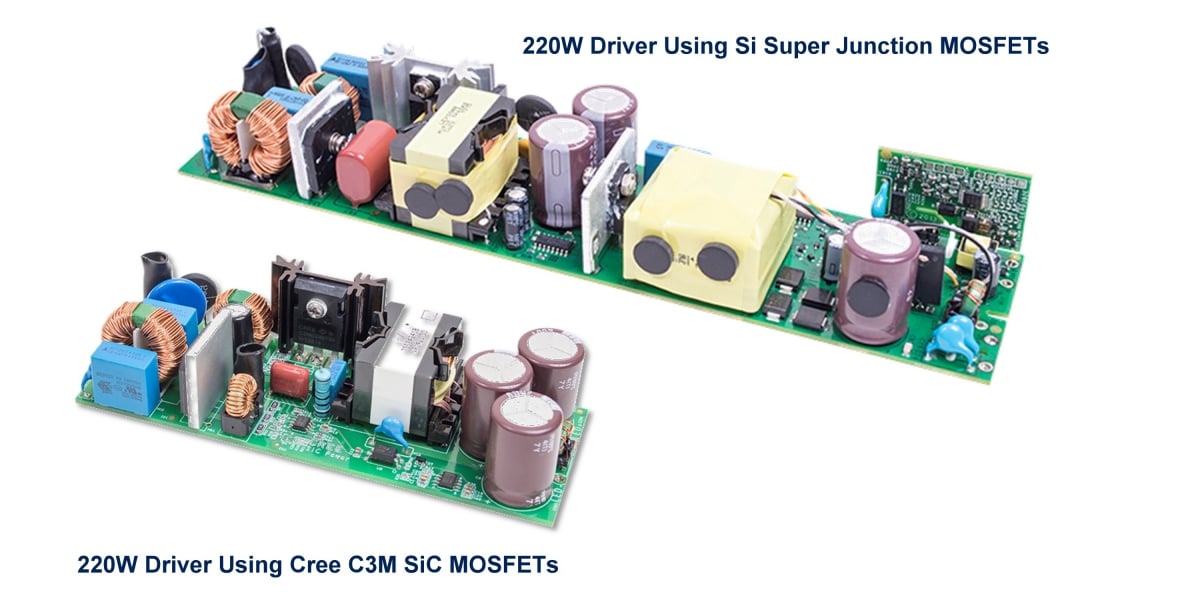 Five key limitations and challenges must be overcome in order to implement a single-stage topology in high power LED lighting: 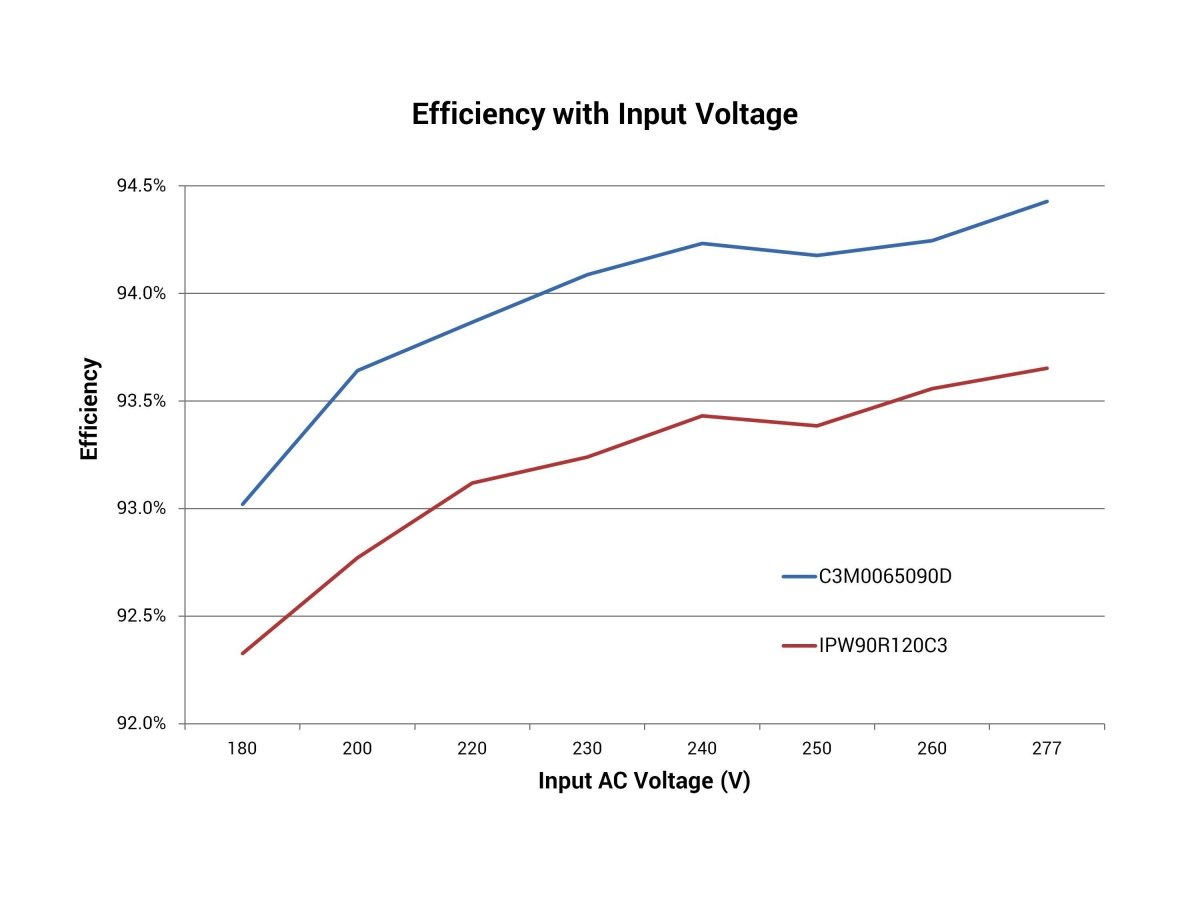 One common perceived challenge of a single-stage high power LED drivers, is the need for more expensive Electromagnetic Interference (EMI) filters. The EMI signature of a flyback configuration is higher than that of a continuous conduction mode (CCM) boost Power Factor Correction (PFC). However, it is important to note that the EMI signature of a QRC flyback is similar to the EMI signature of the discontinuous conduction mode (DCM) boost PFCs typically used in two-stage LED drivers. It is also common knowledge that QRC flyback drivers operate using a variable switching frequency and have a reduced EMI spectrum compared to fixed-frequency flyback drivers. This spectrum reduction results from the spreading of RF emission over a wider frequency range as the switching frequency (and its harmonics) shift throughout the AC line cycle.

In Figure 5a shows the theoretical EMI signature of a two-stage topology with a DCM boost PFC first stage. Typically, the switching frequency of the first stage is 60–150 kHz in order to keep the fundamental switching frequency component from approaching the lower EMI frequency limit (150kHz). However, two-stage LC EMI filters are generally required in order to reduce the spectrum of the second, third, and higher order harmonics for EMI compliance. As illustrated in Figure 5b, the higher operating frequency (>200 kHz) enabled by SiC MOSFETs with the same EMI filter design used in the two-stage topology can deliver an extra 15dB attenuation for the first harmonic, 35 dB attenuation for the second harmonic, and 40 dB attenuation for the third harmonic, enabling the single-stage topology to reach EMI compliance without additional EMI filter cost. Additionally, a careful look at the two power supplies in Figure 3 also shows that the two-stage solution and the single-stage solution with SiC MOSFETs have similar EMI filter sizes (and hence costs). 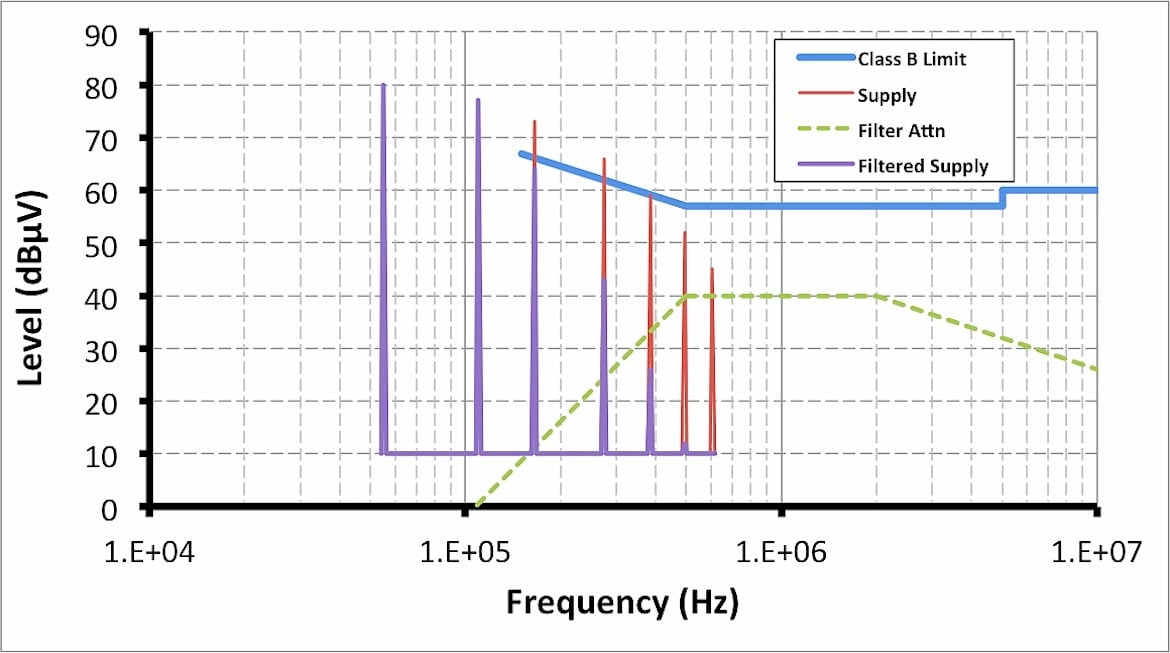 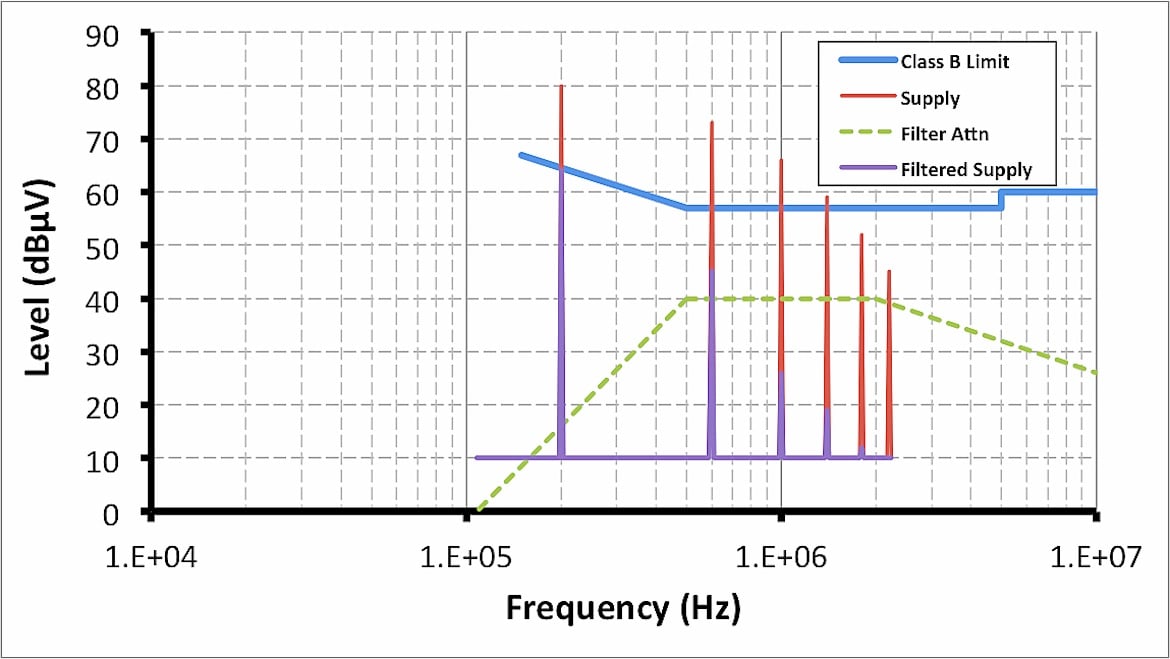 Another challenge of a single-stage topologies vs. two-stage topologies is the output current ripple. Line frequency output current ripple translates into light output variation (i.e., flicker) for the LED array so the Alliance for Solid-State Illumination Systems and Technologies (ASSIST) has established maximum light flicker acceptability criteria. Current ASSIST guidelines state that light flicker greater than ±10% percent at 100Hz and greater than ±15% percent at 120Hz is unacceptable [2]. To meet these criteria and minimize light flickering, LED drivers must minimize current ripple. 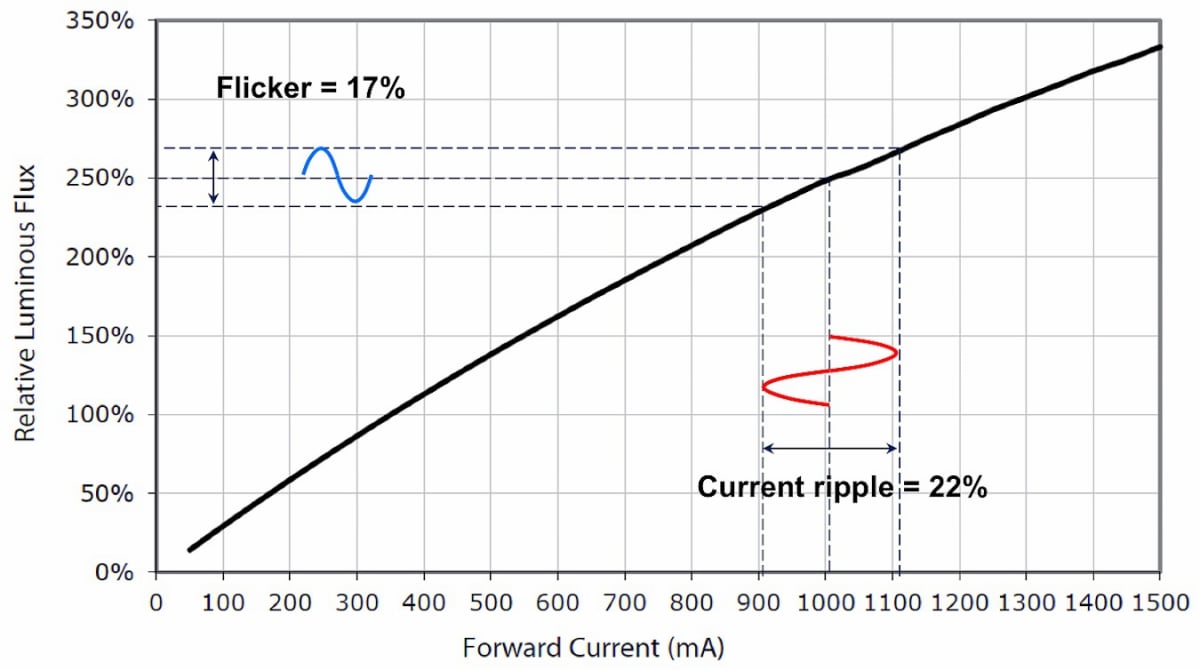 Two-stage topologies have a large, high-voltage DC link capacitor that is used as a line frequency energy buffer. The second stage is used to compensate for voltage variations in the DC link capacitor and to reduce output current ripple to ±5% via a high-bandwidth current control loop. Single-stage topologies do not employ high voltage DC link capacitors, but instead, use their output capacitors as energy storage elements. The control of the output current is implemented as a low-bandwidth average current control loop, which is typically not capable of compensating for line frequency current ripple. This topological limitation cannot be addressed by simply changing power MOSFET technologies. However, the output current ripple can still be minimized in a cost-effective manner by minimizing output voltage ripple via output capacitor sizing and the proper tuning of the current control loop.

The output capacitors in this SiC single-stage flyback driver are the same as the capacitors used in the DC link and output sections of the Si two-stage driver (See Figure 2). As such, both driver approaches have the same capacitor cost. Adding output capacitance could improve current ripple without significantly impacting cost, though, as capacitors represent only 8% of the total BOM cost, and reducing input current total harmonic distortion (THD) could reduce current ripple an additional 8–10% with no additional BOM cost while still meeting EN61000-3-2 standards. 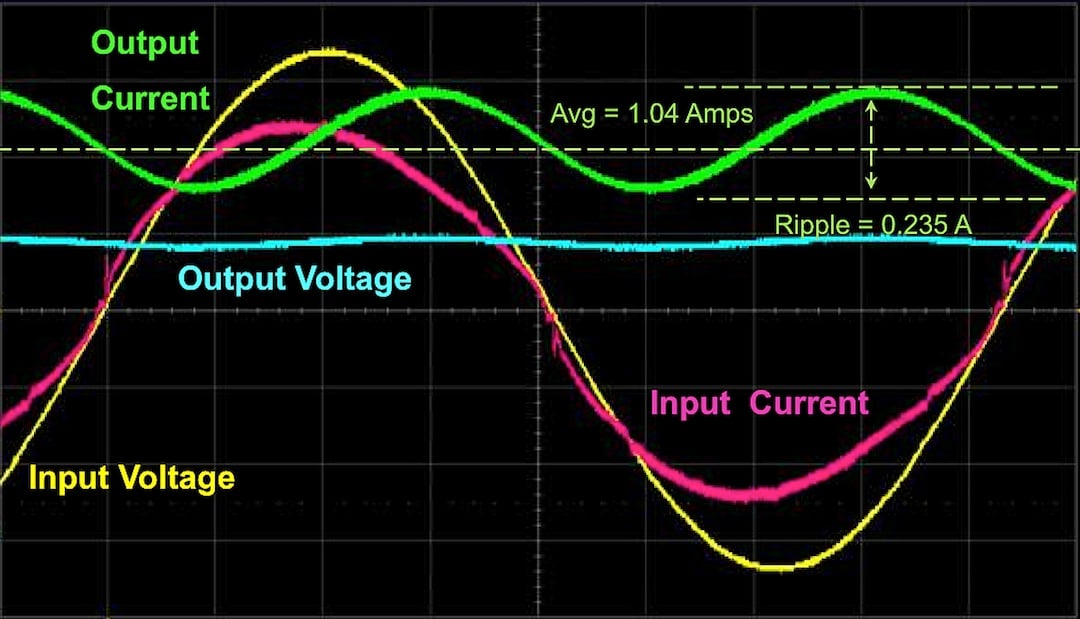 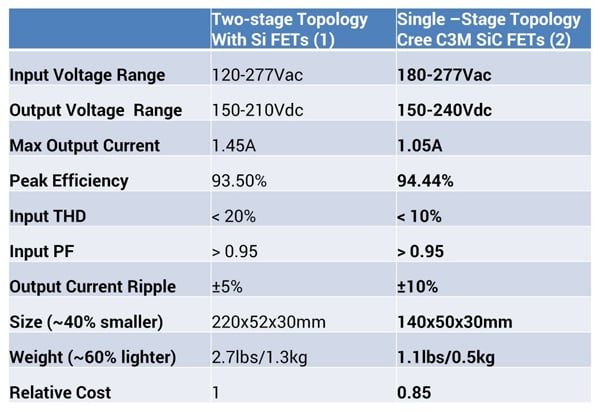 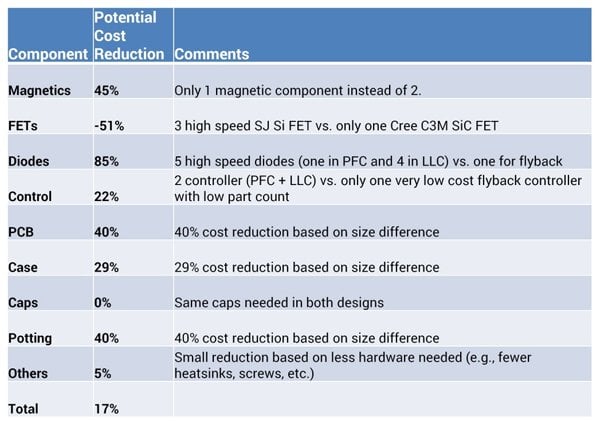 Marcelo Schupbach works as the Technical Marketing Manager at Cree Inc. where he leads a cross-functional global team tasked with the development of applications that demonstrate the benefits of Wolfspeed SiC MOSFET technology, support key customer with internal evaluation of Wolfspeed SiC MOSFET technology, and also lead development of power module activities including product roadmaps and market development activities. He holds a Master's Degree and a Doctorate in Electrical and Electronics Engineering both earned at the University of Arkansas at Fayetteville.