Aiming to get the right technology for lighting dimmers applications, here we investigate the impact of the main parameters (and so to the MOSFET technology generation) on the electrical and thermal performance, and the EMC emission for a commercial 300W lighting dimmer.

Lighting dimmers are top-selling products in the North American market. They are widely used to trim the lamp brightness in every home. Thanks to the use of dimmers, money on energy expenses and maintenance costs could be saved.

In this kind of application, the MOSFET is used like a controlled switch aiming to partialize the sinusoidal voltage to supply the load (led or halogen lamp), with a corresponding variation in brightness. Recent changes to the lighting industry are pushing LED on the market thanks to the improvements to this technology to push the efficiency and durability to new standards.

With LED replacement of older halogen lamps some problems could rise on the dimming system.

Trying to solve flickering, strobing and early burnout of LEDs systems, new control strategies have been developed on the modern lighting dimmers.

The classical TRIAC control strategy “forward phase” has been flanked and, in some cases, replaced by the modern dimmers working on “reverse phase” technique.

In both case the switching frequency of the MOSFETs inside the dimmers is very low because of the sync. with network frequency (50-60Hz) so the switching performance of the switches is not so important with respect to other parameter like the statical Ron resistance or the EMC behavior

The lighting dimmers are devices connected between the home network and the light fixture and they are used to regulate the brightness of lights inside the home.

They partialize the voltage waveform applied to the lamp to lower the intensity of the light output.

There are several types of electronic dimmers working with different devices (TRIACs or MOSFETs) and different strategies since each type of lighting source has individual characteristics, but in any case, there are mainly two strategy of lamp load adjustment based on the following types:

Here the dimmer partializes the initial part of the half wave, so the electric current is deactivated in the front part of the AC input waveform immediately after zero crossing.

The forward Phase Dimming was the control strategy used by the TRIACs and initially used for all dimmers, they work best with traditional incandescent and halogen lights.

A smooth turn on of the MOSFET is preferable to minimize EMC emissions.

This is a classical method, and it is generally suitable for the regulation of: 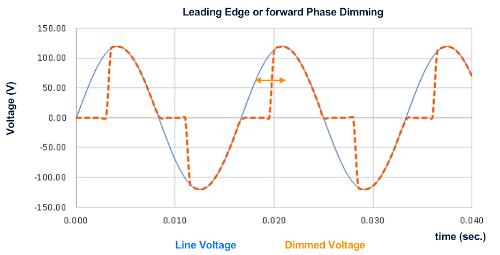 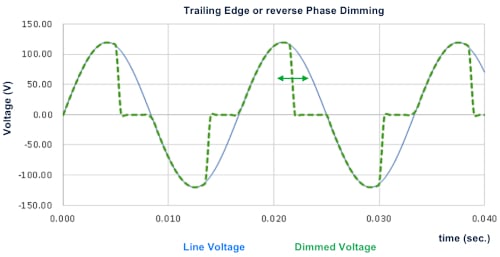 Here the dimmer partializes the final part of the half wave, so that the electric current is turned off at the end of the AC input waveform just before passing through the zero crossing. This method is generally more suitable for the regulation of electronic transformers for low voltage / incandescent / halogen lamps (halogen or LED). Electronic Low-voltage (ELV) are assimilable to a capacitive load.

The reverse mode strategy was developed to avoid or minimize the flickering on the LED lamps in some specific cases, for this reason Trailing edge dimmers work best with LED lights.

In this kind of dimmers, a smooth MOSFET turn off is preferred to minimize the EMC emissions.

A commercial Dimmer Trailing Edge, reverse Phase-Dimming topology 300 W, 120VAC, 60Hz for the USA market has been used like a test vehicle and a dimmable LED load lamp ≈300W 120VAC has been coupled to the dimmer for these tests.

In order to perform the test and be able to measure temperatures, voltages and currents on the boards they have been disassembled and the power devices have been reworked and mounted in the right way.

In any case no changes have been made on the original driver stage circuit.

All the MOSFETs are assembled in TO220-FP.

Figure 2. Wiring Diagram for a commercial dimmer and power stage inside the dimmer. Image used courtesy of Bodo’s Power Systems

The dimmer is a very simple black block with three terminals (plus ground) connected like the below schematic. It has a mechanical switch to turn on/off the source and a slider used to dim the light to the preferred level.

Two MOSFETs are used inside the dimmer for each channel, they are connected in back-to-back topology since the dimmer must be able to work bidirectionally following the network voltage. A driver stage is used to drive properly each gate with the correct timing according with the light level set by the user.

The system efficiency, switching energy (at turn-off) and the case temperatures of the switches has been measured in the whole power range from 30W to ≈300W.

The EMC emission has been measured at 150W of Power output since this is the point with maximum Id current in the Power MOSFET at turn-off. The Id commutation current level could impact to the EMC performance.

The temperatures have been measured with a thermal camera in steady state.

The table show the main parameters for the MOSFETs under comparison.

System efficiency is quite the same for the two MOSFETs in the whole range of power output.

Measuring the case temperatures of the MOSFET (without heatsink), the differences between the two devices are less than 1 Celsius degree in the whole range.

For the switching energy at turn-off, of course the fast MOSFET is able to perform fast switching with respect to the slower MOSFET.

Since the switching frequency is 120 Hz these energy losses are negligible with respect to the static conduction loss (Rds_on) and do not impact the system efficiency.

For optimal results the test has been performed inside an anechoic chamber in order to minimize the environmental noise.

Clearly arise that the faster MOSFET gets higher levels of emissions on the whole range of frequencies (150KHz-30MHz).

A standard NF family MOSFET by STMicroelectronics has been compared to a fast MOSFET in a standard lighting dimmer for USA market.

Despite the competitor MOSFET has faster turnoff both system efficiency and case temperatures of the MOSFETs are quite the same.

A fast-switching transitions associated to the latest technology available on the market, generates higher EMC emissions that can easily exceed the mask CISPR15 used for this kind of lighting dimmer applications.

The well-established technology like NF can be easily sustain this kind of application since it is able to give the same performances of a fast technology but with less noise and EMC emissions, it represents the appropriate solution for light dimmer. In addition, a fast and highly optimized technology for Rds_on per area could be less robust during line transient due to the smaller silicon area and consequent lower thermal capability.