In a news release provided by technology giant Panasonic Holdings Corporation (Panasonic), the company says it is putting its factory of the future to the test. Combining Tesla Megapack energy storage, solar technology, and hydrogen fuel cells, Panasonic’s Kusatsu plant is intended to power up sustainable manufacturing based on renewable energy resources. 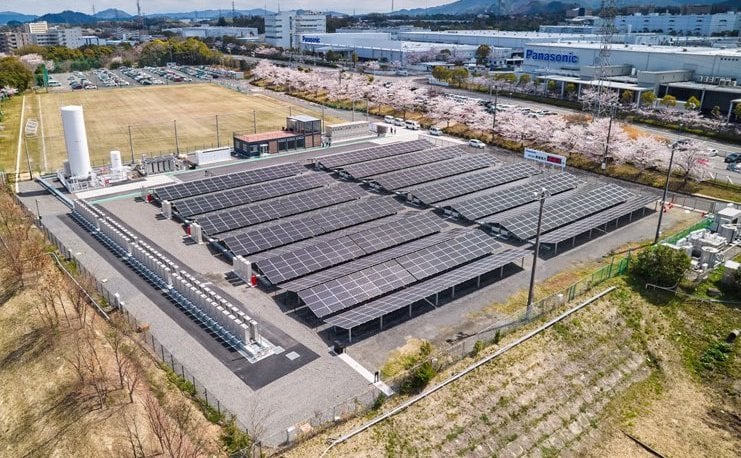 The Kusatsu Plant and Hydrogen Power

Panasonic’s Kusatsu plant in Japan’s Shiga Prefecture began operations in 1969, manufacturing household goods. Today, it covers an area of 52 hectares, with the H2 Kibou Field facility occupying a part of the site. The significance of the H2 Kibou site relates to this generation’s push toward hydrogen power generation from renewable sources to power the future of manufacturing.

The H2 Kibou was constructed to demonstrate Panasonic’s solution contributing to the global renewable energy initiative RE100. The H2 Kibou facility combines hydrogen and solar technologies with 99, 5-kilowatt (kW) hydrogen fuel cells making up a 495 kW array, a hydrogen fuel tank providing a capacity of 78,000 liters, and photovoltaic (PV) generators providing approximately 570kW. The PV cells are arranged in such a way as to capture the maximum amount of light, while lithium-ion battery storage (at 1.1 MW) also pervades the H2 Kibou facility.

According to Panasonic, the H2 Kibou provides enough power to keep its fuel cell factory running. The site’s annual usage comes in at 2.7 gigawatts, and its peak power is around 680 kW. Approximately 80 percent of the power generated from the facility comes from the fuel cells, while the rest is attributed to solar technology.

The consumption of hydrogen is vast, with an estimated 120 tons of hydrogen per year. Eventually, Panasonic hopes to expand its renewable energy-powered solution to contribute further to a decarbonized society.

For example, depending on whether it is sunny or cloudy, the EMS may use more or less energy from solar power generation, hydrogen, or battery energy storage to meet plant requirements.

As highlighted in a film by the Economist, while heavily disputed, hydrogen gas produced this way could provide a temporary make-shift bridge toward truly clean, green hydrogen produced from renewables.

Some argue that hydrogen fuel does more harm than good as current methods for its generation require a greater input of energy than is given out at the end of the process. Despite this, the governmental push for net-zero emissions worldwide is driving research and investment into improved techniques for generating, storing, and using hydrogen.

Hydrogen can be separated from oxygen by applying electricity to water in a process known as electrolysis. Image used courtesy of Panasonic

The Kusatsu site receives 20,000 liters of cooled liquid hydrogen from Osaka every week, traveling a distance of around 80 kilometers (km). While previously relying on Australia and other countries for hydrogen supplies, another supply hub has opened up near Osaka for green hydrogen production. This effort resulted from the partnership between Iwatani Corporation, located in Osaka, Japan, and the multinational energy corporation, Chevron.

Hydrogen is currently more costly than electricity from the grid to run a power plant. Green hydrogen production does not produce carbon dioxide emissions. Panasonic is preparing itself with its existing hydrogen set-up until improvements in distribution and supply lower its cost.