PV based power plants are relatively expensive solutions in the market of energy generation technologies. Low voltage components and cabling of the arrays are a significant part of the cost of the PV installations. Many studies have concluded that increase of the inverter voltage, and thus system voltage from 1000V to 1500V offers opportunities to reduce the initial PV array cost by reducing the number of low voltage components and the total cabling needed. The system also has the potential to be more efficient at the grid or the DC side. This aspect is already known from power systems that when voltage levels are increased, ohmic losses are decreased. Typical cost savings for 1500V PV installations are shown in Figure 1. 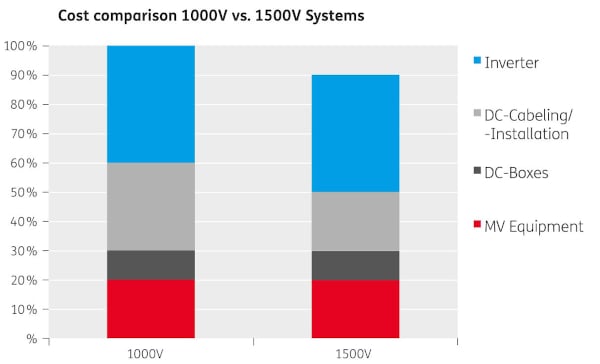 While 1500V is becoming the mainstream for solar inverters (central and string), this new voltage requires careful consideration with respect to creepage and clearance of the power modules and the DC link assembly as well. Also, the new requirement from solar inverter is to operate at near-zero power factor. This fact needs to be accounted for when selecting the modules.

Consequences on the Inverter

Increasing the system voltage from 1000V to 1500V increases the output voltage of the inverter. While the open circuit voltage is 1500V, extracting full power or Maximum Power Point (MPP) voltage range could vary from system to system and mission profile. Hence, this will impact the selection of the appropriate topologies to meet system requirements. This, in turn, influences the choice of the power modules.

Various topologies are available to address higher DC voltages. Two level topology equipped with 1700V devices is the most common and basic configuration. This is shown in Figure 2.a. Its performance and limitations are well known due two level output waveform, high filtering requirement and low efficiency.

To improve the performance of the solar installations, industry-standard three level topologies could be utilized. One solution consists in adopting transistor clamped topology, 3L-TNPC. This topology is obtained by inserting two switches in common emitter configuration between the AC terminal and the midpoint of the DC link referred as N, Figure 2.b Another option is the adoption of three level neutral point converter, 3L–NPC as shown in Figure 2.c This configuration has two additional clamping diodes that allow impressing half the DC link voltage across all the switches.

In this section, by way of a concrete example, various topologies are compared under the same operating conditions.

In this example, Semikron’s SEMiX® platform is considered.

SEMiX® platform is flexible and well suited to address numerous requirements in one housing. It is also an Industry-standard module which allows compact inverter designs. Here, two level topology implemented in a SEMiX®3 Press-fit package, Figure 3a and three level topologies (NPC or TNPC) are realized with SEMiX®5 packages, Figure 3b. Both packages are available with press-fit pins for ease of assembly and manufacturing. 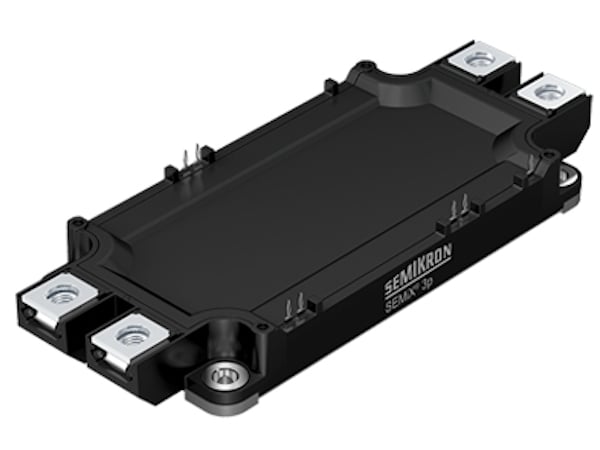 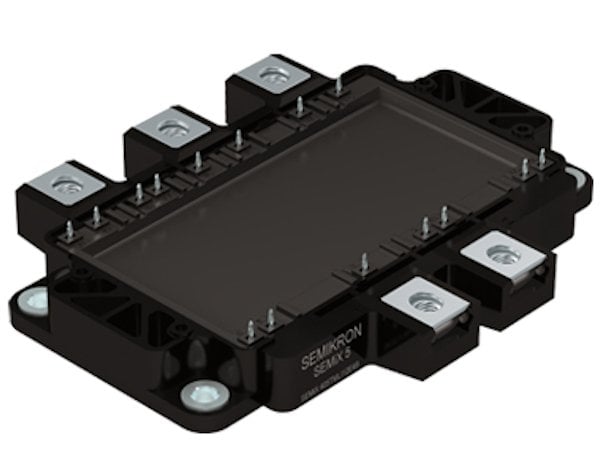 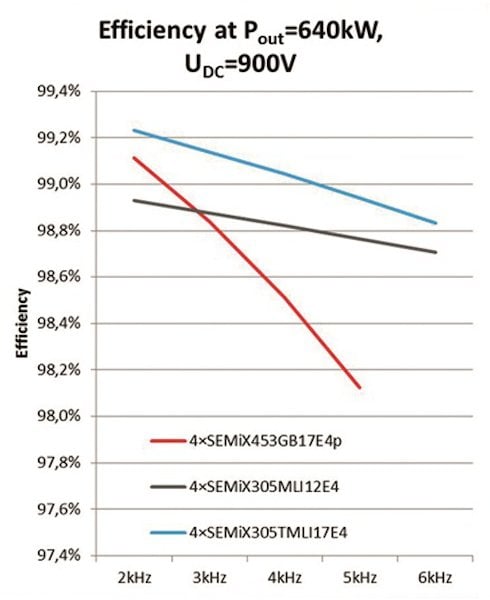 The modules are equipped with Trench 4 medium power IGBTs (E4 type) and with Semikron’s CAL4F Diodes. Efficiencies at 900V and 1200V DC bus are shown in Figure 4a and 4b respectively. Results show that the three level topologies have lowest semiconductor losses when switching frequency is higher than 3kHz. 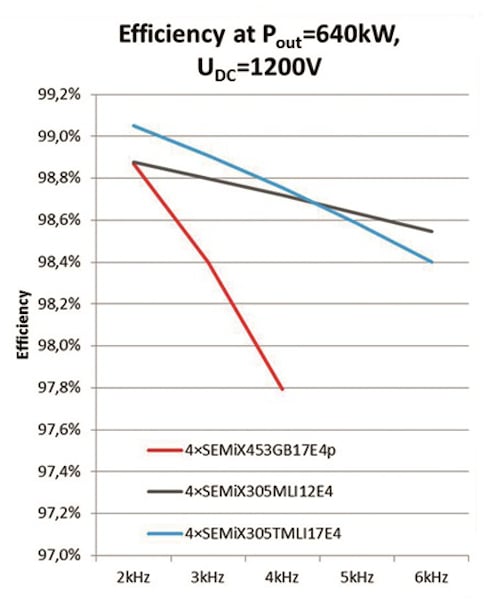 Unfortunately, calculating efficiencies of various configurations will not permit the design Engineer to decide which topology is optimum. This is due to the fact that mission profile is not accounted for and cosmic ray failures are excluded. Evaluating these aspects will lead to the optimal topology.

FIT rate caused by cosmic rays of Semikron’s 1700V CAL4 diodes and their superior robustness compared to competitor’s diodes is well documented in [2-3].

It is worth to note that 2-level and 3L-TNPC inverters are operating with the same chip voltage. However, the lower cosmic ray failure rate of the TNPC compared to the 2-level system is based upon less 1700V chip area (66%) because the duty cycle of the 1700V chips is lower due to additional neutral current path. Further, if the altitude is above the sea level then the intensity of the cosmic rays increases and follows approximately an exponential curve. Typically, one can state that the failure rate increases by a factor of two for 1000m elevation gain. Hence, the cosmic ray failure rate of solar filed installations at high altitude is significantly higher.

Based on the above study and calculations, 3L -TNPC based systems have the best efficiency, and is characterized by simple and proven inverter design and an acceptable cosmic ray failure rate and also thanks to superior cosmic ray robustness of Semikron’s CAL4F diode technology which plays an important role in further improving inverter reliability.

3L- NPC systems have high efficiency at high switching frequencies and due to the fact that cosmic ray failures can be neglected in our view is the best solution. The disadvantage of this system is a complex inverter design. However, the topology is well established in the industry and the technology is proven already. The 2-level inverter stands out due to its simple design (driver and controller) and the most cost effective solution of semiconductors (filters neglected). Disadvantages are due to its limited performances: i) lower switching frequency ii) higher cosmic ray failure rate compared to the 3-level solutions.

In summary, the strength and weaknesses of each topology could be summarized as follows:

It follows from the discussion above that 3L-NPC 1200V should be the preferred solution from reliability point of view and when operation at higher DC voltages is required to harvest maximum energy from PV panels.

These modules are ready to be used in string and central inverters. Hence, a wide power range in solar installations is covered.

Semikron has recently introduced an elegant solution that overcomes the challenges associated in paralleling three level NPC inverters. This approach is suitable to build scalable and modular phase legs. Semikron’s concept takes advantage of the symmetry in the NPC topology and uses two half NPC topologies referred as MLI TOP and MLI BOT. Each half MLI topology is implemented in its own module as shown in Figure 5. Two different platforms are available to implement 3L-NPC with the new approach. The first one is the use of Semikron’s 2nd generation SEMITOP® module in E2 package and the second one is based upon SEMITRANS®10 package. Both modules are industry standard modules and are suitable for 1500V solar inverters. 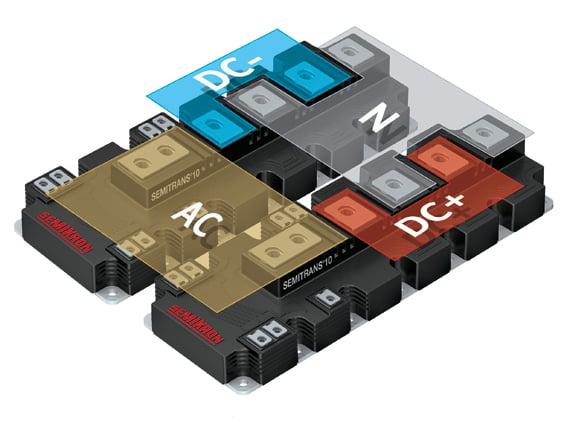 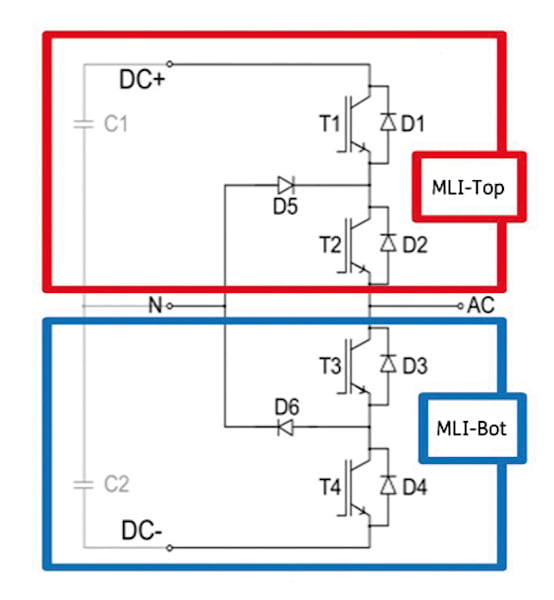 In central inverters, the trend is for higher DC voltages by means of over paneling to increase the annual yield of energy. As already mentioned above, here the 3-L NPC topology is the best solution. For these types of inverters, Semikron introduced the SEMITRANS® 10 MLI modules where the NPC topology is split to two halves. With current rating of 1200A and the use of 1200V medium power (E4) IGBT chips in combination with Semikron CAL4F diodes SEMITRANS® 10 MLI enables air-cooled power blocks up to 750kW without paralleling of modules. Similar to Semikron’s standard SEMITRANS® 10 modules, MLI version modules utilize an advanced baseplate soldering process to create a very robust package for passive temperature cycling to increase the lifetime of the modules also in harsh environment. 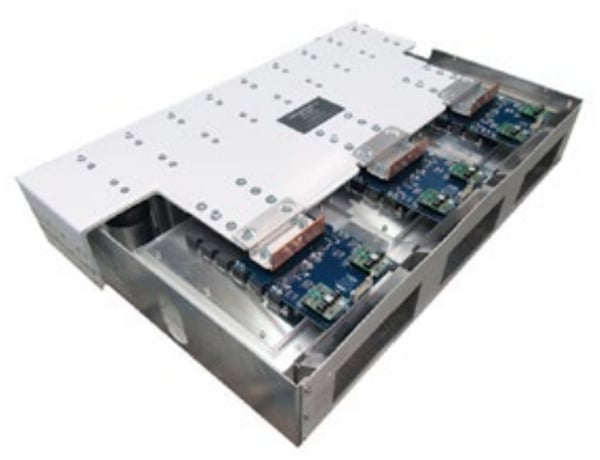 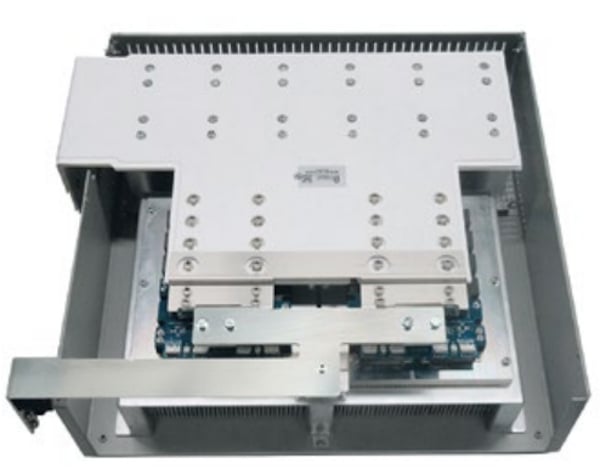 This compact solution based on two SEMITRANS® 10 MLI modules allows an easy DC-link connection and low stray inductances. About 24nH for the outer switches and 64nH for the inner switches are responsible in lowering overvoltages in the inverter.

Compared to competitor solutions using three modules with the same packaging technology like SEMITRANS® 10 MLI this brings significant benefits which are: lower losses, less space and simpler design. The efficiency can reach 98,8% @ fsw=5kHz and up to 99,0% with fsw=3kHz, and modules exhibit up to 15% lower junction temperatures when compared to competitor modules or available industry solutions.

Also, the driver effort is clearly reduced by using only two modules for the NPC topology instead of three.

Solar energy growth is fueled by cost reduction. Increasing the voltage levels from 1000V to 1500V overcomes the high cost of energy generation. On the other hand, this voltage change has implications and challenges on the inverter modules and topologies that are required to build solar plants.

Semikron, a leader in power modules, offers various solutions to the PV market. Its portfolio covers the demands and the challenges of the 1500V solar inverters with innovative packaging technologies and module solutions. Semikron’s complete portfolio provides coverage from string inverters up to central inverters for installations in the MW range. Further, efficiency, power density, reliability and scalability demands are addressed with various platforms. Hence, customer cost-performance ratios and specific needs are met effectively.

Kevork Hadda works as the Product Development Manager of SEMIKRON Elektronik GmbH & Co. KG, an Electronics company in Nuremberg, Germany. He is responsible for the Project Management Group, Engineering Group, as well as R&D and Application activities. He earned his Bachelor's Degree in Electrical Engineering with specialization in Power Electronics at Saint Joseph University (ESIB)-Beirut, Lebanon. He then acquired his Master's degree in Applied Science - Electrical Engineering specialized in Power Electronics at Concordia University, Montreal, Quebec, Canada.

Bernhard Eichler is the Product Marketing Manager of SEMIKRON Elektronik GmbH & Co. KG, Nuremberg, Germany. He owns a diploma in electrical engineering and an M.B.A. He worked as an R&D engineer and Product Manager for renewable energy converters at Siemens before he joined SEMIKRON in 2016. At SEMIKRON Bernhard is responsible for the international product marketing activities for the markets solar, wind energy and traction.