Basically the most important components that provide electrical isolation that allows integration of different subsystems by breaking direct conduction paths are called the isolators or couplers. Integrated circuits (IC) can be combined into the isolators for various electrical functions like driving power electronic devices, high accuracy current and voltage measurements, analog and digital communications and logic interfaces, and isolated power supply conversions. 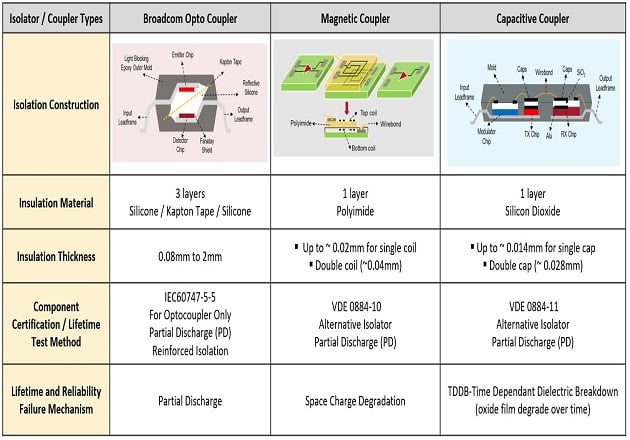 Theoretical dielectric strength values of insulation materials would always apply if optocoupler manufacturers could produce consistently pure insulation barriers. Often, however, high voltage dielectrics contain defects like voids and inclusions of air or other impurities. These voids will have lower breakdown strength than the surrounding dielectric and will discharge or arc when their breakdown strength is reached. The discharge, however, is limited to the length of the void, and after discharging, will slowly recharge with the limited current available through the good dielectric.

The void eventually recharges to the breakdown voltage and discharges again, as the process continues as long as the applied electric field remains high enough. These discharges are considered “partial” because they occur across the void in a limited portion of the length of the dielectric barrier. Partial discharges, which cannot be detected by leakage current measurements, can over time spread in the insulation that eventually leads to complete insulation breakdown. The problem then is to detect the presence of partial discharge during a manufacturing test in order to prevent this phenomenon from degrading devices in the field.

The broadcom optocoupler's high voltage insulation strength is further enhanced with three key design methods. The first is by inserting a clear polyimide called Kapton tape in between the LED and photodiode. The second method is the use of a proprietary, low-cost Faraday shield which decouples the optocoupler input side from the output side. Figure 1 illustrates the isolation construction of Broadcom optocouplers. The third method is by unique package design which is optimized to minimize input-to-output capacitance, Ci-o. The importance of the three design methods will be discussed in detail in this technical paper with an accompanying high voltage surge test as proof. 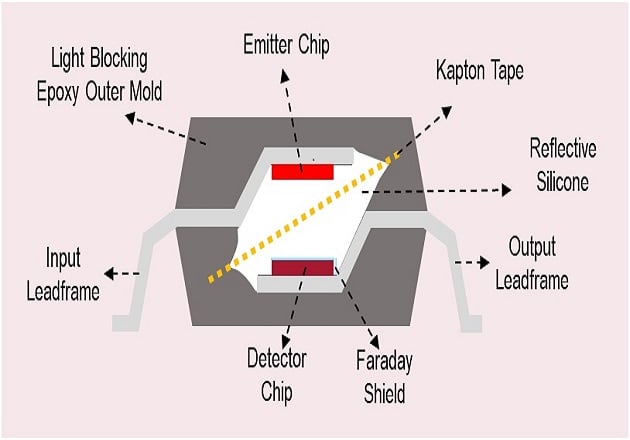 Magnetic coupler uses two coils that are stacked on top of each other with a separating polyimide material of about 0.02mm in between. The application of an AC signal creates a magnetic field, which in turn induces an electric field in the secondary coil. Since the transmission is by magnetic field coupling, the magnetic coupler is also susceptible to nearby magnetic interference. 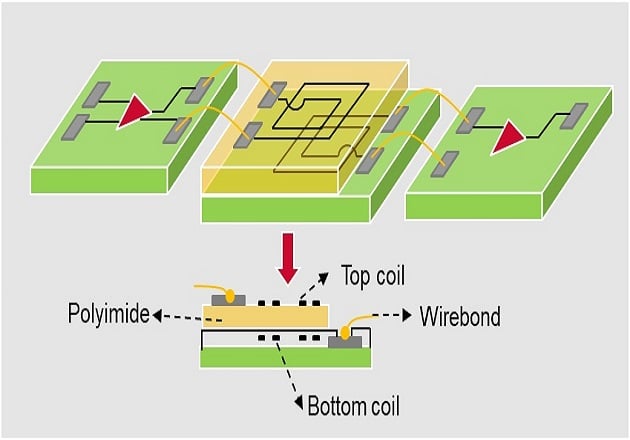 Figure 2: Magnetic coupler isolation construction with a single pair of top and bottom coils with polyimide insulation material in between.

The construction of a capacitive coupler, as the name implies, is quite similar to a ceramic capacitor, whereby silicon dioxide (SiO2) dielectric of a thickness of about 0.015mm is sandwiched in between two metal plates, usually aluminum (Al), in close proximity. The SiO2 crystal is grown on top of the Al plate. Transmission of signal through the capacitive isolation barrier is usually AC electrical signal. 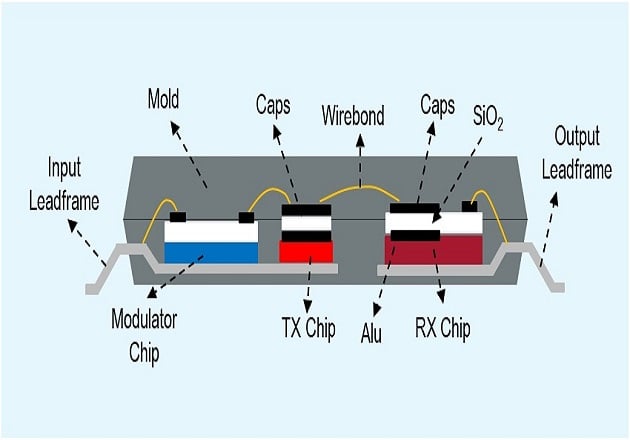 Optocouplers are certified to components safety certification of IEC 60747-5-5 for reinforced isolation. This international certification recognizes partial discharge as the failure mechanism for insulation material breakdown. As such, the certification only applies to optocouplers. The alternative isolation technologies like the magnetic and capacitive are certified German standard VDE 0884-10/11. Though the insulation material strength is determined by a partial discharge test, this may not be suitable to predict the lifetime reliability of the magnetic (space charge degradation) and capacitive couplers (TDDB).

A quick bench test setup can be easily assembled to compare the insulation strength of various isolators. Figure 4 below shows the test setup where the high voltage surge is applied using an ESD gun. The voltage profile of the ESD gun has a very fast rise time of about 1ns and a slow fall time of 30ms. This surge profile is different from the IEC 60060-1 standard surge profile of 1.2µs / 50µs, but it is sufficient for the purpose of comparisons of high voltage strength of different isolation technologies. 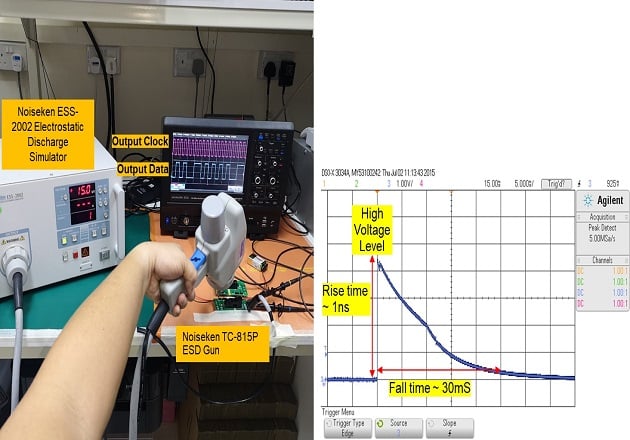 Three random samples each from two optocoupler manufacturers, Broadcom and Isolator A, one magnetic coupler (Isolator B) and one capacitive coupler (Isolator C) were selected for this high voltage surge test. These isolators are high precision current sensing sigma-delta modulators with an internal clock generator built into an 8-pin stretched surface mount package outline (SSO8).

The isolation withstands voltage, Viso of this type of SSO8 package is rated 5kVrms per minute and with creepage and clearance distance of minimum 8mm. Figure 5 below shows the schematic diagram of the PCB used to hold the device under test (DUT). 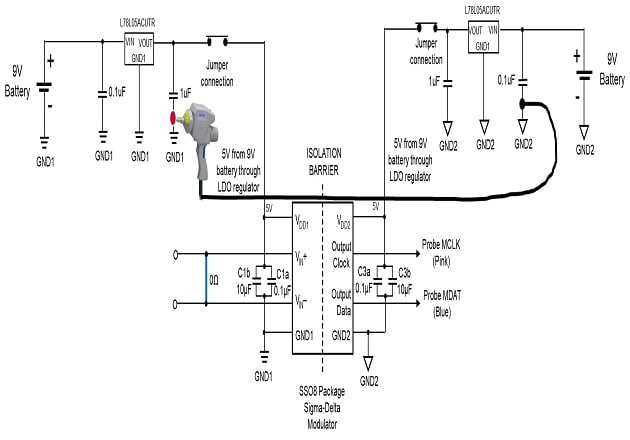 Both isolated side power supplies were provided from 9V batteries separately and regulated down to 5V through an LDO voltage regulator on each side of the isolation. The test was carried out by applying a high voltage level starting from 14kV between Gnd1-Gnd2 of the sigma-delta modulators.

The high voltage surge will induce high-density displacement current from Gnd1 to the input circuitry of the isolator and then transmit over to output circuitry and Gnd2 via capacitive structures or parasitic capacitance formed throughout the isolation barrier. Figure 6 below shows the various parasitic capacitance paths formed between the wire bonds of the input circuitry/input leadframe to the Faraday shield of Broadcom optocoupler.

In addition to the Faraday shield, Broadcom optocoupler leadframe and package design is optimized for smaller combined input to output capacitance, Ci-o. Table 2 shows the comparisons of Ci-o of various isolators. Displacement current follows the relation of i=c*dv/dt. With a smaller Ci-o, smaller displacement current is induced during the occurrence of a high voltage surge.

Table 3 shows the results of high voltage surge test on the isolators with different technologies. As evident from the test, Broadcom optocouplers are the most robust against high voltage surge whereby no failure is observed for all the units under test up to 25kV test limit. Isolator A (optocoupler) outputs permanently latched starting from 16kV upwards, while Isolator B (magnetic coupler) from 14kV upwards and Isolator C (capacitive coupler) from 15kV upwards respectively. Although Isolator A, B and C started to fail at about the same level, Isolator C recorded the widest range of the high voltage surge levels at which the test units failed.

Lim Shiun Pin is a Technical Marketing Engineer with the Isolation Products Division (IPD) at Broadcom Inc. He joined IPD marketing team since 2011 and has been instrumental in the area of application development of high precision isolated sigma-delta modulator and optocoupler SPICE modeling. Before that he was doing product development for RF SAW and BAW filters. He has an MSc degree in RF and Microwave Engineering from Nanyang Technological University of Singapore.