This article discusses GvA Power Supply System and some insights to its features and advantages.

Power semiconductors with high reverse voltages and extensive current carrying capacity are indispensable for expanding an intelligent, locally supplied energy network. However, to operate these components reliably – be it for control, monitoring or communication purposes – external auxiliary voltage that is isolated from earth potential is always required, which places enormous demands on the insulation. The new “GvA Power Supply System” features high insulation voltage and partial discharge resistance, combined with remarkable performance and efficiency.

The dramatic pace of change in electrical energy networks due to the use of generators that are increasingly decentralized is making it even more challenging for network operators to guarantee network stability. The elimination of large synchronous generators that allowed the networks’ protective devices to work flawlessly by providing reactive power and ensuring the required short-circuit current has sparked intensive work on alternatives. The combination of large and small energy storage systems in the future means it is essential to adapt to the prevailing network conditions very quickly in order to guarantee instantaneous primary and secondary control power.

The required high-blocking power semiconductors such as IGBTs, IGCTs, and thyristors with blocking voltages greater than 7000V are already available on the market and are used in compensation systems, network interconnections, and filters. But all of these semiconductor switches have one thing in common: to work, they need additional auxiliary voltage, using which the component in question can be controlled, monitored and protected. These essential auxiliary voltages are at a high level relative to the earth potential and so must have appropriate insulation. Not only the actual insulation strength is significant here, but also the freedom from partial discharges. GvA is launching an extremely compact, high-performance DC-DC converter that is designed perfectly for jobs like these.

The GPSS has been developed specifically to provide auxiliary voltages and provides two electrically isolated output voltages. Its extremely compact design and high power rating of at least 150W per channel set it apart. Each channel is controlled individually and has an inrush current limiter to limit the output current for loads with a high capacitive input, and a short-circuit current limiter and shutdown facility. If there is a constant overload, the intelligent control ensures the channel affected is shut down and reactivated again automatically once the fault has been cleared.

Standout features of the GPSS include: Figure 1. Due to its high insulation voltage, the GvA Power Supply System is ideal for medium-voltage applications.

The converter topology consists of a full-bridge series resonant converter on the primary side and a synchronous rectifier in a B2 circuit on the secondary side. This circuit configuration enables an efficiency of up to 94% and therefore helps ensure that the device’s inherent heating is very low and that minimal external cooling is required.

The typical supply voltage is 24 VDC, with the full available capacity lying in the range from 21.6 VDC to 25.2 VDC. As the two output channels are controlled separately from each other, unbalanced loads are also possible, and the outputs can be connected in series.

The base plate of the GPSS is used both as a mounting plate and as a cooling plate for the primary switching step. The low thermal power loss of both primary full bridges dissipates externally via the base plate, meaning there must be sufficient heat removal. Figure 2. The new GPSS is the perfect insulating supply unit for IGCT and IGBT stacks.

Every GPSS monitors its key operating parameters and indicates the status via a fiber optic transmitter on the primary side of the device. The status of the outputs (overload or short circuit) signals after a defined delay, and inadmissible input voltage ranges or excessive temperatures in the primary switching step are indicated. Figure 3. Due to its modular design, the GPSS can also be operated in parallel, multiplying the number of output channels.

If an application requires more than two auxiliary voltages, the GPSS modules can be connected in parallel on the primary side in any configuration thanks to their flexible design. In this regard, it is possible to monitor all GPSS by means of a single light guide, greatly simplifying monitoring management. Coding takes place via the input plug and is designed to be fail-safe; consequently, an open circuit is also recognized as a fault.

In principle, the power supply on the primary side of the GPSS modules can be looped through from module to module. In this case, only the max current load of the input jack and connector strip needs to be observed.

The Housing and its Insulation

To allow these parameters to be guaranteed over a long operating period, high priority was given to the electrical stability and the behavior under environmental influences when choosing the material for the housing. The material used has been tried and tested for years and is also used to produce medium- and high-voltage insulators. It can be shaped easily by appropriate means and can be processed without air or gas being trapped. It is immune to aggressive environmental influences and does not change its characteristics, even during long periods of extreme electrical load. The specially developed geometry of the inner isolation barrier ensures the electrical field is distributed uniformly between the primary and secondary sides. This optimized field control prevents excessively high local field strengths, preventing associated inner partial discharges in the electronic module on the secondary side. 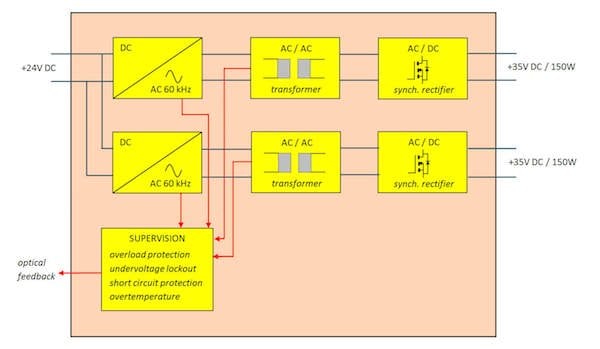 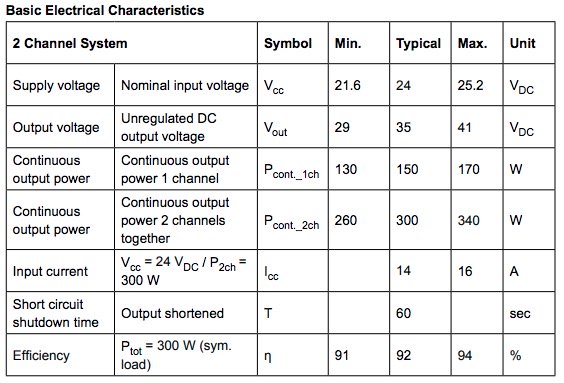 The external insulation is primarily ensured by the high tracking resistance – the housing material used has a CTI > 600 – and the large creepage and clearance distances of 210 mm and 180 mm respectively between the output and input.

The consistent demand for minimal losses and the lowest possible inherent heating requires a resonant converter topology with zero-voltage switching or zero-current switching behavior. A series resonant circuit is used in the GPSS for operating reliability reasons because of its good control characteristics, particularly in the event of an overload or short circuit. A pot core is used for the transformer, and the insulating material is located between its two halves. Due to the large air gap that results from this, the magnetic coupling of the two pot core halves is reduced and the leakage inductance increases. Nevertheless, appropriate circuitry measures optimize the transformer’s efficiency, while simultaneously reducing the system-induced natural resonant frequency. This has a two-fold positive effect on the overall efficiency. Firstly, the transformer’s magnetization loss is reduced, and secondly, the lower switching frequency relieves the load on the output stage and less energy is required for driving the MOSFET.

The series resonant circuit topology enables relatively simple controlling and also offers excellent operating reliability, even in the event of an overload or short circuit, because it is inherent in the system itself.

The alternating voltage transmitted to the secondary side of the transformer is converted to DC voltage using an adaptive synchronous rectifier and offers minimal semiconductor losses in any operating state.

In a nutshell, the GPSS offers a simple, reliable power supply for active components and modules in cases where customary DC-DC converters cannot be used due to their limited insulation properties. These components not only include power semiconductors such as IGCTs and IGBTs in medium-voltage converters, but also general protection, monitoring or control modules that have a high potential relative to earth and require an electrically isolated power supply.

Thomas Schneider is a graduate engineer and currently works at GvA Leistungselektronik.