This article introduces Mitsubishi Electric's NX-Series 7-in-1 IGBT Modules and its benefits in terms of footprint and scalability.

Different motor control inverters require different IGBT power module package sizes. Conventionally, for smaller inverter power ratings, the 6in1 IGBT power modules are used. For higher ratings, inverters are conventionally built by using three half-bridge power modules. As a result the inverter construction is different for different power ratings, thus the driver boards, bus bars and heatsinks cannot be reused for achieving higher power ratings. This necessitates higher development expenditure alongside the requirement for complicated logistics for the sourcing of new and unique components. In several motor drive applications, reactive power required for the motor operation has to be considered and an additional brake unit has to be incorporated. To address the requirements of scalability and reducing the number of components, the NX-series 7in1 IGBT packages have been developed. The NX-series 7in1 packages include a three-phase inverter bridge plus an additional brake chopper IGBT with a current rating between 75A and 300A in the 1200V class.

The NX-series 7in1 IGBT modules contain a three-phase inverter bridge and a brake chopper as shown in the internal circuit diagram in Figure 1. A thermistor is implemented to monitor the baseplate temperature. 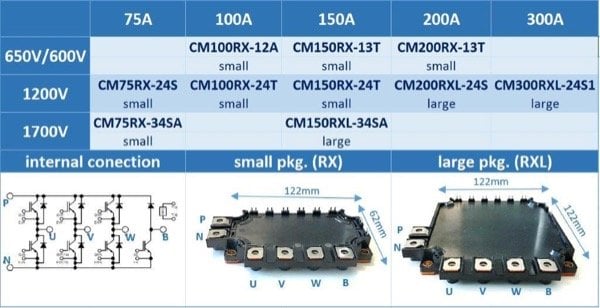 Figure 1: Line-up and circuit diagram of NX-series 7in1 IGBT Modules

Two different packages were developed in order to cover the whole line-up from 75A to 300A. An inverter with the high power density can be achieved by implementing these current ratings into the 122x62mm² footprint (small pkg.) and the 122x122mm² footprint (large pkg). The 17mm module height is already compatible to other existing standard IGBT power module housings and therefore various compatible rectifier modules from different manufacturers are available. To provide full scalability for small and large packages, the same arrangement of power and control terminals are designed.

This offers the possibility of using the same components like driver boards and bus bars for different power ratings. This approach - multiple utilization of components is a key factor in minimizing the development effort, time and costs. The separation and the orthogonal arrangements of the dc-terminals (P/N) and the ac-output allows for a simplified inverter construction. In cases where the brake chopper is not required, the unused IGBT can be turned OFF by short-circuiting the gate and emitter pins. Therefore, depending on the requirement, the 7in1 module can also be easily utilized as a three-phase inverter without the brake chopper. 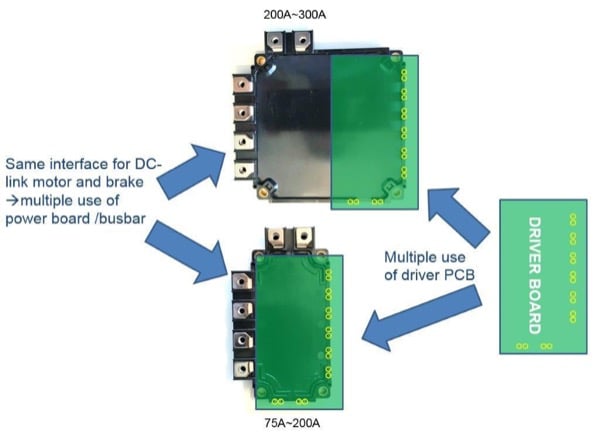 Conventionally, the 6in1 IGBT modules are available in a package with 122x62mm² footprint with a current rating up to 200A. Usually pin terminals are used which limit the current capability of the contacts. An additional limitation is the high heat concentration in air-cooled heat sinks due to the small package footprint. Due to this reason, the inverter power rating based on 6in1 modules is limited to about 55kW. Inverters for power ratings above 55kW conventionally employ three half-bridge modules with an additional optional brake chopper module. This change from a compact 6in1 IGBT module to three half-bridge modules translates into a heatsink size increase of about 210%, greater complexity in design and an expensive inverter construction. In place of just 1 power module, four power modules have to be assembled.

The compact NX-series 7in1 package offers a power range comparable to the conventional 6in1 module. The large package version of the NX-series 7in1 module allows for an extension of up to 90kW in the inverter power range. Therefore the large package version of the 7in1 modules offer an intermediate solution between the compact 6in1 / 7in1 modules and the high power half-bridge modules. The high power density of the large 7in1 package is achieved by using low loss CSTBTTM IGBT chips combined with a thermally optimized package structure and additionally utilizing the maximum allowed junction temperature of 175°C. A thermal simulation by using Mitsubishi’s Melcosim software ([3] publically accessible Ver. 5.3) has been performed and the result is shown in Figure 3. 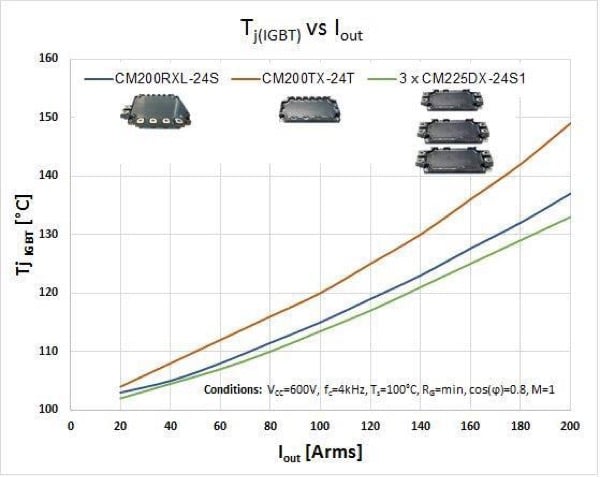 This simulation considers typical conditions for motor control applications with a switching frequency of 4 kHz. The heatsink temperature is considered as 100°C which is typical for air-cooled applications. As demonstrated, one 200A / 1200V 7in1 module (CM200RXL-24S in the large package) has performance comparable to three 2in1 modules with 225A /1200V rating (CM225DX-24S1). This alternative 7in1 solution instead of three, (or with brake chopper - four) 2in1 modules reduces the size by about 50% as shown in Figure 4. 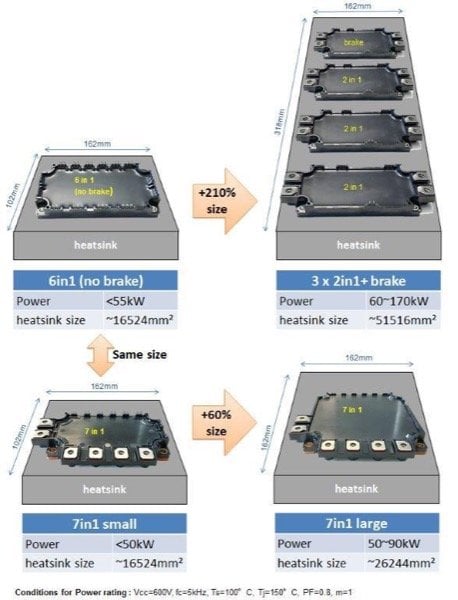 The 300A / 1200V 7in1 (CM300RXL-24S1) module is able to deliver an even higher performance. The 6in1 module, with 200A rated current, has thermal limitations and cannot provide the inverter output power equal to an inverter employing the 7in1 or the 2in1 modules as shown in Figure 3. Additionally, an air-cooled heat sink design which maintains the sink temperature (Ts) below 100°C will be quite difficult to achieve using the 6in1 module (considering the relatively small footprint of 122x62mm²). Considering an optimistic assessment where a heat sink temperature of 100°C can be maintained, the maximum output current of the 6in1 200A module is limited to 120Arms at an IGBT junction temperature of about 125°C.

Considering the same condition (125°C junction temperature), the 7in1 200A/1200V module is able to deliver an output current of about 150Arms. The heat sink design for the baseplate of the 7in1 will be much simpler since the base plate area of the 7in1 module is two times greater than that of the 6in1 module. Therefore it is reasonable to consider operating the heat sink at 100°C while utilizing the large 7in1 module.

The NX-series 7in1 IGBT modules provide an optimized package for the requirements of motor control inverters. Taking advantage of this demonstrated scalability offered by the large and small packages, the same inverter construction concept can be utilized for developing an extended inverter series capable of delivering higher power levels. The efforts required for designing and implementing the extension of the inverter power range compared to the conventional approach (using 6in1 modules) is greatly reduced because components like bus bars and driver boards can be reused. The low loss CSTBTTM chips in combination with the superior thermal performance offered by the thermally optimized package structure in the large package delivers a high power density. Therefore the 7in1 modules offer an optimized solution to design a scalable cost-effective motor drive inverter.