Innovation Strategies for Capacitors from the Made in China 2025 Initiative

Innovation Strategies for Capacitors from the Made in China 2025 Initiative

China is constantly developing towards technology leadership. The field of electronics is by far the largest and includes, among other things, the electronic components. China’s exports have risen by a factor of 16 since 2000 [1]. The Chinese government’s master plan in May 2015 for the further modernization of the industry gives further impetus to the country’s innovative strength. The “Made in China 2025” strategy is the first of three steps on the way from the extended workbench to a world-leading industrialized nation in 2049 [2].

Nine sectors of action should be given priority in order to achieve more innovation, quality, and efficiency in ten key areas. Each of these areas (e.g., artificial intelligence, robotics, aerospace, medical, express, hybrid, and electric vehicles, [3]) require electronic components, in particular, capacitors. Reason enough to take a closer look at existing and future innovations in capacitors for electronics.

Energy storage is an integral part of our modern world. Be it in a smartphone, in a cordless screwdriver or in a car: many electrical devices have their own, built-in energy storage. However, capacitors are not necessarily the first technology you think of when it comes to storing large amounts of energy. 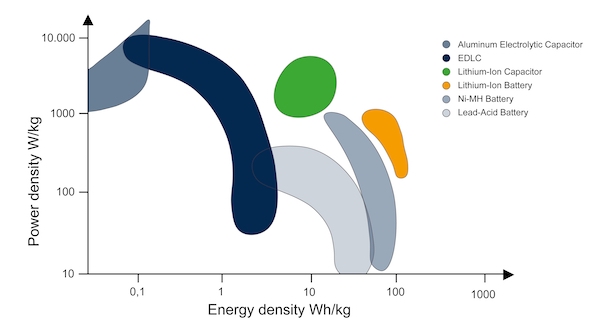 Depending on the application, selecting from the available storage technologies may offer a suitable solution. In the following, we will focus in particular on Jianghai aluminum electrolytic capacitors, electric double-layer capacitor and lithium-ion capacitors.

With its vertical integration strategy, Jianghai has its own facilities for etching and forming the anode material and can therefore optimize the properties of the films. Improvements to the etching process result in more uniform pores (b), making better use of the available volume. This allows high specific capacitance values and thus more compact capacitors.

An electrochemical process creates the dielectric layer on the surface of the roughened anode foil. The quality of this “formation” or structure and layer thickness of the dielectric are key to high reliability and electrical performance of the electrolytic capacitors in operation. 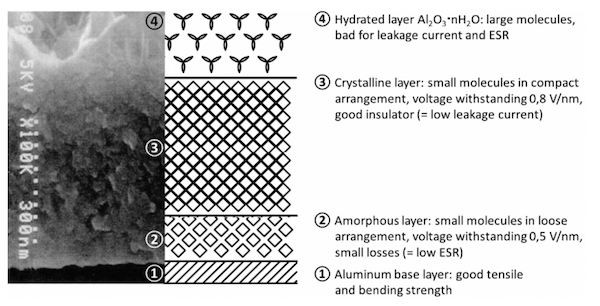 Figure 3 shows the layer structure of the dielectric in cross section. The aluminum foil ① is first followed by a layer of amorphous aluminum oxide ②, followed by a crystalline ③ and finally a hydrated layer ④. One goal in the development of new anode films is a thinner hydrate layer with a thicker amorphous layer. As a result, Jianghai’s novel anode films have higher current carrying capacities and lower ESR values, which qualifies them as “work-horses” for power electronics applications.

Energy Capacitors for the Future

Ever since the 1950s, larger amounts of energy have been stored in double-layer capacitors (EDLC). Today, double-layer capacitors are known as super caps, ultra caps, gold caps, and many more commercial designations. Developed further, they reach capacitance values of several hundred farads and offer very high power densities (Figure 1). However, high power densities alone cannot compete against the batteries and accumulators, which have also been further developed. 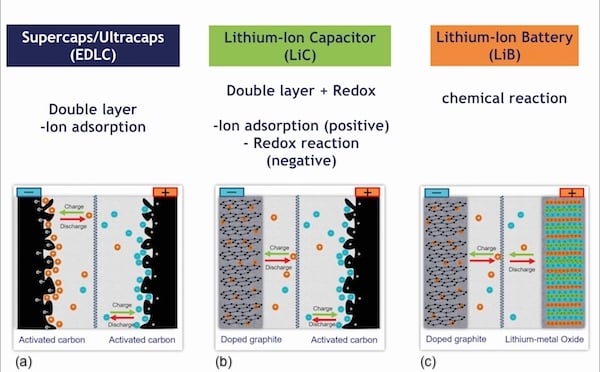 Figure 4: Electrode structure of the three technologies EDLC (a), LiC (b) and LiB (c)

The second technology with a modified design allows for significantly increased energy density. A lithium-doped graphite electrode replaces one of the two symmetrical electrodes. The asymmetric construction of this lithium-ion capacitor (LiC) allows much higher energy densities but has lower power densities compared to EDLC. Both constructions have their particular strengths which recommend them for different applications.

In terms of energy and power density, the lithium-ion capacitor (LiC) is found in between the double-layer capacitor (EDLC) and the Li-ion battery (LiB) (Figure 1).

Figure 4(b) shows that the LiC has an EDLC electrode (activated carbon) and a LiB electrode (doped graphite). As a result, the lithium-ion capacitor approaches the energy density of batteries. Yet, the advantage of fast charging and discharging is maintained. This allows for many charging cycles in the minute range. For even faster charge and discharge cycles, however, the EDLC is still the better choice.

In addition to the charging times, there are other arguments for the use of Energy-Cs, which impress compared to traditional batteries:

In terms of cycle stability and lifetime, the Energy-Cs are far ahead of the batteries. While lithium ion batteries offer merely about a thousand cycles, LiC reach several tens of thousands of cycles and double layer capacitors boast with cycle values of many hundred thousand cycles.

Design and Combination of LiC

The special design and material combination of the lithium-ion capacitor ensure stability and charge retention even at high temperatures. If both accumulators and LiC remain stable at room temperature and discharge less than 5% over 2500 h, an EDLC already loses 30% of the charge after 2000 h.

At 60°C, the discharge rate increases significantly due to the accelerated chemical reactions between electrolyte and electrode material. The consequence of these chemical reactions is an increased leakage current and this leads to charge loss in batteries and EDLCs alike. While the leakage currents of the LiC continue to be low, the lithium-ion battery now loses up to 30% of its charge after 2500 hours. For EDLCs, this happens after 500 hours. In energy harvesting applications, the LiC offers significant advantages.

Safety and Reliability of LiC

When it comes to safety and reliability, the LiC can also score. It is just as safe as an EDLC, due to the special process that firmly embeds the lithium ions in the molecular structure of the carbon structure (“doping”). Unlike lithium batteries, no elaborate designs are needed to reduce the risk of thermal runaway with the known fire hazard. Due to the doping, there are neither metallic lithium nor lithium oxide in the capacitor. The doping method thus allows the capacitor to always be in a safe condition even with mechanical damage, high temperature, or heavy discharge.

The production of a LiC requires less than 3% of the lithium amount of a LiB of the same volume. In addition to the aspect of efficient use of resources, this results in a lower weight / smaller design as a nice side effect.

Overall, LiC technology offers many benefits as part of Jianghai’s Energy-C concept. But there is more potential in this technology. In the future, energy densities of 50 Wh / kg and power densities of more than 30 kW / kg should be achieved. Jianghai drives the research for new electrode materials, which should further increase the conductivity. Optimized electrolytes also expand the temperature range of the component while increasing the temperature stability.

The Ragone diagram (Figure 1) shows that lithium-ion capacitors open up a new range for applications that previously were not covered, neither by batteries nor by any other capacitor. The Energy-C concept represents a new technology for existing and future applications of energy storage. The capacitors described here are already being mass produced by Jianghai and have proven their superior performance under real operating conditions in the field.

China is on its way to becoming a world-leading industrial nation. Innovation, quality and efficiency are becoming increasingly important. In the production of electronic components, the development and production of the pre-materials is complementing the value-added chain. As a result, commercial and technological aspects gain in importance.

Alexander Schedlock graduated from the College of Engineering “Hein-rich-Hertz-Berufskollege” in Dusseldorf as a state examined technician specializing in electrical engineering. After successfully completing his apprenticeship as an IT system electronics engineer (2010), he worked as a field service technician and was thus able to gain experience with computer terminals for various applications. In addition, he studied for four years at the technical school for electrical engineering and graduated in 2017 successfully from his state vocational school exam. Since 2018 he works in the sales team of Jianghai Europe Electronic Compo-nents GmbH as Technical Sales Manager and supports customers in technical designs throughout Europe. Mr. Schedlock is in charge of the Energy-Capacitors.

Dipl.-Ing. Ole Bjørn studied electrical engineering at the Technical University of Hannover. After completing his diploma thesis (1996) in the private sector and a time as a product manager in medical technology, he entered the technical sales department (1998) as Sales Engineer at Philips in the field of passive components. In subsequent years, his scientific profile was sharpened thanks to the close collaboration between customer developments and the production capabilities of the various plants, including the commercial responsibility under the legal successor BCcomponents, later Vishay. With the founding of Jianghai Europe Electronic Components in 2003, all experience in management, sales, marketing and technology was incorporated into the new company. In the position of Managing Director, Mr. Bjørn today coordinates the entire activities of the Jianghai Group in Europe

Dr. Arne Albertsen studied physics focusing on applied physics at the University of Kiel. He earned diploma (1992) and PhD (1994) degrees on the measurement and analysis of current-time-series of ion channels in biological membranes. In industry, he worked in various areas of environmental and process engineering plant construction. Since 2001, he is dedicated to the marketing and sales of passive and discrete active components for leading companies like Vishay and KOA. Since November 2008, he is responsible as Senior Sales Manager for several European key account customers of Jianghai Europe Electronic Components GmbH (Krefeld). The focus of Dr. Albertsen is the design-in and application support for capacitors in professional industrial applications. Since 2011, Dr. Albertsen volunteers as an expert for electrolytic capacitors and Deputy Chairman in the standardization body „K611“ of the DKE in DIN and VDE.