Power efficiency is a key enabler of a greener future. This is particularly true for the industrial sector, where the demand for electrical energy is enormous, meaning improved power efficiency can make a huge positive impact on the environment.

Hitachi ABB Power Grids developed a platform for Phase-Controlled Thyristors (PCT) and rectifier diodes using its latest chip manufacturing technologies that maximize performance, increase efficiency and enhance the price/performance ratio. This article provides an insight into the platform, describing the first two products – a PCT and a rectifier diode – both rated at 6500 V and supplied in the N-housing (100 mm pole piece diameter, 35 mm height). 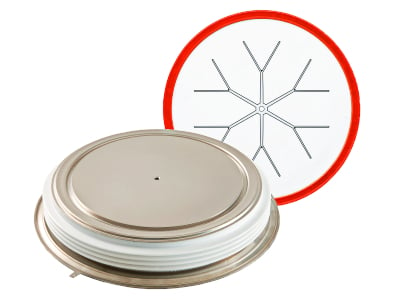 Introduction to the Thyristor

A PCT is a key component in high-power rectifiers, power supplies, motor drives, power quality systems, hydro pumping, HVDC and many more applications. It is the number one choice in applications where the highest performance, best reliability and the low conduction losses are required (see Figure 1). In some less sophisticated applications of high-power rectifiers or power supplies, the rectifier diode, providing minimal conduction losses, is also a desired solution in today’s industry.

Hitachi ABB Power Grids’ new platform for industrial thyristors and rectifier diodes boosts device performance significantly. The first products to use this new platform, a PCT and a rectifier diode, deliver a 30 percent performance increase compared to the previous generation [1] [2] [3] [4] [5]. This new platform makes use of the latest backend technologies and the leading snowflake gate design structure to create the PCT. The improved performance enables systems to become more cost efficient, a benefit that is achieved by allowing a reduction in the number of parallel connected devices in a high-power rectifier or increased output power of a static VAR compensator (SVC) or load commutated inverter (LCI). 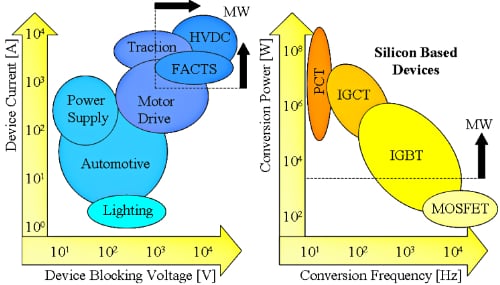 PCT and rectifier diodes for industrial application aim for maximized junction temperature, forward and surge current ratings. Although the outline of the new products is identical to the previous generation, internally the devices are drastically different. In order to optimize ratings, three major aspects of the devices were changed:

The diameter of the device was increased to the maximum with respect to the available space inside the N-housing. This resulted in a 15 percent increase in active area.

In addition to the introduction of the silicon-molybdenum bonding for PCTs and rectifier diodes, additional changes have been made to the packaging. As shown in Figure 2, the free-floating technology, used for the previous generation of PCT and rectifier diodes, is characterized by a symmetric packaging design. The dimensions of the adjacent molybdenum discs and copper pole pieces are identical for the anode and the cathode side. In contrast, the packaging of the bonded devices differs significantly. As mentioned above, the diameter of the anode pole piece has been increased to match the diameter of the chip, whereas the cathode pole piece was adapted to fit to the active area of the cathode side’s silicon chip. Due to the bonding on the anode side, the thickness of the cathode molybdenum was reduced and substituted by copper. This further improves the thermal and electrical resistances due to copper’s higher electrical and thermal conductivity. As a result of the asymmetry, however, the thermal resistances of the anode and the cathode are not equal. 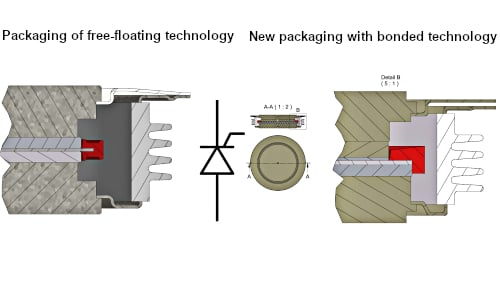 The trade-off between on-state voltage drop and reverse recovery charge of the new generation compared to the previous generation and selected competitors is shown in Figure 3. The PCT decreases static losses at constant switching losses by three percent. This leads to current density increasing to 62.3 A/cm² (+11 percent), together with the reduced thermal resistance and the increased junction temperature. A similar situation exists for the diode: the static losses are reduced by three percent and the current density is increased to 79.7 A/cm² (+ eight percent). Therefore, a significant improvement in rated forward current was achieved in comparison to the previous generation. 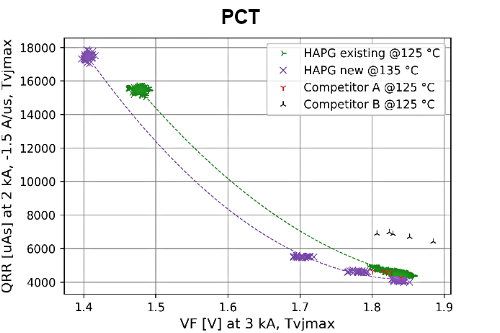 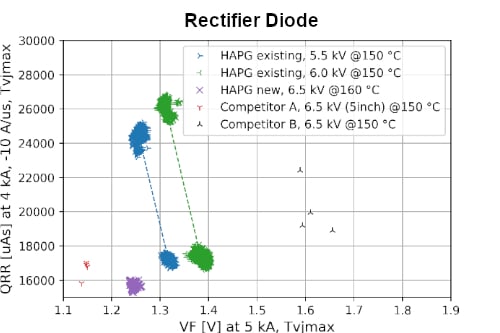 The bonding technology is one of the key factors that allow the device to withstand a higher junction temperature and avoid thermal runaway under blocking conditions. Furthermore, this technology enables significant enhanced performance at surge conditions. The surge current (PCT: I TSM, Rectifier Diode: IFSM) capability was thoroughly assessed during the product development. The main result in the case of the rectifier diode is illustrated in Figure 4, which shows the last peak value of the surge current measured during testing before the device was destroyed. The lowest last value measured during surge current testing of the new rectifier diode is approximately 145 kA in a 10 ms sinusoidal single pulse. This equals a surge current improvement compared to the previous generation of almost 60 percent. The fact that the surge current capability of the larger device from competitor A has been exceeded while being characterized by a lower on-state voltage drop, demonstrates that the enhanced surge current capability can be attributed to the silicon design and the bonding technology.

Drastic changes were made to the chip and packaging design of this new platform for PCT and rectifier diodes. Particular attention was paid to reliability to ensure the new devices fulfil all reliability requirements according to the relevant standards. This includes high temperature reverse bias (HTRB) testing (IEC60747-6), power cycling (IEC60747-6), storage at low (-40 °C) and high (PCT: 140 °C, Rectifier Diode: 150  °C) temperature (IEC60068-2), as well as thermal cycling between those two temperatures, shock and vibration testing (IEC61373) and more. Two examples demonstrating the robustness achieved are given in Figure 5. The on-state voltage during power cycling at DT=90K and the forward leakage current during HTRB at 135 °C are given for new PCT. Both the on-state voltage and the leakage current were stable throughout testing, and no major degradation or thermal runaway was observed.

Despite the massive changes in the packaging, the latest generation of thyristors and rectifier diodes offer reliability that is fully compliant with relevant standards, meeting Hitachi ABB Power Grids’ goal to produce the highest quality products.

This article presented the specifications for the first two products based on Hitachi ABB Power Grids’ new platform for high power PCT and rectifier diodes. A performance improvement of 30 percent was achieved while maintaining the device’s footprint, allowing the new generation of devices to compete with the next larger size and elevating power efficiency to a new level. By switching to the new generation applications will benefit massively, becoming more cost efficient and delivering higher power levels. 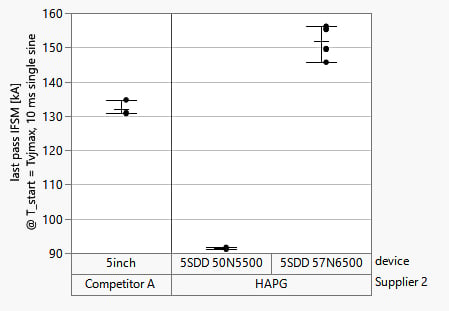 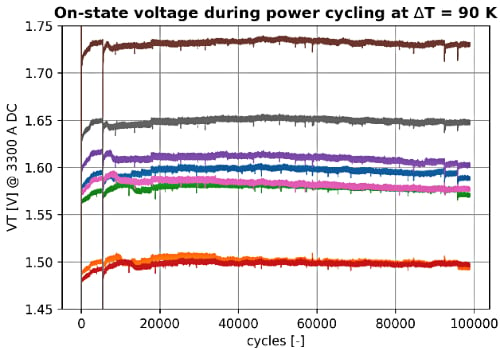 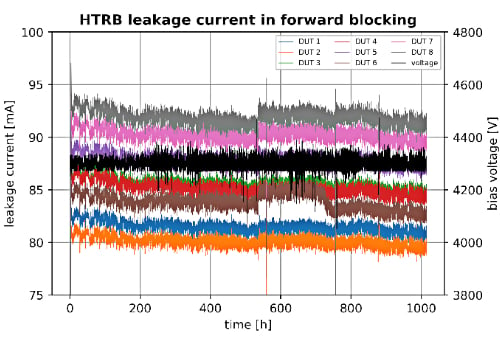