May 25, 2017 by Charalampos Papadopoulos

This article provides insight into the latest generation of 6.5kV HiPak modules with reliable performance demonstrated in the new THB-HVDC test.

High voltage IGBT modules are used in high power applications including traction (tramways/trains), heavy-duty drives, transmission and distribution and renewables such as in wind-power generation and conversion. Many of these applications are subject to harsh environmental conditions and in most cases, the inverter cabinets do not shield the power electronics, including the IGBT modules from such conditions.

As an example, IGBT modules can be for instance subject to increased humidity levels. Also, the inverter is not always running under full load conditions and can be in idle or running in partial load which means that the temperature can rise or drop relatively fast. Due to that, moisture can penetrate into the IGBT modules while the train is stopped for long periods of time and there are no higher temperature levels to drive out moisture from the modules.

Another aspect is that condensation can appear while having a temperature drop during operation, which can lead to drastic changes in the material properties (e.g. dielectric properties of chip passivation and module encapsulation materials such as Si-gel). These undesirable modifications can have a negative impact on the electric field at the periphery of the semiconductor device and therefore cause increased localized stress at the chip junction termination region. Therefore, it is crucial that the materials used for the IGBT module and the design of the power semiconductor including chip termination and passivation can cope with the increased stress levels, posed by the application during commissioning as well as for the foreseen lifetime up to 30 years.

Predicting the robustness of various power semiconductor designs for a planned lifetime of up to 30 years is very challenging, even more so since the conditions of the environmental impact are mostly not well understood.

In the past, the standard THB (temperature humidity biased) test with 85% r.h. and 85°C was used with a reverse bias of 80V, with a typical test time requirement of 1000 hours. This test promotes charge or ion movements due to increased moisture levels combined with relatively higher temperatures and voltages, which allows detection of instabilities caused by process variations or insufficient design margins. With such a standard test, decades of experience have been accumulated. However, for high power semiconductors, the 80V applied reverse bias remains at a much lower level from typical voltages used in real power electronics converters.

It was shown that by increasing the applied voltage to more realistic values [1], this will cause an acceleration of electrochemical mechanisms which could play a more dominant role when compared to the classical impact of charge or ion movement. The new condition can promote electrochemical corrosion, which causes several materials like aluminum, nitride and even oxides compositions to change the structure and lose their main protective functionalities. This electrochemical corrosion takes place normally when high moisture levels are present on the surface of the chip so that enough reactant moisture ions are available. This can only be triggered when both moisture and high voltage are present together. This also means that the well-known HTRB test under high temperature and high voltage, BUT without moisture, would also not serve this purpose. Therefore, a new test is required to fully quantify the device performance in such a harsh environment. We have come to learn that not only humidity and temperature accelerate the aging of power semiconductors. Voltage is also a significant acceleration factor and thus it is important that the voltage is reflecting the real application conditions. The most critical test to stress the chip termination and its passivation material is the THB test with an increased collector-emitter voltage also referred to as THBHVDC or H3TRB (i.e. High Voltage, High Humidity, High-Temperature reverse biased).

This test is being performed with the same standards applied in a THB test while increasing the collector-emitter voltage dependent on the device voltage class from 60% to 80%. This test can be performed in a standard controlled climatic environment well known from the past.

Power semiconductor manufacturers including ABB have learned in recent years that HV devices are vulnerable to environmental impact, especially humidity. Besides the material selection and the design, impurities such as particles and scratches can influence the electrical fields or promote corrosion, which can both result in accelerating component aging. Particles, for instance, could be generated in the whole process chain, starting from wafer sawing to wire-bonding, soldering, ultrasonic welding … etc. Furthermore, they can also be introduced due to wear and tear of automated handlers or carriers [2]. ABB has taken these aspects very seriously by the relentless elimination of particle sources through design and processes adaptations, optimized cleaning steps, a rigid automated optical inspection, and screening to root out possible defects or impurities early in the production chain.

As a result and since 2013, ABB gradually introduced an improved HiPak platform [3] which practically shows no field returns for several hundred thousand delivered modules. Furthermore, we have currently improved the passivation of HV IGBTs and Diodes even further and verified their high levels of robustness by using the new THB-HVDC test. The THB-HVDC test has been performed on the newest generation of 6.5kV IGBTs [4] and Diode chips assembled in the improved HiPak2 module of ABB. The conditions in the test were 85°C, 85% rel. humidity and 4.5kV (70%) collector-emitter voltage for 1000h while using the ramp up and ramp down within the typical THB specification. In order to increase the stress on the device, the ramp down of temperature and moisture in the chamber was kept short and performed within 3h. After the ramp down a final measurement of the blocking capability has been performed. By measuring the weight of the modules, it was proven that there is still a high amount of moisture present in the module.

In Figure 1, the monitoring of the THB-HVDC test is shown with the above mentioned applied voltage of 4.5kV on the left axis and the leakage current monitoring on the right axis. The curves need to be noise-free during the complete test time to ensure that any possible leakage variations are representing an actual change in the device behavior. 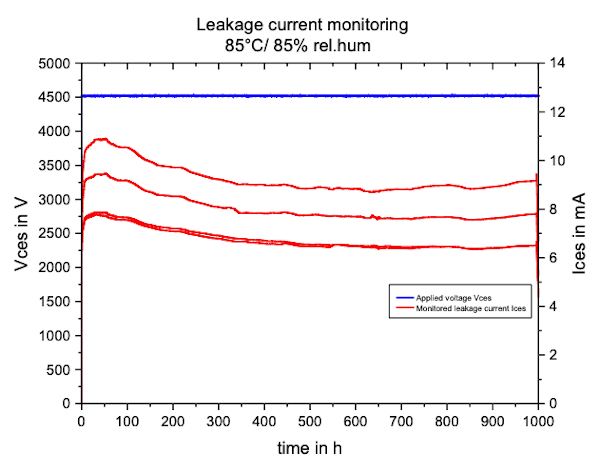 After the test, the reverse bias I-V characteristic is measured and compared to the initial measurement before the THB-HVDC test. A good design will demonstrate similar I-V characteristics before and after the THB-HVDC test as shown in Figure 2. However, a parallel shift, like a slight increase in leakage current is allowed due to different reasons like remaining moisture in the module, temperature, etc. 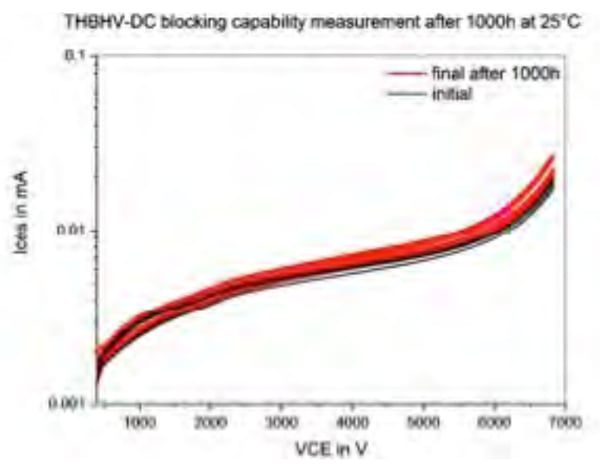 Figure 2: Reverse bias I-V characteristics of a 6.5kV HiPak 2 before and after THB-HVDC 1000 hours test

To finalize the analysis of the modules, a further criterion is to show that no significant corrosion is visible on the chips after the 1000h THB-HVDC as illustrated in Figure 3. Both IGBTs and Diodes were analysed after having disassembled the module and removed the gel with no corrosion or defects observed after this harsh test.

The THB-HVDC represents a much better application relevant reliability test than the commonly used standard THB test [5]. Nevertheless, for harsh environmental application conditions, especially in relation to absolute humidity levels, it is still difficult to properly translate the results of the THB-HVDC test to effective field reliability performance. For instance, it is yet undefined how much test time is required to reflect a 30 years life expectancy. At this stage, 500h can be sufficient, but as well it could be 1000h or even more. The newest power semiconductor developments and new technologies allow the devices to operate and sustain such harsh conditions which will help to improve for lifetime predictions.

ABB is a technology leader that is driving the digital transformation of industries. With a history of innovation spanning more than 130 years, ABB has four customer-focused, globally leading businesses: Electrification, Industrial Automation, Motion, and Robotics & Discrete Automation, supported by the ABB Ability™ digital platform.