This article discusses the challenges of SiC devices under high humidity conditions and introduces the new WAS300M12BM2 Wolfspeed power module.

Silicon carbide (SiC) power devices have arrived as a viable alternative to silicon (Si) in applications requiring efficient, high voltage, high-frequency power conversion. As expected from the superior materials characteristics, SiC devices have enabled high-performance systems that achieve the highest efficiency standards without any compromise of the reliability. Wolfspeed SiC diodes, for example, have been in the field for over a decade, accumulating more than 2 trillion device operational hours with less than one failure per billion hours in primarily industrial (indoor) applications. In recent years, outdoor applications such as renewable energy and transportation have emerged with a need for SiC devices to achieve system size, weight, efficiency, and cost targets. SiC devices have delivered on the price-performance expectation, but initial outdoor field deployments demonstrated some challenges which are shared by all semiconductor devices while operating under high humidity conditions.

The presence of moisture under bias has been a historical issue for all electronics.  Semiconductors such as conventional Si power devices introduce the added complexity of higher voltages present at the exposed chip surfaces as well as materials and active regions that are sensitive to humidity-induced degradation.  The ultimate failure mode is a loss of high voltage blocking capability with typical failure mechanisms associated with electrochemical migration, extended corrosion, and mobile ions [1].  These challenges in Si power devices are exacerbated with SiC due to the catalyzing effects of the order of magnitude larger electric fields, further exciting the aforementioned failure mechanisms ( Figure 1).  Wolfspeed engineers have invested considerable time and resources to develop the new W-series module products bearing process and design solutions that address all of these historically observed semiconductor failure mechanisms.

The standard JEDEC qualification test for industrial modules has been high humidity, high temperature reverse bias (H3TRB), also known as temperature and humidity bias (THB).  This test occurs in an environmental chamber set to 85% relative humidity and 85°C. The devices under test (DUTs) are placed in this chamber under 100V bias and stressed for 1000 hours.  Passing the test requires all DUTs to remain within datasheet specifications and minimal amount of parametric shift (20% for voltage measurements and 1000% for leakage measurements) [2].  The H3TRB test was found to be ineffective in predicting success for outdoor applications because devices were subject to voltages significantly higher than 100V.

A new humidity test was developed from the Si power device community—high voltage H3TRB (HV-H3TRB)—where the bias voltage was simply increased to reflect the maximum use condition of 80% rated blocking voltage.  Hence, this test is also known as THB-80.  For example, 1200V devices which were previously tested at a mere 100V would now be tested at 960V which is a typical use voltage in the higher voltage applications.  From the Si experience, devices successfully operating in the field under high humidity conditions have passed HV-H3TRB qualification at 1000h and ultimately fail above 2000h.  Wolfspeed’s WAS300M12BM2 (1200V, 300A half-bridge module in the 62mm package shown in Figure 2) is the first All-SiC module to achieve this new reliability benchmark. 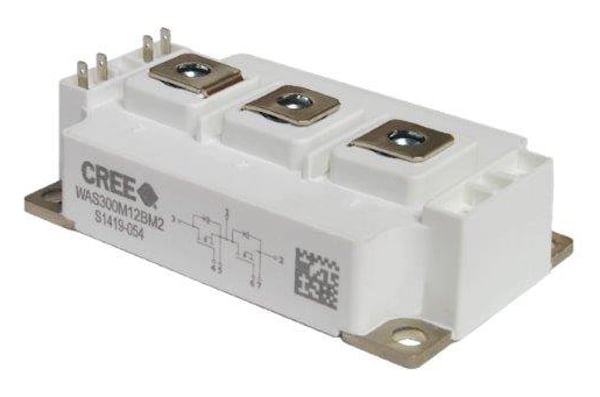 A random sampling of 6 WAS300M12BM2 modules were subjected to the HV-H3TRB test.  At the conclusion of each 500h iteration, all DUTs were removed from the chamber and tested for electrical stability and datasheet compliance. One module was sacrificed for visual inspection at 500h and at 1000h to make sure that there were not any lurking defects that could lead to early failure.

In addition to the normal monitoring to ensure HV-H3TRB conditions, each of the DUTs were individually monitored for leakage current (IDSS). Unstable IDSS waveforms have been known to be pre-cursors to catastrophic failures. As shown in Figure 3, all DUTs demonstrate stable IDSS waveforms throughout the 1000h of qualification. Electrical testing confirmed datasheet compliance with <5% voltage shift and <50% leakage shift, both well within allowable JEDEC shift criteria. Visual inspection of the sacrificed modules at 500h and 1000h show pristine die surfaces, comparable to un-stressed parts (Figure 4). High magnification microscopy confirms no evidence of the oxidation and electro-chemical migration failure modes. The four remaining un-opened modules continue to run under HV-H3TRB testing without failure after 2000+ hours. 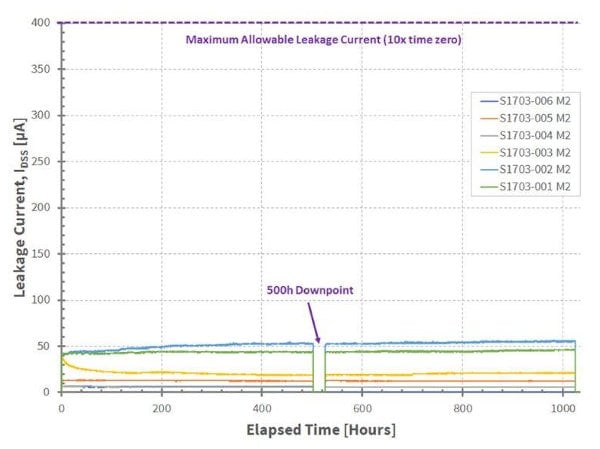 The new Wolfspeed WAS300M12BM2 power module demonstrates excellent performance under high humidity conditions. This is the first All-SiC power device to be qualified for harsh environment use by clearly demonstrating electrically stable, long-lifetime performance under HV-H3TRB without any lurking issues observed in the post-stress physical analysis. These results literally and figuratively open the door for using Wolfspeed’s W-series devices in key outdoor power conversion applications such as renewable energy and transportation where SiC performance is valued.

Guy Moxey works as the Senior Director of Power Product Marketing & Applications at Wolfspeed, A Cree Company, Durham, North Carolina. He earned his Bachelor of Engineering in Electrical and Electronics Engineering with Honors at the University of Brighton, Eastbourne, England. He then acquired his Master's of Science in Power Electronics at the University of Birmingham, Birmingham, United Kingdom.