Aluminum electrolytic capacitors ("alu-caps", "e-caps") are mission-critical components in many power electronic devices. The increasing demands for energy efficiency, the expanding use of renewable energy, and the growing share of electronics in the automotive industry have driven the widespread use of these components.

Aluminum electrolytic capacitors comprise a voltage range from a few volts up to approximately 700 V and offer a wide capacitance range from 1 µF up to about 1 F whilst having a compact construction at the same time. The surface of a highly roughened anode foil made from aluminum with a thin dielectric layer of aluminum oxide is fully contacted by a precise-fitting cathode, the electrolyte liquid (Figure 1).

An electrochemical process called "anodic oxidation" or "formation" produces the dielectric layer on the surface of the roughened anode foil. The quality of formation (i.e., the composition and thickness of the dielectric layer) is essential for the high reliability of electrolytic capacitors during operation. Figure 2 shows an electron micrograph of the surface of an etched high voltage anode foil. 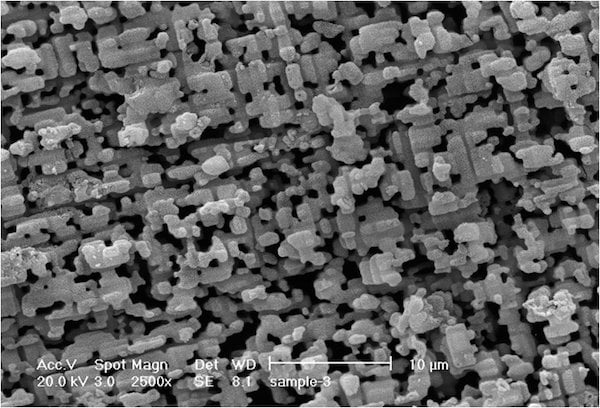 Figure 2. The surface of an etched anode foil.

Figure 3 shows the layer structure of the dielectric in cross section. On the aluminum foil ① is a layer of amorphous aluminum oxide ②, followed by crystalline ③, and finally a layer of hydrated oxide ④.

The compact molecules of the amorphous layer ② are only loosely bound, meaning they have little interaction with each other. This is useful when fluctuations of the electric field, induced by a ripple current, stimulate the molecules—less heat is dissipated compared to tightly coupled molecules. The "friction" between the molecules is low.

The large molecules of the hydrated layer ④ can be easily polarized and generate relatively high "friction losses". At higher temperatures, water molecules in the hydrated layer dissociate and weaken the crystalline layer ③, too, leading to an increase in leakage current.

Therefore, a goal for the development of new anode foils is reducing the thickness of the hydrated layer while simultaneously increasing the amorphous layer. Jianghai has its own factories for the formation of the anode material thanks to its strategy of vertical integration and can optimize the technology of the anode formation. 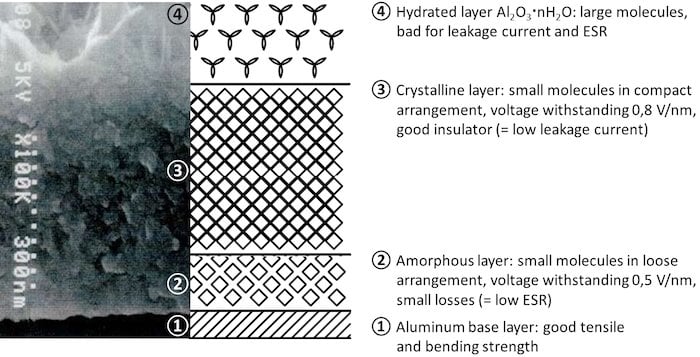 Defects in the dielectric of the anode are a major cause of the leakage current observed with electrolytic capacitors. Defects result from manufacture-related damages (cutting of the film, riveted connections of the tabs), crystal errors, the presence of foreign atoms in the aluminum base layer, mechanical stress (from winding), and partial dissolving of the oxide layer in the electrolyte.5

Figure 4. Electrolytic capacitor leakage current as a function of time (a), voltage (b), and temperature (c).

The dielectric absorption, bypass currents parallel to the capacitor cell, as well as tunnel effects6 make smaller contributions to the leakage current. Within a few minutes of connecting to voltage, the electrolytic capacitor leakage current decays almost exponentially and takes on an almost constant value, known as the operating leakage current (Figure 4 (a)).

The operating leakage current5 (as a measure of the forming condition of anode foil) depends on the time, applied voltage, temperature, and history of the capacitor (Figure 4 (a-c)). Typical values of the operational leakage current range between 5-15% of the data sheet value of leakage current amount and are usually reached after several minutes of continuous operation.

The leakage current specified in the data sheet shall be valid even after a long, voltage-free storage period, giving it a much higher numerical value than the operating leakage current. The oxide layer dissolves to a certain extent as a function of temperature and electrolyte composition, because without any voltage applied, the oxide layer cannot regenerate ("self-healing").5

Thus, devices kept for maintenance purposes should be operated from time to time. The periods of time for these brief regeneration operations depends on the type of electrolytic capacitors used but typically fall in the range of every several years.

When storing fresh, not yet assembled or soldered capacitors, Jianghai recommends not exceeding a period of 12 months after arrival to the end user prior to process and use. Longer storage times may negatively affect the solderability or cause increased leakage current during the first operation. Depending on the series and the environmental conditions during storage, longer storage periods may be agreed upon individually.

About 15-30 minutes of operation of the electrolytic capacitors via a resistor (low-voltage: 100 Ω, high-voltage: 1 kΩ, see DIN EN 60384-4:2017-04, section 4.1 "pretreatment"7) at a voltage increased gradually to rated voltage may heal the weak spots in the dielectric, lowering the leakage current below the datasheet value.

To ensure a uniform distribution of the voltage, the quiescent current IQ through the voltage divider resistors in Figure 5 should exceed the (operating) leakage current by several times. The use of electrolytic capacitors from the same production lot is beneficial because they generally have fewer deviations of leakage currents among them than products from different batches. 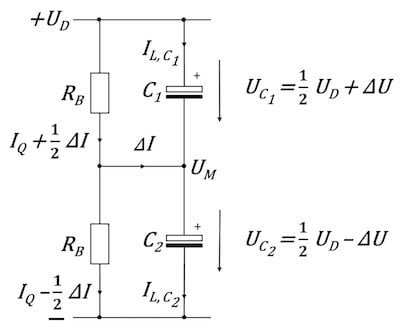 The midpoint voltage Um can be computed as:8

Equation 1 shows that the midpoint voltage Um differs from the desired ideal value of UD/ 2 by a value which is proportional to resistance RB and leakage current difference.

For the estimation of the balancing resistors RB, a good compromise between power losses and acceptable voltage difference needs to be found.

The leakage current difference of the electrolytic capacitors at upper category temperature can be estimated by Equation 2:8

Solving Equation 1 for RB and substituting the expression for IL,C2 - IL,C1 by Equation 2 yields:

The Many Options of Intermediate Circuit Topologies

For a parallel connection of several branches of electrolytic capacitors connected in series, another question arises for the topology of the balancing circuit: are all branches individually balanced (Figure 6a) or do the midpoints of all branches need to connect with central balancing applied (Figure 6b)? Or, if neither of those options works, does the balancing of capacitors need to be performed in groups (Figure 6c)?

Each of these topologies (a, b, and c) have specific advantages and disadvantages:8

Disadvantage: There is a higher wiring effort with more resistors and connections (and thus higher space and cost requirements).

Figure 6c shows a possible combination of individual (a) and centralized balancing (b). This topology combines the advantages and disadvantages of the individual variants.

In addition to passive balancing, the so-called active balancing is also found in large inverters. The active balancing circuit concept, which can, for example, be realized in cascode-voltage follower topology, offers some advantages:9

Due to their design, aluminum electrolytic capacitors have the peculiarity of requiring an operating leakage current to allow for the so-called "self-healing". The leakage current is closely related to the composition and the construction of the dielectric layer. A closer examination of the dielectric layer shows that it consists of various layers of aluminum oxide. By a suitable process control during the forming of the anode material, the properties of the dielectric can be optimized. In electrolytic capacitors for demanding applications, providers such as Jianghai, which rely on their own formation facilities for the anode foils, are offering technical advantages.

The applicability of the models and their results shown here depend on individual cases, the series, and the application. Therefore, close project monitoring and confirmation of assessments by the electrolytic capacitor manufacturer is always required.

Dr. Arne Albertsen studied physics focusing on applied physics at the University of Kiel. He earned diploma (1992) and PhD (1994) degrees on the measurement and analysis of current-time-series of ion channels in biological membranes. In industry, he worked in various areas of environmental and process engineering plant construction. Since 2001, he is dedicated to the marketing and sales of passive and discrete active components for leading companies like Vishay and KOA. Since November 2008, he is responsible as Senior Sales Manager for several European key account customers of Jianghai Europe Electronic Components GmbH (Krefeld). The focus of Dr Albertsen is the design-in and application support for capacitors in professional industrial applications. Since 2011, Dr Albertsen volunteers as an expert for electrolytic capacitors and Deputy Chairman in the standardization body „K611“ of the DKE in DIN and VDE.