This article introduces DuPont Teijin Films' Teonex, a new dielectric for DC-Link and snubber power capacitors and discusses its features and benefits.

Applications for power electronics require miniaturization more and more, reliability and efficiency improvements and therefore operation at increased power densities. As a consequence, high-temperature exigencies are set on the different elements of the power conversion inverter modules such as passive components, more precisely DC-link and snubber film capacitors. Si and SiC-based semiconductor switches operation temperatures are increased in the range of 175oC and above and film DC-link and snubber capacitors are required to function at temperatures above 105oC [1,2,3,4].

Common film dielectric used in power capacitors is based on the Polypropylene (BOPP Biaxial Oriented Polypropylene) technology. This dielectric material is known as a cheap and reliable reference solution for power capacitors as it operates at a high specific voltage in the range of 150 to 200 V/mm in the capacitors [5]. The drawback of BOPP film technology is the limited temperature range up to 115oC continuous operation [9], as a result of the polymer’s low melting temperature (at 165oC).

Polyester film technology, based on PET (Polyethylene Terephthalate) and PEN (Polyethylene Naphthalate), operates at 125oC resp. at 150oC but is limited to low specific operating voltage in the capacitors [5] and therefore has only limited access to power applications as the capacitors will not cope with the power electronics trend of miniaturization.

Other high-temperature film options, operating continuously above 125oC, such as PPS or PI, suffer from low voltage strength and poor self-healing capability which rules them out from power applications. Indeed the aromatic structures giving the high-temperature capabilities of the polymers are responsible for the limited intrinsic electrical strengths [6].

DuPont Teijin Films has overcome these physical limitations with the development of the film dielectric Teonex HV combining the high-temperature capability of a polyester PEN with excellent electrical breakdown strength performance.

Teonex HV is a high-temperature material with a melting temperature Tm at 265oC and a glass transition Tg at 145oC making a continuous operation in a temperature range up to 175oC possible.

The electrical breakdown strength of the Teonex HV film is comparable to BOPP and function of the film thickness:  a voltage strength on film sheet over 500 V/mm at room temperature is achieved as indicated in Figure 1. Electrical performance is improved relative to polyester films (PEN, PET) and far superior (2.0 x) than other high-temperature materials such as PPS, PEEK, and PI. 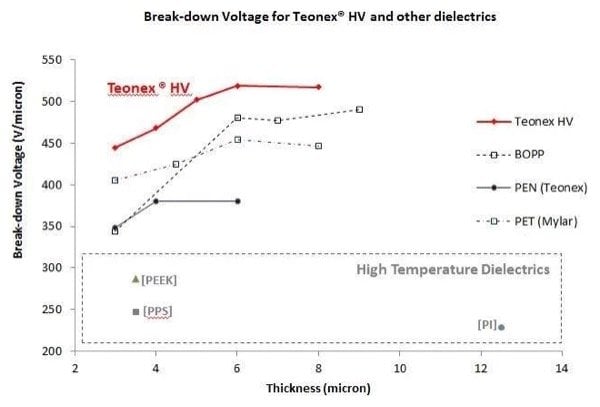 Figure 1: Electrical breakdown strength of Teonex  HV compared to BOPP and other dielectrics [13]. 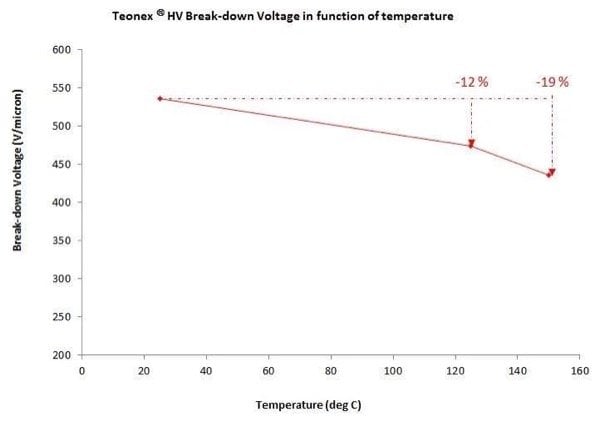 Figure 2: Electrical breakdown strength of Teonex  HV in function of temperature as per method [14]. 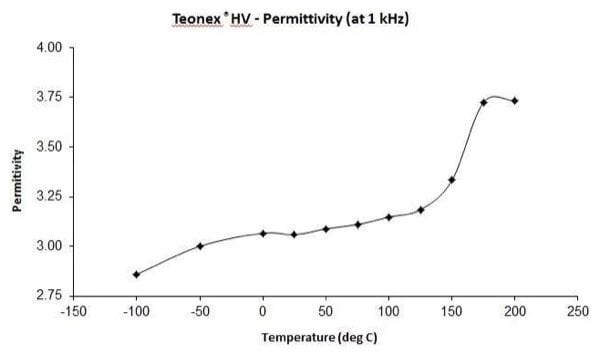 The Teonex HV film has an outstanding energy density, outcome of the material’s dielectric constant, and the high electrical voltage strength in the capacitor. Especially above 105oC operation, Teonex HV shows the highest energy storage density of all dielectric materials (Figure 4). 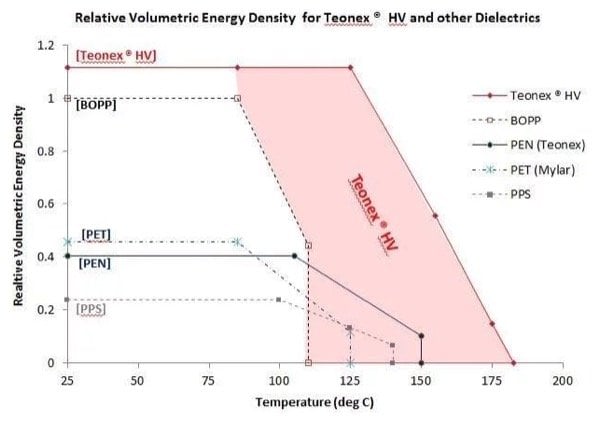 In power capacitors, the ability of dielectric to self-heal is of key importance for safe capacitor operation and end of life behavior of the passive component [8]. In case of an electrical breakdown related to a weakness in the metalized film, the discharge energy evaporates the polymer and metal electrode and creates a hole in the polymeric film surrounded by a de-metalized area and so the defect is insulated.

To assure the optimum self-healing capability, the dielectric must operate in a real condition below a certain interlayer pressure limit or with an equivalent minimum air layer. Above this threshold, the film loses its self-healing function: the dielectric is damaged and the clearing energies are too low to adequately evaporate the dielectric and the adjacent metal electrode and consequently result in the capacitor short circuit [7].

Manufacturing of Teonex HV capacitor requires soft winding and flattening process to reduce the processing interlayer pressures and to withstand the electrostatic pressure component resulting from operation at nominal voltage. Support by modeling, the impact of the winding and flattening conditioning on the capacitors electrical performance, is given on request for the Teonex ® HV dielectric film.

In the optimum scenario, the dielectric Teonex HV can operate at the specific voltage up to 150 V/mm at 125oC, pending on employed metallization and manufacturing technology; above this temperature a derating should be applied.

The film can be used with state-of-art, Zn or Al or Zn/Al metallization (as known from BOPP capacitor) in the wound or stacked power capacitor technology as well as in film foil or impregnated capacitor device.

The film is commercially available in 3,4,5,6 and 8 mm and so a large voltage range from 350 to 1000 V can be covered with single metallization pattern or above (> 1kV) with serial pattern metallization or serial/parallel capacitor design.

The power converter or inverter use in their intermediate circuit DC link capacitors for ripple filtration and electrical energy storage and delivery [5,8,11].

Inverters are used in automotives (EV/HEV/PHEV), renewable energies (solar and wind), industrial applications (drives and building facilities), traction as well as energy conversion (HVDC). Use of high-temperature capacitor in these inverters will improve their reliability, reduce their cost and size by cooling arrangement simplification and improve their maintenance [8, 9].

The introduction of high-frequency switching device such as GaN/SiC in inverter technologies will further reduce the size of DC link capacitors and consequently result in larger power densities and therefore temperature constraints on the passive components [12].

Today’s major dielectric film technology, based on Polypropylene and Polyesters can only insufficiently satisfy these needs: BOPP operates at high voltage strength and low temperatures while PET is only adequate for low voltage and medium temperature utilization.

DuPont Teijin Films is a joint venture established in 2000 between the US Company DuPont ™ and the Japanese company Teijin Limited to combine interests in the development, manufacture and sale of Polyester films with global operation. DTF is a world-leading producer of Polyethylene Terephthalate (PET) and Polyethylene Naphthalate (PEN) polyester films and supply a wide range of innovative and cost-effective products.  High-quality innovative polyester capacitor dielectric films are manufactured in DTF Luxembourg facility.