Catch up on all the parts in this series:

Part 5 showed how RF common mode noise gets into your design. The test consists of injecting the RF signal into the design, and typically a 1 kHz sinewave is AM modulated to the carrier. Sometimes the modulated signal gets demodulated as a combination of some components in the design and some parasitic components. As a result, there may be unwanted behavior when the demodulated signal gets inside electronic devices as a 1 kHz sinewave.

Part 6 looks at some more examples and how to combat them.

Essentially, from a design point of view, a common mode (CM) signal is the same signal injected into all parts of the design (including the power distribution network). For example, let’s consider an operational amplifier.

Imagine the same signal is applied to each pin, such as Vpp, Vnn, GND, Vin-, and Vin+. Because the impedance varies from pin to pin, some of the CM signals may become differential at some points, and when this happens, system malfunctions occur. 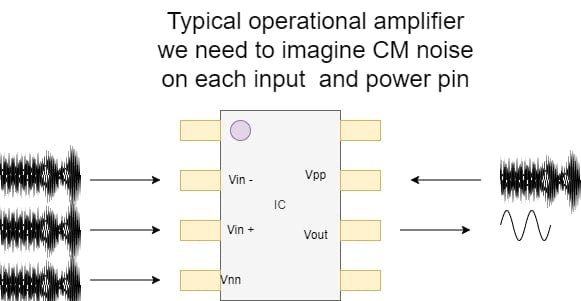 Figure 1. The pinout of a typical operational amplifier. The CM noise should be applied to all device pins except the output pin. Image used courtesy of Francisco Poderico

An operational amplifier with eight pins is shown in the figure above. To minimize the chance of failing either conductive or radiated immunity, during the design phase, assume that some CM noise may be present on each pin, usually any input and power supply pin.

You may wonder why I need to apply CM noise to the Vpp and Vnn (power) pins. Most CM noise is caused by poorly filtered power lines and, in a complex design, some unwanted CM noise comes from the power distribution network. The details of this will be discussed later, but for now, to filter the IC properly (in this example, an operational amplifier), imagine adding CM noise on almost every pin.

Operational Amplifier as AM Demodulator

As we have seen, each IC has almost every pin exposed to CM noise, so we need to reject the frequency ranges that aren't required in our design.

For analog signals, the simplest solution is an RC low-pass filter. As we discussed in Part 5, when we discussed how to reject CM noise on a BJT in configuration Common Emitter, we saw that adding a capacitor between the base and the emitter improved the rejection of RF noise.

It is a good strategy to add the signal path low pass filter to maximize the chance of passing radiated and conductive emissions. Let's look at Figure 2. 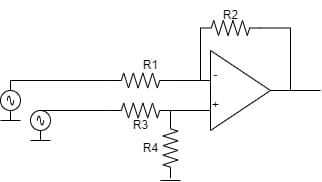 Taking a closer look at Figure 2, if all the resistors are the same, the output voltage is equal to the difference in voltage between the two signal generators. However, this circuit may fail the radiated or conductive immunity test despite its simplicity. This can be explained by replacing the two voltage generators with an RF signal (see Figure 3).

Figure 3. The figure shows how an operational amplifier may demodulate an RF signal entering the input stage. Image used courtesy of Francisco Poderico

During the CI or RI test, as we discussed earlier, a 1 kHz signal is AM modulated with the carrier. In Figure 3, I have drawn a possible model of how the RF may get into our operational amplifier. It is our job to reject all frequencies outside the bandwidth of our application. If we have an analog bandwidth of 100 kHz, we will filter all components above that frequency.

The first approximation can be accomplished by adding a capacitor parallel to R2 and one parallel to R4. However, this may be inadequate sometimes.

We need to find a better solution such that the high frequency should be rejected differently, and by failing this, we may fail the RI test. Based on my experience, nine times out of 10, you see a 1 kHz sinewave at the output of the operational amplifier. To solve this problem, add a low pass filter on each input where an RF signal may come from. This leads us to Figure 4.

Figure 4. Adding the RFI Low Pass filter on each input may solve the problem. Image used courtesy of Francisco Poderico

In Figure 4, the RC filter is called the RFI low pass filter in the EMC literature. It reduces the common mode "noise" that gets into the operational amplifier. It is possible that you have seen some solution in projects made by experienced designers. Even though an RFI filter reduces the RF signal, a considerable part of it may still pass through the Vin- and Vin+ of the operational amplifier, so more drastic measurements are required.

Please make sure you have read Part 4 of this series of articles before getting into the details here since it is similar to the technique we have used to bypass the peak detector in our diode and in our BJT, so it is important that you do so first. 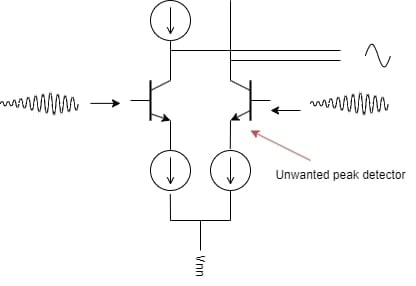 Figure 6. The input stage of an operational amplifier works as an AM demodulator. Image used courtesy of Francisco Poderico

In part 4, we solved the problem by adding a small capacitor between the base and the emitter, however, this time, we do not have access to the emitter of the transistor.

In Part 6, we have seen that operational amplifiers can become unwanted AM demodulators under some circumstances and may cause issues during RI/CI testing.  The design of electronic equipment for EMC compliance can be challenging; however, even the most complex issues can be solved by analyzing the problem thoroughly.