Read on to learn more about the control and software used in electrified transportation.

In recent years, transportation electrification has emerged as a trend to support energy efficiency and carbon dioxide emissions reduction targets. Modern electric vehicles contain a significant amount of software. The size of such software can reach up to a hundred million lines of code and runs on more than a hundred electronic control units (ECUs). It is estimated that about 90% of innovations in vehicle technologies are solely due to software and electronic components.

Control is the key aspect of the electrified powertrain. A combined mechanical and regenerative electrical braking system is implemented to maintain safety and enhance efficiency. Mechanical braking is employed when regenerative braking is insufficient due to limited electric machine torque and battery current. All these key systems require advanced control strategies to be implemented. The high-level vision of electrified transportation includes utilizing more electrical energy to power traction and non-traction loads in the vehicle. This is illustrated in Figure 1. 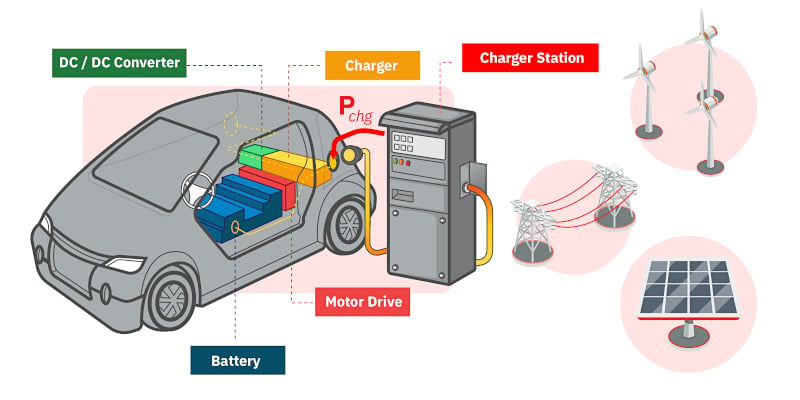 Embedded software has been increasingly taking over roles that traditionally belonged to mechanical, hydraulic, pneumatic and electrical components and is being used to implement new advanced features [1]. There is an extremely high level of complexity in modern systems mostly because of the interaction between different software components, hardware components, the physical environment and the user. It is crucial to make sure that the software is not only effective and efficient but also matches the requirements adequately. Rigorous development processes are adopted so critical software development complies with the specifications and standards.

Electrified powertrains typically require multilevel control systems. The estimation of vehicle state along with the measurement of the control unit is accomplished by the top-level powertrain. For example, applied torque on the wheels and inputs such as throttle actuation [2]. The lower-level subsystem control units include power electronics, electric drive systems, internal combustion engines, battery packs and so on. The controller commands these units so that fuel economy can be maximized and emissions can be minimized while satisfying the required driving performance. In general, electrified powertrains require sophisticated control. Some of the commonly used strategies include rule-based control and optimization-based control.

The electric motor drive control unit provides the accurate actuation of torque with high bandwidth using advanced control strategies. It is important for the control to be accurate and fast. The dynamic responses facilitate better performance in engine speed control, smoother engine start or stop function along with driveline damping controls. It is also key to maintain the torque control performance of the motor at near-zero and near-maximum speeds and maximize the system efficiency by choosing optimal operating points at both low and high speeds.

Some of the key aspects to consider during the development of software components include creation of precise and unambiguous requirements, traceability from requirements to code, and building extensive test suites such that the test cases are derived from the low-level requirements. This level of rigorous quality along with compliance with standards demands effective tools and techniques and reduction of human effort or intervention as much as possible. The automotive industry has successfully embedded a set of tools that are integrated into its development cycle throughout the software life cycle. It includes tools for requirements management, system design and models management, traceability, change and configuration management and so on. Recently, system modeling tools such as MapleSim, AMESim, and Dymola have been successfully used in automotive model-based systems engineering [2].

Model-based development (MBD) is an extremely effective development paradigm for automotive software. Automatic code generation tools and techniques help streamline the implementation or coding phase of software development. MBD helps move the focus of the development phase from code to models thus helping in enabling early verification and validation. This helps reduce the possible development costs as errors are found early in the development process. Several tools and methods have been employed in the automotive MBD process thus contributing to the steady decrease in the number of design and implementation errors [2].

The tremendous increase in the complexity of the software in modern vehicles prompted a need to standardize the software architecture. This led to the initiative called Automotive Open System Architecture (AUTOSAR). This is a standardized architecture with the goal of reusability of software and hardware components between original equipment manufacturers, suppliers and different vehicle platforms. It has a layered structure that hides the specific details in an electronic control unit and standardizes the interfaces between the software components thus enabling modularity and reusability.