Design engineers for gate drive are oftentimes required to employ turn-ON resistors that are bigger than the suggested capacity of the datasheet for IGBT, making the dvCE/dt slow down during current commutation. Infineon Technologies offers the 1EDS20I12SV, a new gate driver IC that controls a relatively constant dvCE/dt.

This article shows a comparison of two gate drivers: Infineon’s 1EDS20I12SV and a conventional gate driver IC. Both gate drivers are operated by the FF1200R12IE5, a 1200A/1200V power module intended for high power applications. This comparison unveils the advantages of the new control method.

It is helpful for the understanding of the control scheme of 1EDS20I12SV to analyze the turn-ON behavior of an IGBT as it is depicted in Figure 1 for an inductive load. For simplicity, the commutating diode is a SiC Schottky diode for which reverse recovery is purely capacitive. 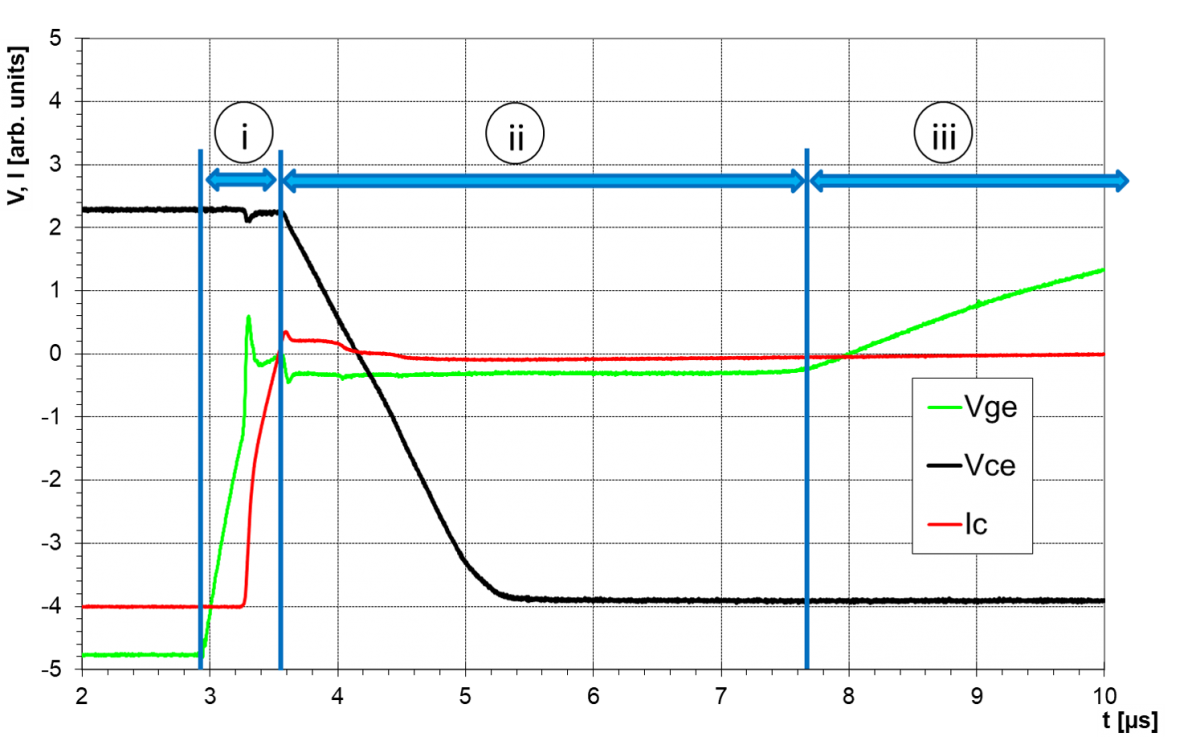 Figure 1. Typical turn-ON transient of an IGBT divided into 3 sections.

It is helpful for the understanding of the control scheme of 1EDS20I12SV to analyze the turn-on behavior of an IGBT as it is depicted in Figure 1 for an inductive load. For simplicity, the commutating diode is a SiC Schottky diode for which reverse recovery is purely capacitive.

The gate-emitter capacitance can be assumed to be voltage-independent, whereas the voltage dependency of Cgc is significant. The capacity Cgc is low at large values of Vgc but large for small voltages.

Note that the gate-collector voltage is given by

In a simplified picture, the turn-ON of the IGBT can then be divided into three phases:

The difference between voltage driving and current driving schemes then becomes obvious.

For a voltage driving scheme, the gate current is changing during the switching transition according to

Where Von is the voltage supplied by the gate driving circuit.

The choice of gate resistors is determined by the need to limit the voltage slope at small currents. This is detrimental for the losses when switching high currents.

With a gate current driving scheme, the dVce/dt during phase (ii) is independent of the load current, thus allowing optimized switching speed for a wide current range. The turn-ON energy is therefore only depending on the collector current amplitude at turn-ON.

Both driver boards are designed to fit the power module FF1200R12IE5. They contain external buffers (3), which amplify the driver IC s (1) output current. The buffer of the conventional realization (left in Figure 2) is based on bipolar transistors, while the current source gate driver board used p-channel MOSFETs for boosting the turn-ON.

The use of p-channel MOSFETs is mandatory for the gate current control loop. The turn-OFF boost circuit uses pnp-transistors similar to the conventional gate driver board. An output bias supply (2) provides the gate drive voltages for a +15 V / -8 V supply.

The current source gate driver IC contains the option to change the switching speed pulse-by-pulse during operation. This is an important function to reduce the turn-ON switching losses furthermore in the application [1].

The selection of the switching speed levels is done by applying an analog signal to a specific terminal on the control side of the gate driver IC. The turn-ON current level is active until the gate reaches the final gate bias voltage, which is 15 V in this case. 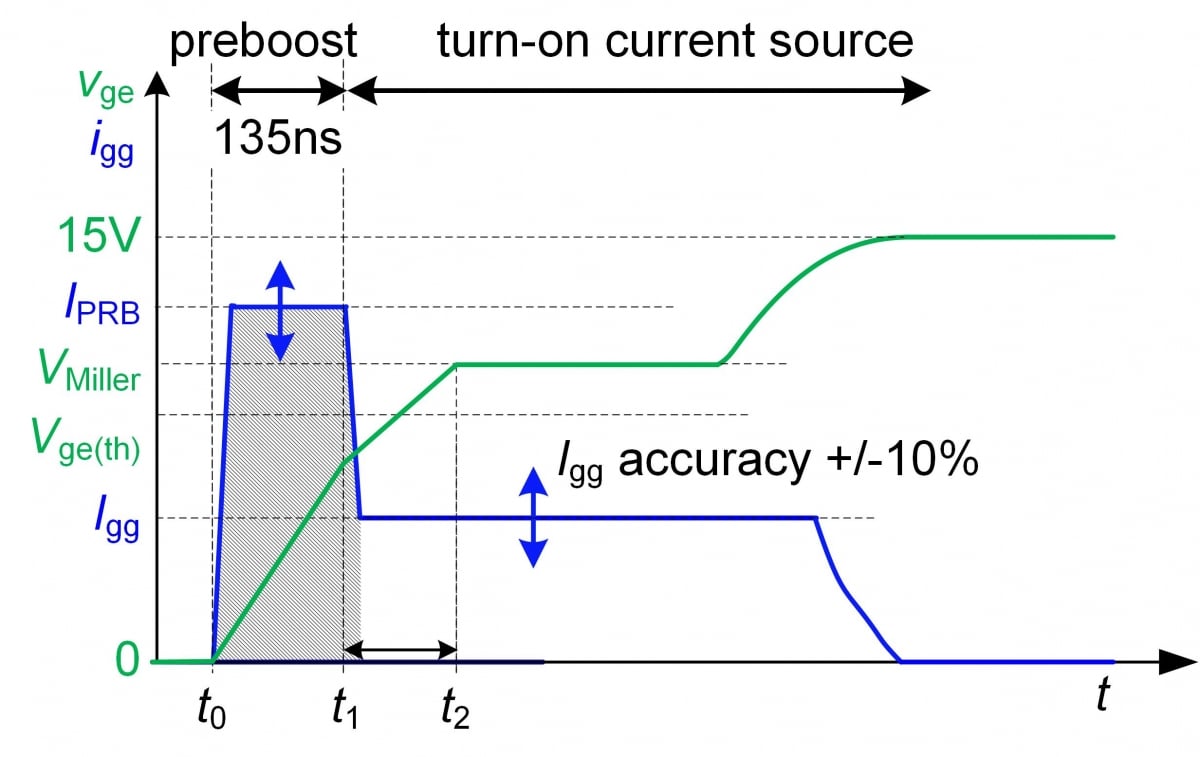 Both gate driver systems are evaluated on a double pulse test bench with automated switching parameter calculation. The double pulse technique is explained elsewhere. The boards are operated with various turn-ON speeds in order to evaluate as well the trend of each parameter as a function of the switching speed. This is achieved by using the integrated speed selection option of the current source gate driver IC and by variation of gate resistors of the conventional voltage source gate driver board.

Figure 4 shows an example of turn-ON waveforms. The gate-emitter voltage vGE (green) and the collector current iC (red) are smooth with acceptable small oscillations. The voltage slew rate dvCE/dt is evaluated shortly after the reverse recovery of the freewheeling diode (instance “1”). The diode takes over the voltage from the IGBT there and there is in many cases the largest dvCE/dt. Therefore, Figure 5 shows the transient of the diode ́s reverse voltage. 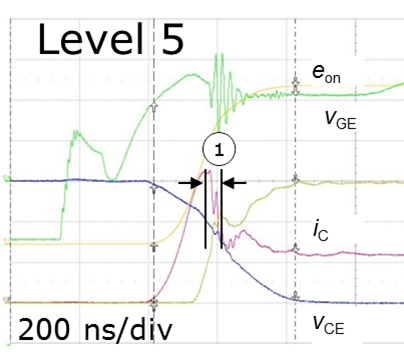 Figure 5 depicts the results and contains marks which designate the design point of the gate drive in order to keep the dvR/dt at 5 V/ns or below.

This yields in a constant dvR/dt. This is different for the voltage source board. The dvR/dt is constantly decreasing there, because the increasing miller voltage over the collector current range reduces the driving voltage for the gate current, and thus the gate current itself. 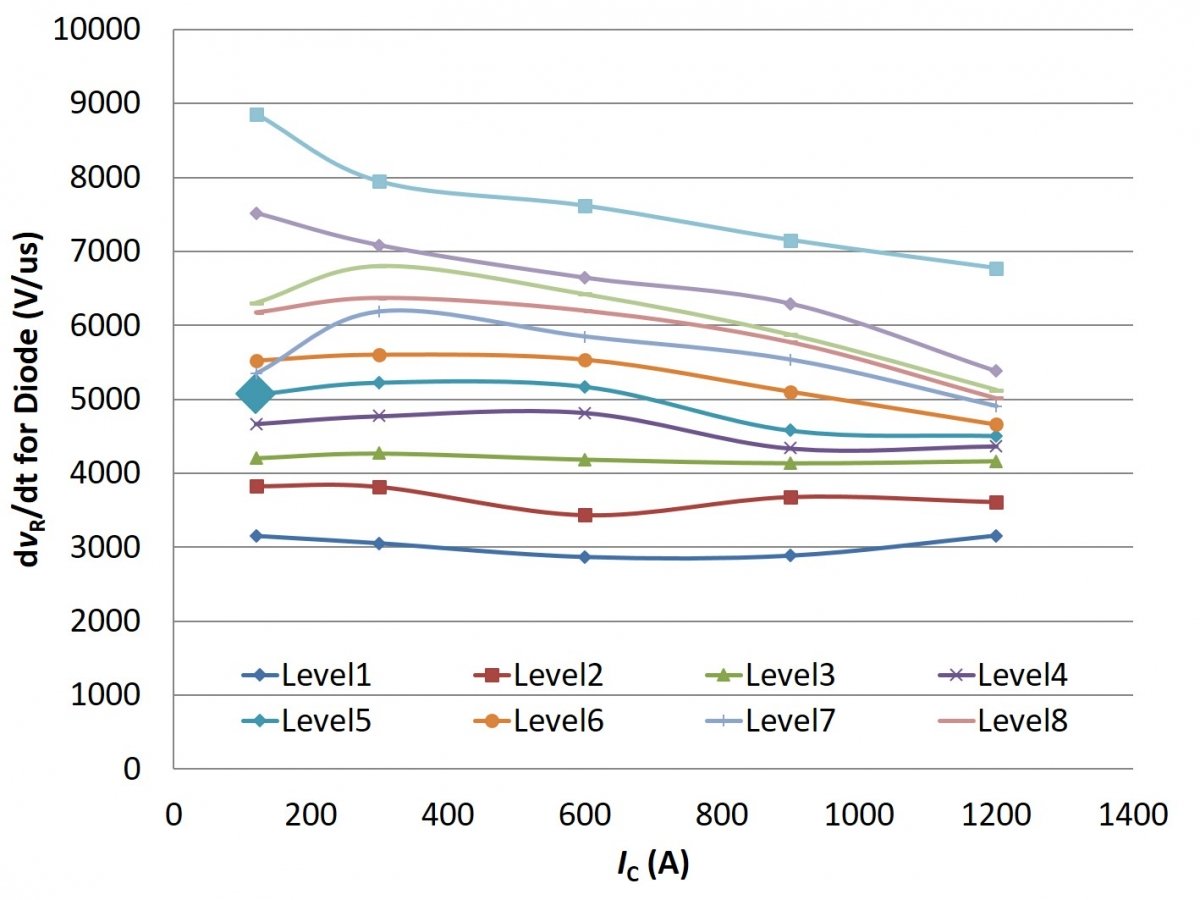 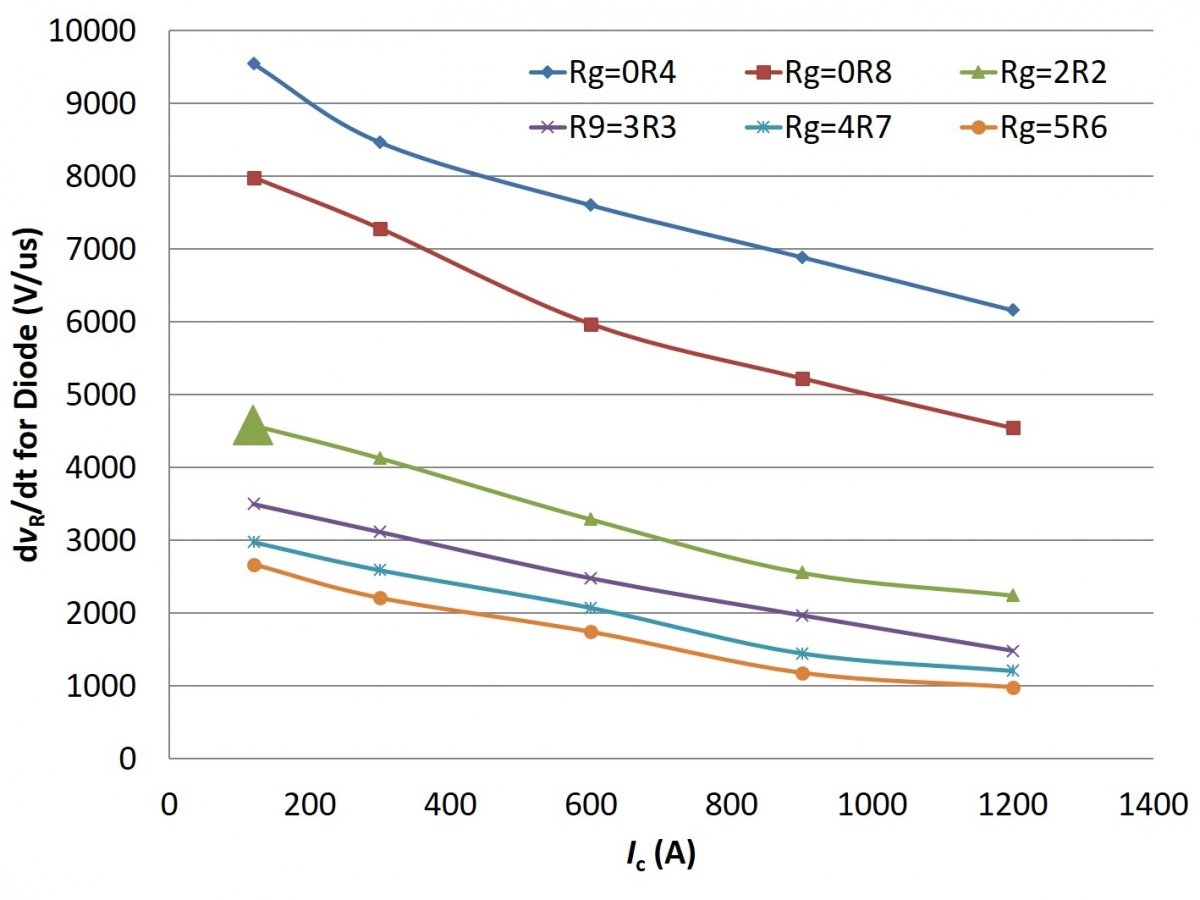 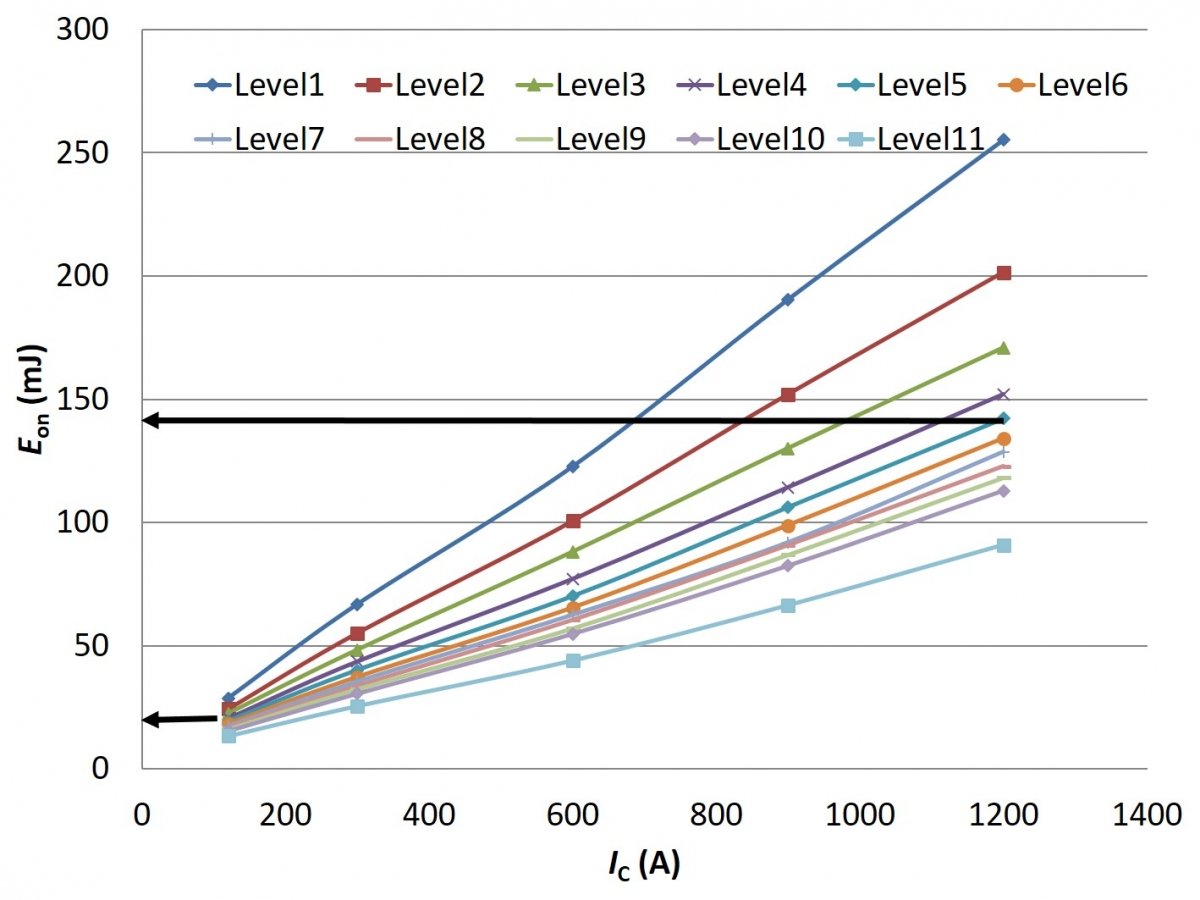 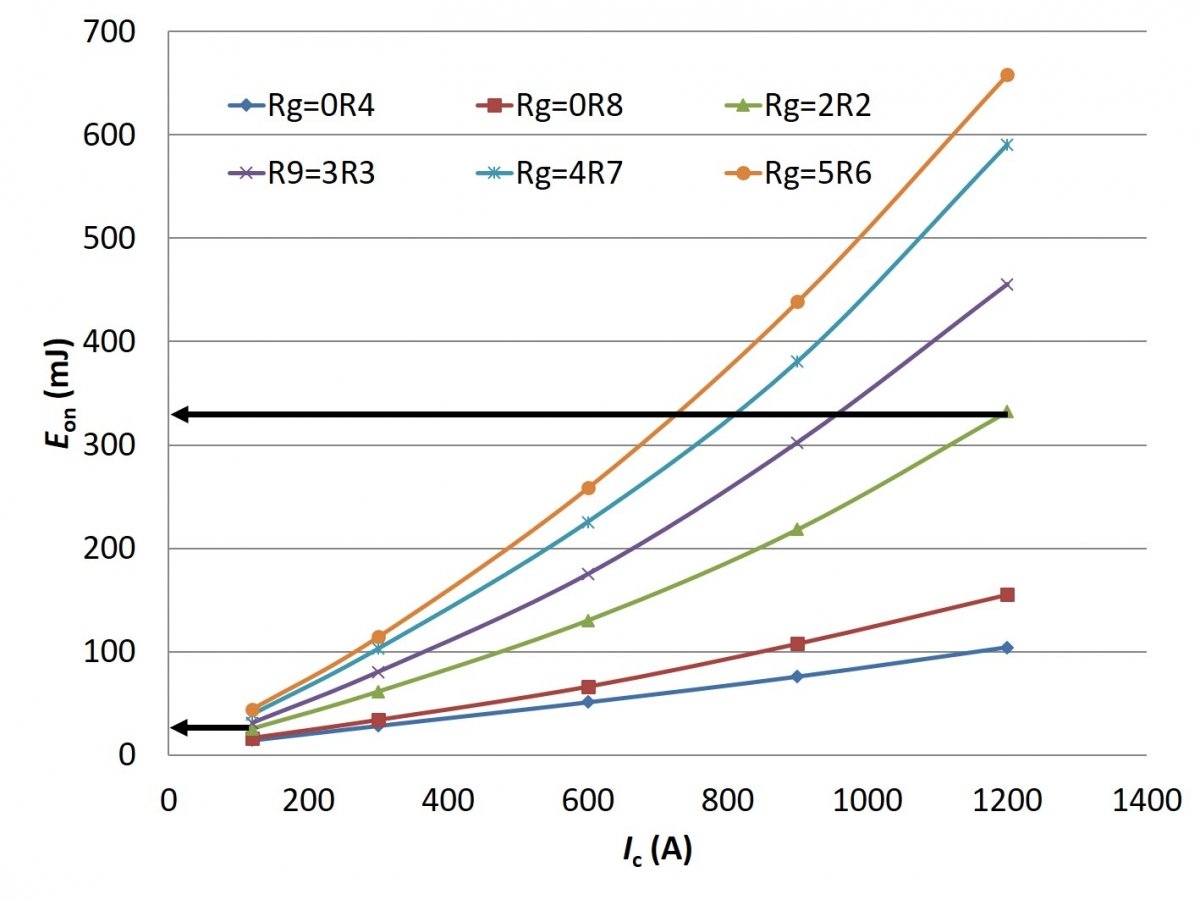 Figure 6 represents the turn-ON energy Eon of both solutions. The same starting conditions at 5 V/ns indicate also similar turn-on energy, which is approximately 20 mJ. However, the situation changes at high collector currents.

A higher performing system can be achieved at a competitive cost compared to a conventional system. The adjustment of switching speed during operation results in a new degree of freedom for the gate current gate driver because it can adapt the turn-ON with respect to other operating conditions, such as the IGBT temperature or the load condition. [6] This advantage translates of course into larger temperature margins or output current margins on a system level, as well.

Holger Hüsken works for Infineon Technologies. He has authored a variety of articles centered around power engineering, particularly high-speed IGBTs. He is the co-owner of patents centering on semiconductor device technology.