Research and performance evaluation of high-speed power devices that use materials such as SiC and GaN are progressing at a feverish pace. Researchers and manufacturers work to achieve further efficiency gains in switching power supplies. In recent years, the need to reduce power device switching losses and control switching noise has driven particularly active programs of research in which current sensors designed for wavelength observation with high-frequency response are specifically used to observe switching device response waveforms.

This article provides an overview of general characteristics of current sensors and also defines their respective strengths and weaknesses based on measurement results for high-frequency characteristics. Additionally, it offers precautionary information concerning the use of current sensors based on the high-frequency current measurement knowledge and expertise that Hioki has accumulated over many years of designing and providing current probes to industry.

Figure 2 illustrates the results of measuring rectangular wave response with each current sensor. The measured signal was created by converting a voltage signal with a rise time of 1 ns and an amplitude of 100 mA generated by a pulse generator into a current signal. The input voltage waveforms shown in the figure were synchronized with the measurement current generated by the pulse generator.

Although each current sensor’s waveform differs, it is their respective signal delays that are noteworthy. Both the current probe and Rogowski coil exhibit a delay of at least 10 ns. This delay is caused by the design of the current transformer (CT), and it is unavoidable for reasons related to the devices’ phase characteristics. When using an oscilloscope, current sensor delay can generally be corrected by deskewing.

Since the delay exhibited by a current sensor depends on its specific design, manufacturers publish representative values for each current sensor model to allow users to correct for the delay. Given the importance of voltage and current response timing when measuring switching loss, it is necessary to deskew not only the current sensor, but also the voltage probe to enable accurate measurement. With a delay of less than 1 ns, coaxial shunt resistors would seem to require no correction, but caution is necessary because the values shown here describe the response of the coaxial shunt resistor itself.

Coaxial shunts and oscilloscopes are generally connected via a coaxial cable, and measurement exhibits a delay that varies with the length of the cable. As a general rule, 1 m of cable introduces a delay of about 5 ns. In actual testing, delay-free measurement is achieved by using two coaxial cables of identical length, one to connect the pulse generator that generates the reference signal to the oscilloscope, and the other to connect the shunt resistor to the oscilloscope. 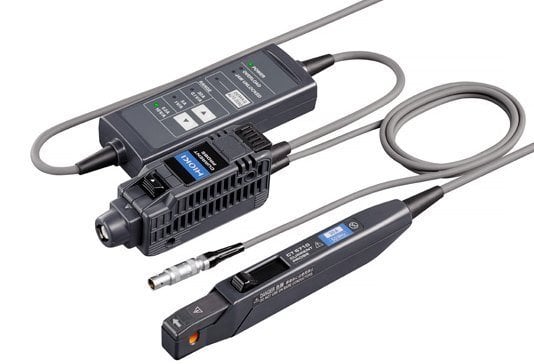 Figure 3 illustrates waveforms obtained by measuring a current waveform with a rise time of 5 ns. In this figure, each sensor’s output has been deskewed. The current probe exhibits the response that most closely approaches the reference signal. By contrast, the narrow frequency band of the Rogowski coil prevents that device from tracking the reference signal’s rising edge. Additionally, the high-frequency component superposed on the waveform, which consists of noise generated by the sensor’s Rogowski coil arithmetic circuit, is caused by the low S/N ratio of the sensor for this type of measurement, in which a current of about 100 mA is being measured.

This change is due to an increase in the detected voltage, the result of an ESL impedance value that has grown too high relative to the coaxial shunt resistor’s resistance value of 0.1 Ω to be ignored in the high-frequency domain. Although the coaxial shunt resistor can respond to signals with short rise times since it exhibits less gain attenuation at high frequencies than the other sensors, the device’s response is accompanied by ringing and overshoot. 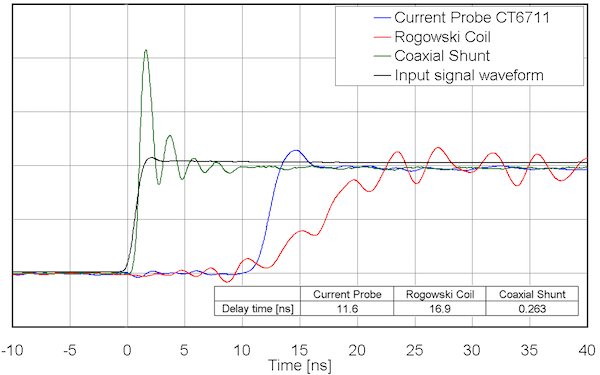 Figure 2: Response delay times for each sensor when measuring an input signal with a rise time of 1 ns 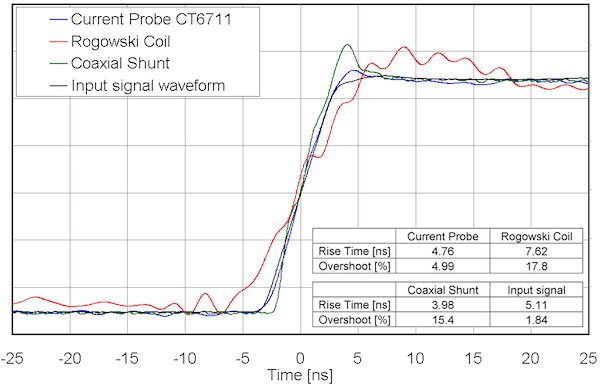 Figure 3: Sensor startup response when measuring an input signal with a rise time of 5 ns 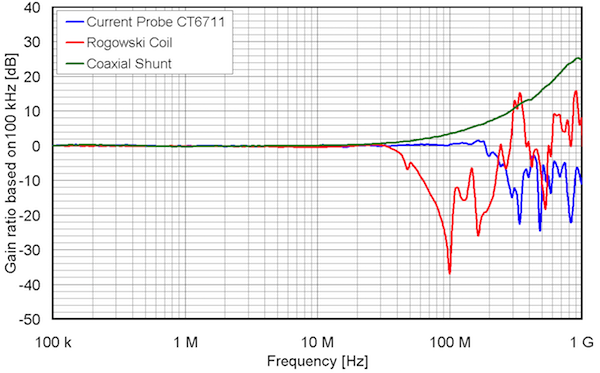 Figure 4: Gain-frequency characteristics for each sensor

The Rogowski coil’s frequency characteristics remain flat up to its specifications value of 30 MHz. Increased gain above 0 dB in part of the high-frequency domain consists of noise components. 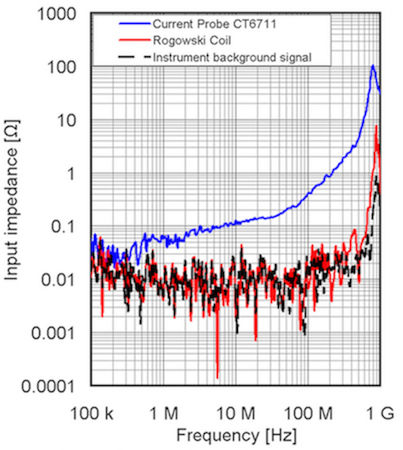 Although insertion impedance tends to increase with frequency due to the current probe’s use of a core made of a magnetic material and shielding for the sensor, this effect is limited to less than 0.1 Ω up to 10 MHz for the Hioki CT6711. This level of performance is the result of the product’s use of Hioki’s zero-flux method, which reduces the operating magnetic flux level of the magnetic core.

The Rogowski coil has an insertion impedance of approximately zero since no magnetic materials are used in its construction.

Apart from differences in characteristics, each sensor has associated precautions that should be borne in mind to ensure safety.

If the shunt resistor’s rating (in joules) is exceeded, it may burn up and leave the circuit open, damaging the measurement circuit in the process. Consequently, caution is necessary, for example when varying the switching duty ratio.

Sustained measurement of a large, high-frequency current could cause the sensor head to heat up due to the phenomenon of induction heating, damaging the sensor. Always refer to the manufacturer’s frequency derating characteristics when using such devices.Strengths and Weaknesses of Current Sensors with High-Frequency CurrentsThis section offers a brief summary of the strengths and weaknesses of each current sensor type.Coaxial Shunt ResistorsSince these devices excel at high-frequency response, they are an effective choice for use in di/dt evaluation. Coaxial shunt resistors should be connected so as to minimize wire length. Current ProbesSince these devices offer exceptionally flat frequency characteristics, they are an effective choice when measuring ringing, overshoot, and noise components. Caution is necessary concerning insertion impedance caused when the sensor is clamped in place.

Due to the ease with which they can be clamped onto small components and their low insertion impedance, Rogowski coils can make measurements without affecting the circuit under measurement, making them an effective choice for use in applications such as the evaluation of finished circuit boards. They are generally not suited to use in measuring minuscule and low frequencies due to their low S/N ratio.

This section introduces a technique for analyzing common-mode noise using the 0.5 A range of the Hioki Current Probe CT6711 (Figure 1). Figure 6 provides a block diagram for a noise analysis system with notations indicating measurement points, while Figure 7 illustrates the current waveforms measured using current probes and the results of an FFT analysis of those waveforms. As shown in Figure 6, the two primary-side measurement signal downstream from after AC/DC conversion and the three secondary-side 3-phase lines downstream from PWM modulation were measured together, and the system’s 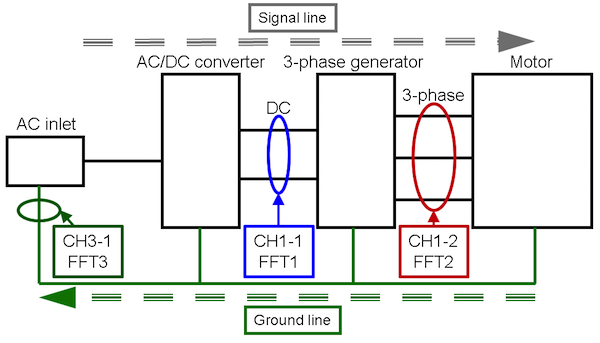 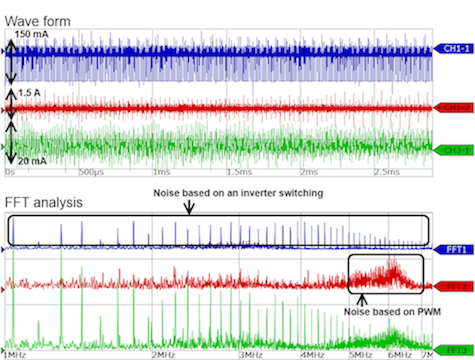 noise components were extracted. An FFT analysis of these signals revealed switching noise occurring during AC/DC conversion across all frequencies in the primary-side signals as well as a noise distribution near 6.5 MHz in addition to the switching noise in the signal lines downstream from PWM modulation. By contrast, when the GND line current waveform near the power line inlet was measured using the CT6711 and the results subjected to FFT analysis, the authors were able to identify a frequency component composed of two noise components superposed on the signal line. By subjecting the frequency distribution of the noise components superposed on the GND line to pattern analysis in this way, it is possible to identify common-mode noise components and their sources.

Although subjecting signals to FFT analysis to extract noise components and analyzing their sources is a typical analysis technique, the CT6711’s 0.5 A range can be used to identify noise components with a high level of sensitivity. The effectiveness of this approach stems from the ability to reduce the effect of the full-scale error of the instrument to which the current probe is connected. Since current probes generate the most accurate waveform output when clamped in place, they are well suited to use as current sensors for investigating and analyzing common-mode noise in systems as illustrated here.

In writing this paper, the authors built an evaluation system using development environment devices and made measurements using current sensors designed for observing waveforms. As a result, they were able to reaffirm differences in current sensor characteristics. Different types of current sensors have their own strengths and weaknesses, and they sometimes introduce sources of error that cannot be inferred from their product specifications alone. It is necessary to use such sensors based on an appropriate understanding of this fact.

This paper also offered an example of a method that can be used to analyze common-mode noise occurring in inverter-operated motors using the 0.5 A range of the Hioki Current Probe CT6711.

As the development of increasingly high-speed power devices continues to drive up the frequency of noise components superposed on switching signals, the CT6711, which delivers both high sensitivity and broad-band frequency characteristics, will continue to serve as an effective tool for waveform observation.