Research on wide bandgap (WBG) devices has been conducted for many years. The reason that the properties of Gallium Nitride (GaN) and Silicon Carbide (SiC) excite power engineers is that they show substantial performance improvements over their silicon-based counterparts.

In this article, we present the results of a head-to-head comparison of GaN E-HEMTs and SiC MOSFETs used in a DC-DC synchronous buck converter application. Due to lower internal capacitances and zero reverse recovery charge, we conclusively demonstrate that GaN E-HEMTs offer significant improvements in power conversion efficiency, especially at higher frequencies.

To simplify comparing the GaN E-HEMT and SiC MOSFET, the test used a common evaluation motherboard GS665MB-EVB, paired with an interchangeable daughterboard (Figures 1-4). These boards are configurable either as a buck, boost or double-pulse tester. The two daughterboards also have a very similar design. They both contain the same PCB layout, 2 oz. copper, 4 PCB layers, homogeneous thermal via and layout parasitics. 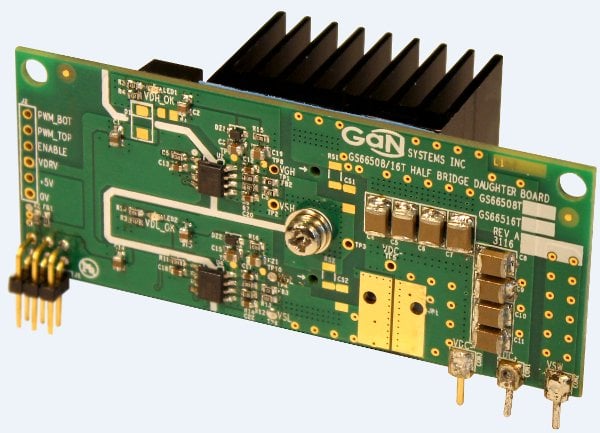 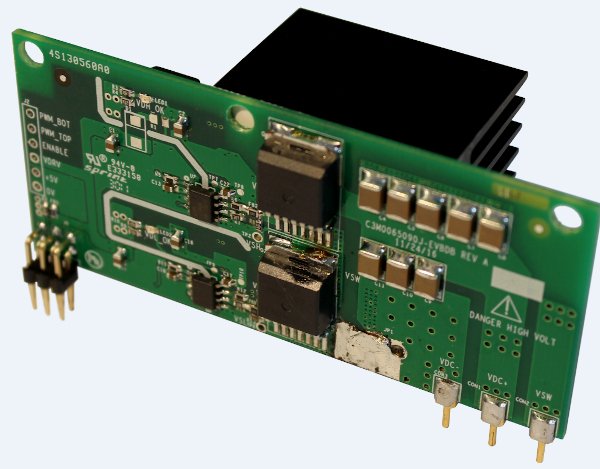 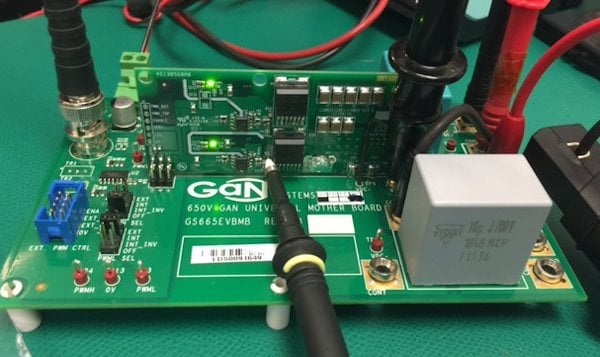 Table 1 shows the electrical characteristics of the semiconductor devices GaN E-HEMT GS66508T and the Cree SiC MOSFET C3M0065090J. These characteristics have a major influence on the fundamental performance of the devices.

A half-bridge, hard switching, double pulse test was conducted under 400 V/ 15 A on both GaN and SiC daughterboards. The turn-ON resistor Rg(on) was 10 Ω, while the turn-OFF resistor Rg(off) was 1 Ω. The results of two double pulse switching tests follow. 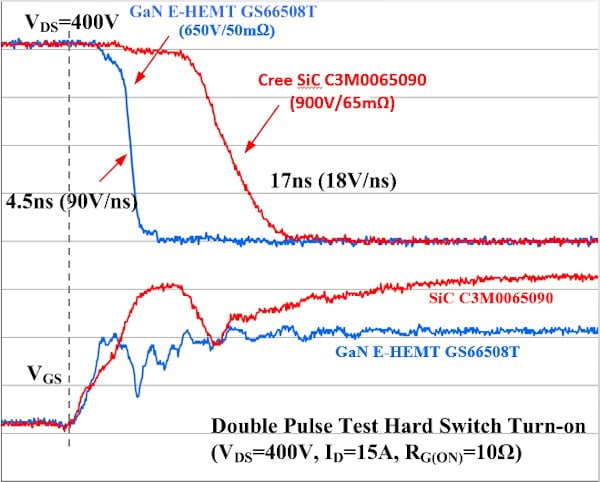 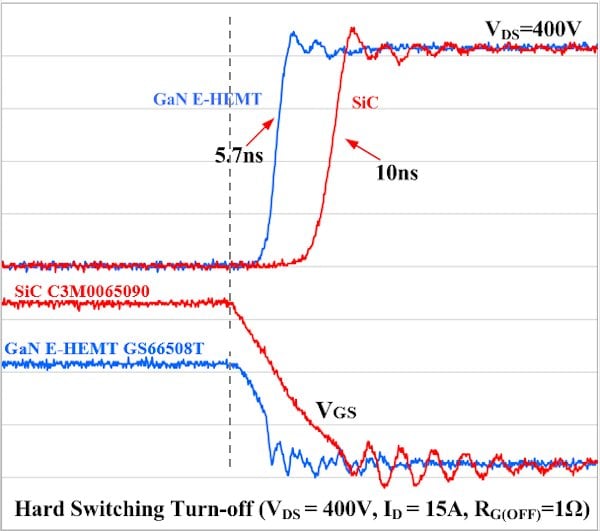 Figure 7 shows the switching loss measurements with a drain-to-source voltage of 400 V, drain current from 0 to 30 A for GS66508T and C3M0065090J. The turn-ON loss dominated the overall hard switching loss.

The result, shown in Fig. 8, clearly shows that at higher switching frequencies, GaN provides a significant performance improvement over SiC. For instance, at 100 kHz, GaN provides 10 W savings, but in the same system at 200 kHz, 20W is saved.

To measure the thermal resistance Rth(JA) of both devices, a 35x35 mm heatsink was mounted on the bottom of both daughterboards. In addition, an electrical fan with an airflow of 12.0 CFM (0.340 m3/min) was attached to the heatsink. 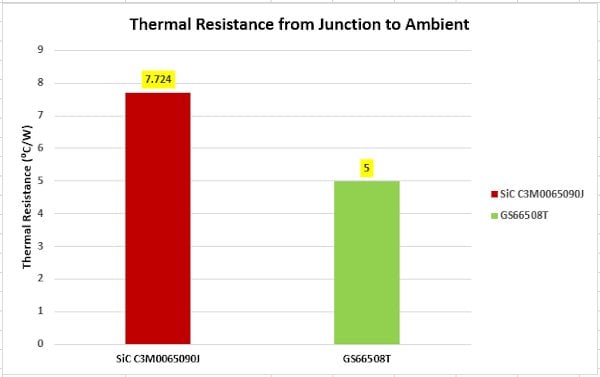 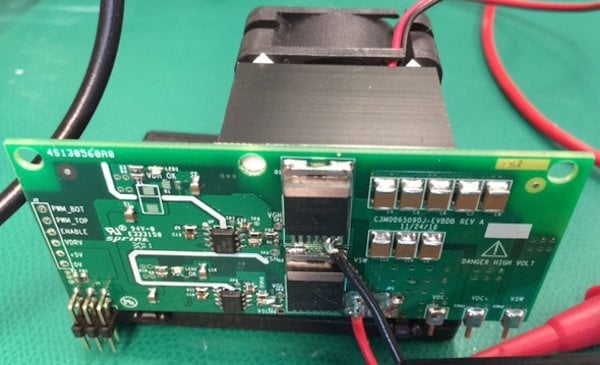 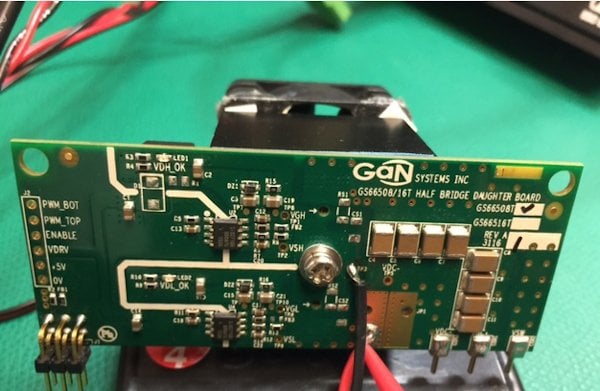 A synchronous buck converter with an input voltage of 400 V and an output voltage of 200 V was tested. At a 200 kHz switching frequency, the output power varied from 100 W to 1 kW. Figure 12 compares the sync buck converter system efficiencies and the device’s hard-switching junction temperature using semiconductor devices GaN E-HEMTs versus SiC MOSFETs.

The graph shows that the efficiency and junction temperature using GaN E-HEMTs performed better than SiC MOSFETs under the same test conditions. The power loss of the devices was equal to (Tj-Tamb)/(Rth(JA)). From 0 to 1 kW, at 200 kHz GaN Ploss is only 45%-59% that of SiC. Table 2 shows the performance improvement of GaN E-HEMTs over SiC MOSFETs at an output power of 900 W. At Pout = 900 W, the Tj of the GaN E-HEMT was 59⁰C lower than the SiC MOSFET, and the power loss of GaN was 5.38 W lower than that of SiC.

The superior performance of GaN versus SiC semiconductors can be attributed to its lower Eon/Eoff. Because the conduction loss was small, the switching loss (Eon+Eoff)*fsw accounts for over 85% of the device’s total power loss. Hence, as the switching frequency increases, GaN E-HEMTs will perform better than SiC MOSFETs. 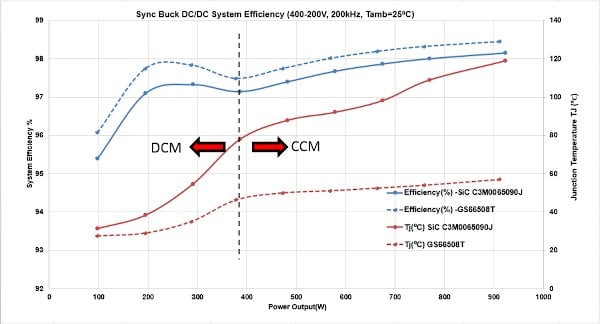 This article compares the fast switching device characteristics of GaN E-HEMTs versus the best competing SiC MOSFETs. When used in synchronous buck DC/DC converter applications, the converters that use GaN E-HEMTs exhibit much higher efficiencies than ones that use SiC MOSFETs.

In this application, the results clearly demonstrate that the performance of GaN E-HEMTs exceeds the performance of the best SiC MOSFETs in terms of switching speed, parasitic capacitance, switching loss, and thermal characteristics. Furthermore, compared with their SiC semiconductor device counterparts, GaN E-HEMTs facilitate the construction of significantly more compact and efficient power converter designs.

Jason (Jianchun) Xu worked as a Senior Applications Engineer at GaN Systems Inc. He was responsible for doing competitive analysis on costs, power loss, efficiency, thermal and system design advantages. He also works with customers, marketing and engineering department to define product roadmaps. He earned his Bachelor's and Master's Degree in Electrical Engineering and Automation at Nanjing University of Aeronautics and Astronautics located in Jiangsu, China. He also received another Master's degree in Electrical Engineering at the University of Ottawa located in Ottawa, Canada.

Di Chen worked as a Global Application Manager at GaN Systems Inc., Ottawa Canada. He is specialized in power electronics, power supplies, as well as circuit designs. He earned his Bachelor's Degree in Electrical and Electronics Engineering at Nanjing University of Aeronautics and Astronautics, Jiangsu, China. The then acquired his Master's Degree in Electrical Engineering - Power Electronics at The University of British Columbia located in Vancouver, Canada.