What Are Power Resistors?

Power resistors are designed to withstand and dissipate large amounts of power. The common trait of all power resistors is that they are built to dissipate as much power as possible, while keeping their size as small as possible. In general they have a power rating of at least 5 W. Power resistors are made from materials with a high thermal conductivity, allowing efficient cooling. They are also often designed to be coupled with heat sinks to be able to dissipate the high amounts of power. Some power resistors even require forced air or liquid cooling while under maximum load to efficiently remove the heat generated.

Some power resistors are wirewound while others are made from wire grids for ease of cooling. An example use for power resistors are load banks used to dissipate power generated during engine braking in vehicles using electrical motors, such as locomotives or trams.

A power resistor is a resistor designed and manufactured to dissipate large amounts of power in a compact physical package.

Wirewound resistors are made by winding a metal wire around a solid form, often made of ceramic, fiberglass, or plastic. Metal caps are attached to the end of the winding and metallic leads are attached to the ends. The end product is often coated with a non-conductive paint or enamel to offer some protection from the environment. Wirewound resistors can be built to withstand high temperatures, sometimes up to 450 °C. These resistors are often built to tight tolerances thanks to the material used, an alloy of nickel and chrome called Nichrome. The body of the device is then coated with a non-conductive paint, enamel, or plastic.

There are several winding methods including: helical winding, edge-winding, and bifilar winding. The helical type is the ordinary winding in which a wire is wound in a helix around a cylindrical core. Since the wire is coil-shaped, this type of resistor also has a certain inductance. To avoid the potential interference with other devices and the generation of unwanted magnetic fields, wirewound resistors can be made using a bifilar winding, which is wound in two directions, reducing the electromagnetic fields created by the resistor. Edge-wound resistors are made by winding a strip of metal by its wider edge. These are usually coreless, air-cooled and can dissipate more power than the helical type.

Grid resistors are large matrices of metal strips connected between two electrodes. They vary in size, but can be as large as a refrigerator. It is not uncommon to see grid resistors with resistance values under 0.04 Ω that can withstand currents of over 500 A. These grid resistors are used as brake resistors and load banks for railroad vehicles, neutral grounding resistors, load testing of generators, and harmonic filtering for electric substations. 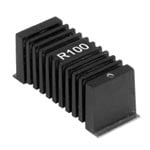 Chip resistors are resistors that look like integrated circuit chips. Surface mount power resistors are made from many different materials, such as pressed carbon, ceramics and metal (cermet), or metal foil. Wirewound chip resistors are also available. SMD resistors are actually smaller form, surface mounted chip resistors. The resistor itself consists of a metal oxide film deposited onto a ceramic substrate. The thickness and length of film determines the resistance. They have power dissipation ratings much lower than those of grid resistors or water resistors and can usually dissipate no more than a few watts, provided they have appropriate cooling.

Water resistors consist of tubes filled with a saline solution with an electrode at both ends. The concentration of salt in the solution controls the resistance of the resistor. Water in the tube provides a large heat capacity which allows high power dissipation. Some high power water resistors use in pulsed modes utilize copper sulfate solutions instead of saline.

Liquid rheostats, or salt water rheostats, are a type of variable resistor in which the resistance is controlled by submerging the electrodes into a saline solution. The resistance may be increased or decreased by adjusting the electrode position inside the liquid. The mixture must not be allowed to boil in order to stabilize the load. Liquid rheostats are slightly outdated, but are still constructed for use in some diesel generators.

Power resistors are used when there is a need to safely convert large amounts of energy into heat using electrical energy as a medium. They are used as controllable power dissipation devices, protective devices, and devices that simulate real world loads.

High power resistors are used in locomotives and trams to safely convert the kinetic energy of the vehicle to heat. Since stopping heavy vehicles moving at high speeds requires dissipating large amounts of energy, classic disc brakes would wear out too fast and their maintenance would be too expensive. Because of that, regenerative braking tends to be used. In regenerative braking, kinetic energy is transformed into electrical energy and fed back into the supply network. However, when regenerative braking is not available, power resistors are used. Resistance brakes offer controlled braking power without introducing wear to the parts. It is often necessary to dissipate many kilowatts for extended periods of time.

Load bank resistors are devices used to safely simulate a real-world load. They are used to load-test generators, turbines, and battery UPS systems. Resistive load banks provide a known adjustable resistance value in a compact package as opposed to real loads which can be dispersed over a large area, random in value, and are usually not exclusively resistive, but may have an inductive or capacitive component as well. AC load banks can withstand and dissipate as much as 6 megawatts of power, which is quite a lot, but such large load banks can be the size of a room, and they are equipped with active cooling to prevent thermal damage.