What is a Rheostat? 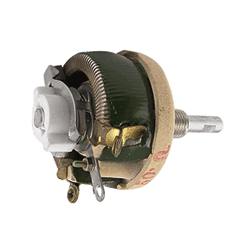 A rheostat is a variable resistor which is used to control current. They are able to vary the resistance in a circuit without interruption. The construction is very similar to the construction of potentiometers. It uses only two connections, even when 3 terminals (as in a potentiometer) are present. The first connection is made to one end of the resistive element and the other connection to the wiper (sliding contact). In contrast to potentiometers, rheostats have to carry a significant current. Therefore ,they are primarily constructed as wirewound resistors. Resistive wire is wound around an insulating ceramic core and the wiper slides over the windings.

Rheostats were often used as power control devices, for example to control light intensity (dimmer), speed of motors, heaters, and ovens. They are not typically used for this function anymore. This is because of their relatively low efficiency. In power control applications, they have been replaced by switching electronics. As a variable resistance, they are often used for tuning and calibration in circuits. In these cases they are adjusted only during fabrication or circuit tuning (preset resistor). In such cases trimpots are often used, wired as a rheostat. But dedicated 2-terminal preset resistors also exist.

A rheostat is a variable resistor which is used to control the current flowing in a circuit.

Several types of rheostats exist. The rotary type is the most commonly used in power control applications. Most of the time these rheostats use an open construction, but enclosed types are also available. Just as with potentiometers, multi-gang types are available. They are used to control multiple applications in parallel or to increase the power rating or adjustment range. Optionally, rheostats can be equipped with a mechanical stop to limit the minimum or maximum resistance. For special applications they can also be built with tapered windings.

Slide rheostats are also available and often used for education and in laboratory environments. Linear or slide types are constructed of resistive wire wound on an insulating cylinder. A sliding contact is used to increase or decrease the resistance.

Trimmers used as a variable resistance are very common on printed circuit boards. While dedicated preset resistors with 2 terminals exist, the 3-terminal trimmer potentiometer is more common and is often used by wiring it as a rheostat.

How to Wire a Potentiometer as Rheostat?

The following symbols are used according to the IEC standard.