What is a Thermistor? 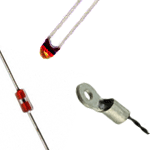 A thermistor is a resistor for which the resistance changes significantly with a change in temperature.

Thermistors are typically ceramic semiconductors. In most cases they are composed of metal oxides, which are dried and sintered to obtain the desired form factor. The types of oxides and additives determine their characteristic behavior. For NTC thermistors, common materials include cobalt, nickel, iron, copper, and manganese. For PTC thermistors, commonly used materials are barium, strontium, and lead titanates.

The NTC type is used when a change in resistance over a wide temperature range is required. They are often used as temperature sensors in the range of -55 °C to 200 °C, although they can be produced to measure much lower or higher temperatures. Their popularity can be accounted to their quick response, reliability, robustness, and low price.

The PTC type is used when a sudden change in resistance at a certain temperature is required. They exhibit a sudden increase in resistance above a defined temperature, called the switch, transition, or Curie temperature. The most common switching temperatures are in the range of 60 °C to 120 °C. They are often used for self-regulating heating elements and self-resetting over-current protection.

Several package types and sizes are available. The radial leaded type is the most common and is primarily constructed from epoxy. For applications in harsh environments, glass encapsulated packages are more suitable. Integrated packages are also available, such as threaded housings, lugs, or probes for easy mounting. The following figure shows some examples of available package types.

The following symbols are used according to the IEC standard.