What is a Wirewound Resistor?

A wirewound resistor is an electrical passive component that limits current. The resistive element is an insulated metallic wire that is wound around a core of non-conductive material. The wire material has a high resistivity, and is usually made of an alloy such as nickel-chromium (Nichrome) or a copper-nickel-manganese alloy called Manganin. Common core materials include ceramic, plastic, and glass. Wirewound resistors are the oldest type of resistors that are still manufactured today. They can be produced very accurately and have excellent properties for low resistance values and high power ratings.

Definition of a Wirewound Resistor

A wirewound resistor is a resistor where a wire with a high resistivity is wrapped around an insulating core to provide the resistance.

Example of a wirewound resistor construction

Wirewound resistor construction varies widely. The manufacturing method and choice of materials is dependent on the way the resistor will be used in a circuit. All are made by winding a wire around a core. The resistance value is dependent on the resistivity of the wire, the cross section, and the length. Since these parameters can be accurately controlled, a high precision resistance can be achieved. For high tolerance requirements, the resistance value is measured to determine exactly the length to cut the wire. To create a high resistance, the wire diameter needs to be very small and the length very long. Therefore, wirewound resistors are mainly produced for lower resistance values. For low power ratings, very thin wire is used. The handling of very thin wire is critical. Any damage may sever the wire. After winding, the wire is well protected from moisture to prevent electrolytic corrosion.

There are also wirewound resistors with a high power rating for 50 W or more. These resistors have a quite different construction. Compared to other resistor types such as metal film, the wire diameter is relatively large and, therefore, is more robust.

In the following table the properties of the most common alloys are given.

For high precision measurement applications, the difference in material of the resistor wire and the connecting leads can cause a negative effect. At the junction between the materials a change in temperature can cause a small unwanted voltage across the resistor. This is called the thermoelectric effect.

Because of the design principle of the wirewound resistor, which is basically an inductor, these resistors have the worst high frequency properties of all resistor types. There are several ways to apply the winding, depending on the application of the resistor. To reduce these parasitic effects, several specialized winding types exist: 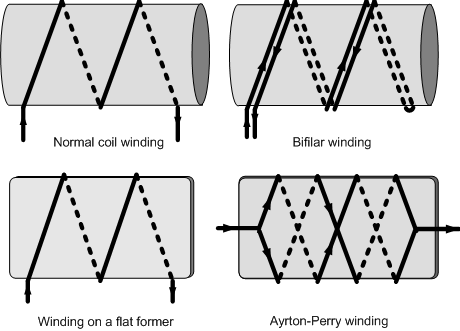 These types of windings are applied for measurement devices and decade banks. The drawback of these methods is the difficulty of the manufacturing process.

Wirewound resistors can roughly be classified in two types: precision and power. They can be modified for use in current sensors, temperature sensors, and potentiometers. These versatile resistors can be used in a wide range of applications.

High precision wirewound resistors are typically used in precision audio frequency (AF) attenuators, measurement bridges, and calibration equipment. Typical values for the tolerance of the resistance value is 0.1% or better. The temperature coefficient of resistance is typically about 5 ppm/°C, which is considerably better than most metal film resistors (around 25 ppm/°C). The stability is also fairly good, with values of 35 ppm change for a year of operation at full power rating. The temperature rise of these resistors is usually below 30 °C. Therefore they can be coated by epoxy resin materials. In practice, a designer might decide that a resistor needs to be within ±0.05% of the design value for a particular circuit application. To account for aging, TCR and other parameters, the designer might then specify a tolerance of ±0.01%. This ensures that the resistor stays within the required resistance range over time and varying circuit conditions. 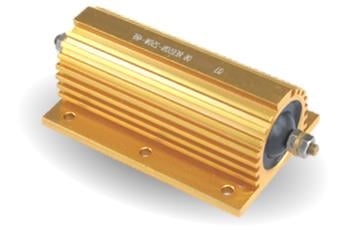 Silicone resins are used for the lowest power dissipation levels. These are compact resistors that can withstand increases in temperature up to 300 °C above the ambient temperature.

Another type of coating is vitreous enamel. This traditional coating has good insulating properties at low temperatures, but the insulating capability is reduced when operated at the full rated temperature. This property makes it less commonly used. The maximum working surface temperature is up to 400 °C. The TCR varies from 75 to 200 ppm/°C, and typical resistance values are in the range from 1 Ω to 10 kΩ.

The majority of the power wirewound resistors have a ceramic core and a ceramic coating to protect the winding. The ceramic coating combines a high insulation and physical protection with good heat dissipation. Typical power ratings are between 4 and 17 W. The maximum surface temperature is around 300 °C and the TCR varies from 250 to 400 ppm/°C. The resistance values are between 10 kΩ and 22 kΩ. Usually they are manufactured with leads that allow for vertical or horizontal mounting.

For the highest power dissipation values, wirewound resistors have an aluminum case with fins. These fins give a larger surface area from which to dissipate heat, letting the resistor handle more power without being damaged. These resistors have a ceramic core and a silicone resin coating, encased in an aluminum extrusion. The surface is anodized to maintain a good insulation resistance. These power wirewound resistors have a typical power rating of 25 to 50 W. This assumes that the resistor will be mounted on a metal surface to assist with the power dissipation. The maximum surface temperature is around 300 °C and the TCR is low with around 25 ppm/°C for resistance values above 50 Ω. Usually the TCR is higher for lower resistance values. 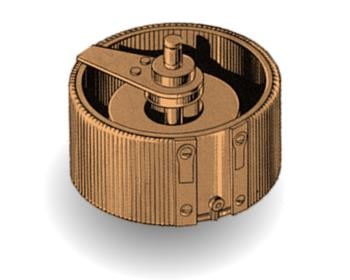 Enhancing the inductive effect that is natural to wirewound resistors can let these resistors be used as current sensors. Inductive reactance is determined by the inductance of the device and the current flowing through it. Current sensing devices measure the reactance and convert it to a current reading. These are used in situations where a high current condition may occur, and it is desirable to correct it before tripping a breaker. Large cooling water pumps and freezer units are examples of this type of application.