What is a Blower Resistor?

Blower resistors are resistors which are used to control the fan speed of automotive blowers. The fan speed can be changed either by switching the blower resistor resistance mechanically using a rotating lever, or electronically by the air conditioning system. The change in resistance then limits the current through the motor, which dictates the speed at which the blower fan operates. Blower resistors, being a mechanical component, are prone to wear and are the most common point of failure in a car’s heating system. This article will focus on mechanical blower resistors, their construction and troubleshooting. 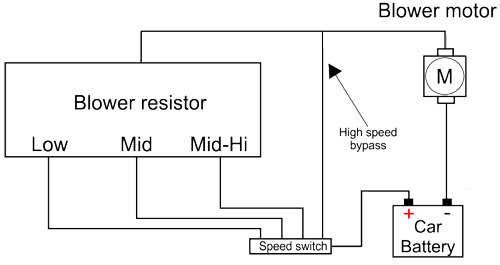 The individual resistors inside the pack are usually wire wound and they may fail by burning out from use, and may also fail due to mechanical stresses and vibrations typically found in an automotive environment. When a blower resistor is faulty, the fan will usually operate at one speed only, usually the highest speed setting possible. Sometimes, only some of the speed settings will be faulty while others might work.

When trying to diagnose a blower fan motor, the following steps should be followed:

If a car’s blower motor doesn’t work at all, there are several components to be checked in the system:

A word of caution: the blower resistor gets very hot during normal operation, so care must be taken to avoid burns and other injuries.