Standardization is a key element in the design of electronic components. A huge amount of effort and money is saved by having standards for resistor sizes, values, markings, symbols and measurement methods. Although international standards like the IEC (International Electrical Commission) and national standards such as ANSI (American National Standards Institute) are widely accepted, resistor manufacturers often use their own definitions. Therefore it is always important to carefully check the manufacturer's documentation.

This interactive tool let’s you easily enter the resistor color band information and then returns the resistance value, tolerance and temperature coefficient. It even indicates if the resistor belongs to an E-series (preferred values).

SMD (Surface Mount Device) resistors are marked with a (alpha)-numerical code to indicate the resistor value and tolerance. Often these resistors are too small for the resistor color code. Two popular marking systems exist: the 3 and 4 digit code and the EIA-96 code. 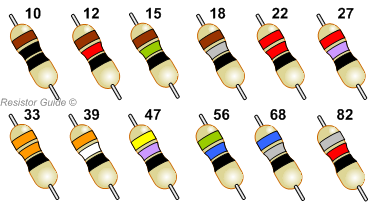 The E12 series of resistor values, including their color codes.

Resistors are available in numerous packages. When designing new circuits and PCBs it is important to know the exact dimensions of the components. The dimensions of the resistor body and the positioning of the leads are often standardized. The leading organization for these standards is JEDEC.