What Is Resistor Inductance?

Inductance is an electrical property of conductors by which an electrical current passing through the conductor induces an electromotive force in the conductor itself (self-inductance) and other conductors nearby. Since resistors are made of conductive materials, they, too, exhibit inductance as an unwanted, parasitic effect. This effect is especially noticeable if the resistor is made out of wire formed into a coil shape. Depending on the application, resistor inductance might be easily disregarded, especially in DC circuits. However, parasitic resistor inductance can be a significant factor in high-frequency AC applications. The reason for this is that the impedance of a resistor rises with the applied voltage frequency due to the increase in its reactance. 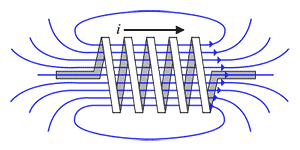 The B-field of an inductor coil

In AC circuits, electrical impedance is the measure of the opposition that a circuit presents to the passage of a current when a voltage is applied. It is given by the formula:

where ω is the angular frequency and L is the resistor’s parasitic inductance.

As can be seen from the above equations, the impedance of the resistor rises with the voltage frequency increase because the resistor acts as a resistor and inductor in series. This increase is usually negligible, but in some applications is quite significant.

Parasitic inductance usually manifests itself either in resistors with inferior properties such as helical wirewound resistors or in other resistors at very high frequencies. To demonstrate the high frequency problem, let's examine a typical foil resistor of 220 Ω with an inductance of 0.05 μH operating at 1 GHz.

The magnitude of the impedance can be calculated using the following equation:

Substituting our values we get:

The magnitude of the impedance is 383.5 Ω at 1 GHz, which is an increase of nearly 75% above the nominal DC value. An engineer would not expect this change if parasitic effects were not taken into account. Microwave and RF applications, in general, are particularly sensitive to parasitic effects.