In 1952, the IEC (International Electrotechnical Commission) decided to define the resistance and tolerance values into a norm, to ease the mass manufacturing of resistors. These are referred to as "preferred values" or "E-series", and they are published in standard IEC 60063:1963. These standard values are also valid for other components like capacitors, inductors and Zener diodes. The preferred values for resistors were established in 1952, but the concept of the geometric series was previously introduced by army engineer Renard in the 1870s.

The standardization of resistor values serves several important purposes. When manufacturers produce resistors with different resistance values, these end up approximately equally spaced on a logarithmic scale. This helps the supplier to limit the number of different values that have to be produced or kept in stock. By using standard values, resistors from different manufacturers are compatible for the same design, which is favorable for the electrical engineer.

Aside from the preferred values, many other standards related to resistors exist. Example include the standard sizes for resistors and the marking of resistors with color codes or numerical codes. Power ratings of resistors are not defined in a norm, and, therefore, often deviate from the above described series.

While the E12 series is the most common, other series are also available. It is a good practice to specify resistors from a low series when tolerance requirements are not high. The most common series are:

The E6 series has six values in each decade. The tolerance is ±20%.

The E12 series is probably the most common series and is available for almost every resistor type. The tolerance is ±10%. 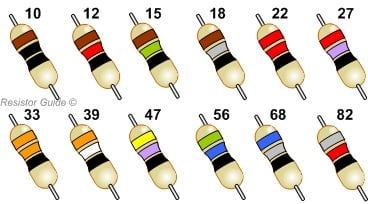 The E12 series resistors with their color codes

Each decade is divided into 48 values. A third significant digit is added (just as for the E96 and E192 series).