The company completed its EV cell pilot line earlier this month and will look to deliver full-scale batteries to its partners before the year is out.

In 2021, the top three vehicles sold in the United States were all beefy pickup trucks. And with big chassis come big tanks, which make for ranges in excess of 700 miles. 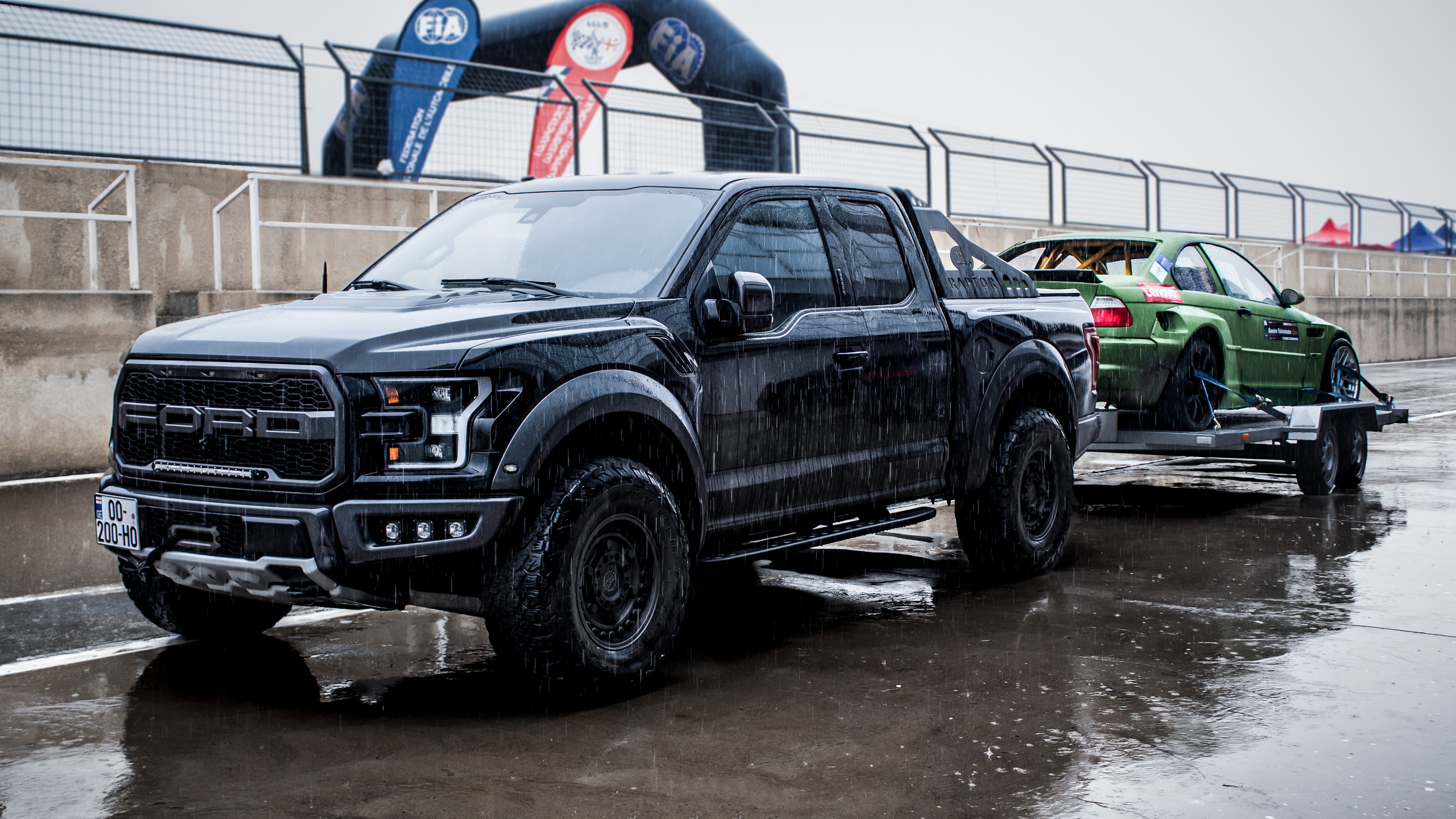 It’s no surprise then that electric vehicle (EV) range anxiety remains a top source of trepidation for American buyers, 44% of whom say they worry about the mileage provided by modern EVs' traditional lithium-ion (Li-ion) batteries.

Proposed solutions are abundant: Inductive and capacitive dynamic wireless power transfer, superdense metal-air chemistries, state-of-the-art aerodynamic bodies. But at scale, these are fledgling technologies at best and at worst are laughably expensive for the vast majority of consumers.

Enter Solid Power, whose solid-state cells sport anodes loaded with silicon and stabilized by a solid, sulfide-based electrolyte. Thanks to silicon's ability to absorb ten times the energy of graphite, the cells could lend EVs 500 miles of range on a single charge—and soon.

Earlier this month, the company put the finishing touches on its EV cell pilot line, where it will ramp up to a nameplate production capacity of 300 EV-scale solid-state batteries a week.

Though production at full capacity is set to be the company’s “next big challenge,” per Chief Operating Officer Derek Johnson, Solid Power appears to be on track to hit its targets.

With commercial units not expected until 2026, the company already plans to enter automotive qualification, as well as deliver its first models to partners—including BMW and Ford—by the end of the year. Should each proceed smoothly, Solid Power could have close to a three-year buffer to further scale, hone, and finalize its design before full manufacturing.

But getting there wasn’t exactly easy. In a blog post published in March, the company detailed its behind-the-scenes work to stay on schedule through a year in which the Covid-19 pandemic played havoc with global supply chains.

Expecting delays, the company placed orders early before sending its technical team around the world to meet directly with vendors. Closer to home, employees worked a series of “Jenga puzzle moves” to outfit Solid Power’s headquarters with a new dry room and multi-ton dehumidifier, which had to be lowered through a hole in the roof via crane. 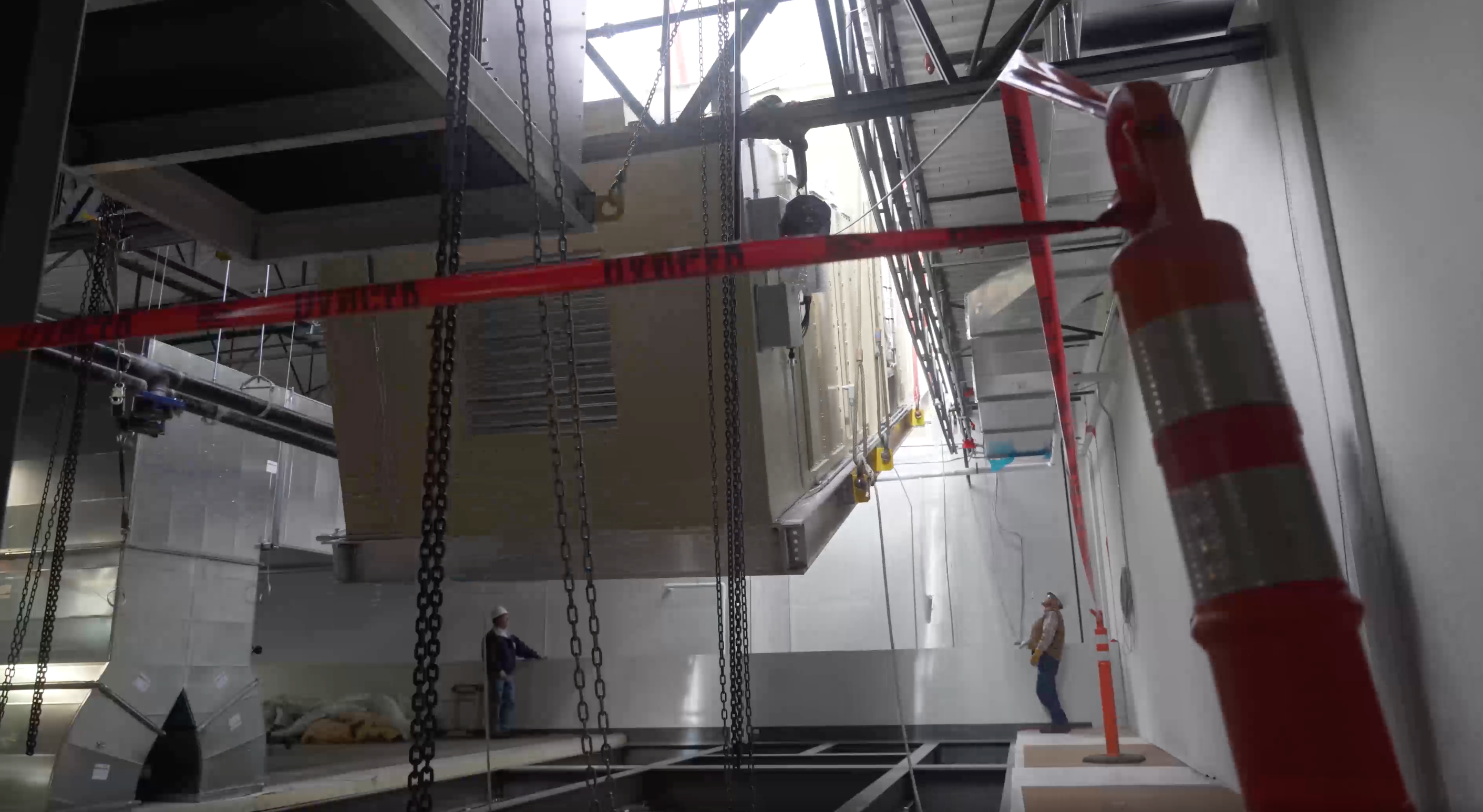 For background, semiconductor fabrication labs employ temperature and humidity-controlled dry rooms to establish superior environmental conditions for chip manufacturing. Dry rooms are themselves equipped with massive industrial dehumidifiers, which remove moisture from the air to protect electronics from water particles. In so doing, they help minimize defects in the manufacturing process.

In a press release announcing the line, Solid Power noted that it expects to have the flexibility to optimize its cell design for capacities ranging from 60 to 100 Ah, allowing for distinct design specifications from a variety of partners. 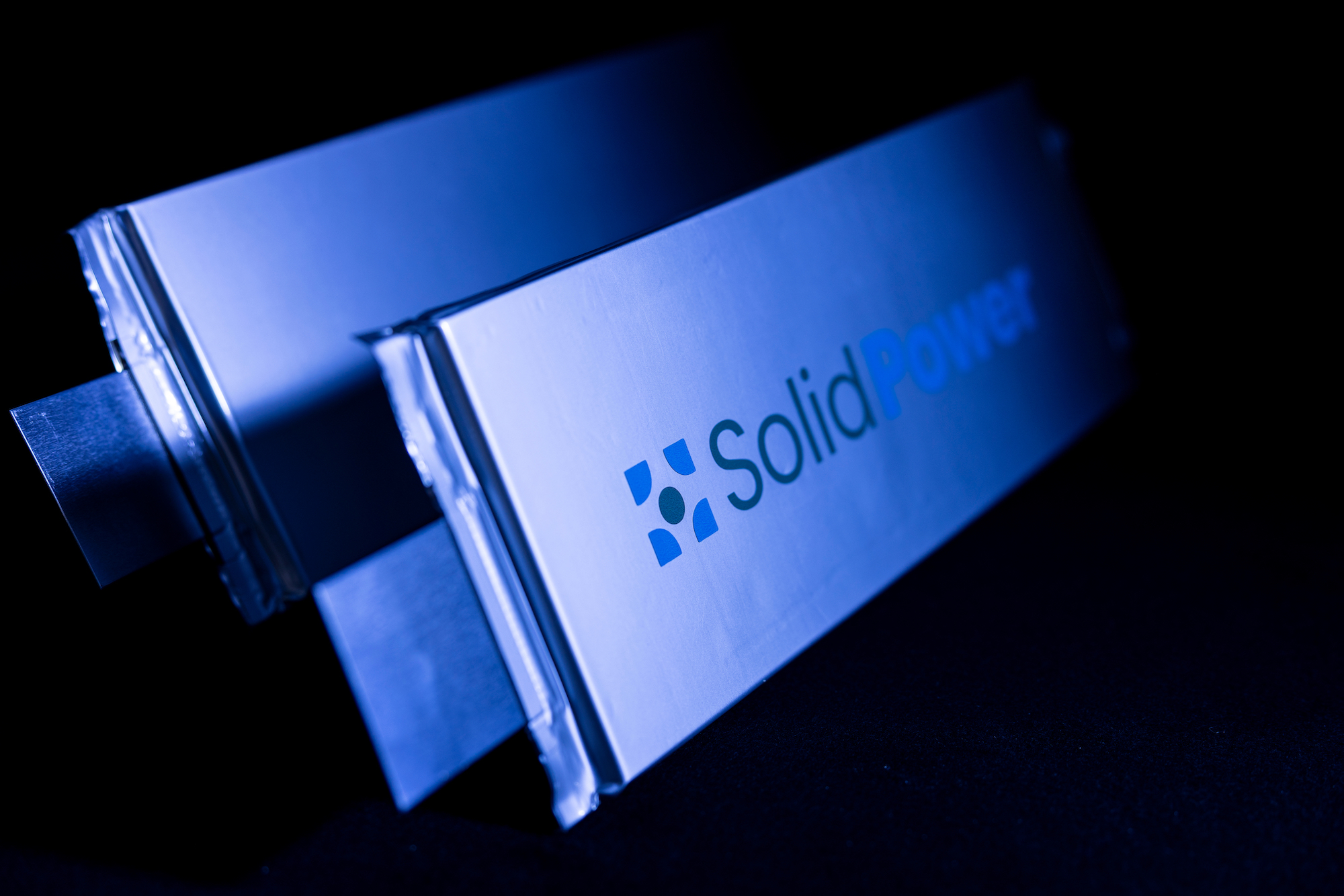 Solid Power expects to optimize its cell design for capacities ranging from 60 to 100 Ah. Image used courtesy of Solid Power

Within solid-state batteries is, naturally, a solid electrolyte, and this electrolyte is multi-layered. A single layer can hold approximately 0.2 Amp-hours (Ah), and the amount of time the battery can supply current is proportional to its charge/discharge current rating. For instance, a 70 Ah battery supplying 3.5 amps of current will hold for about 20 hours.

The company worked to develop a 20 Ah model last year, though its engineers were outdone by those of competitor Factorial Energy, which that April unveiled the industry’s first 40 Ah solid-state battery. Solid Power, with its initial silicon cell design consisting of 40 double-sided cathodes and 41 anodes, will now look to more than double that mark.

One tool helping it to do so will be a new automated stacking machine, which precisely cuts positive and negative electrodes to create a battery cell. Those cells are then balanced and stacked parallel to each other to create a larger cell. 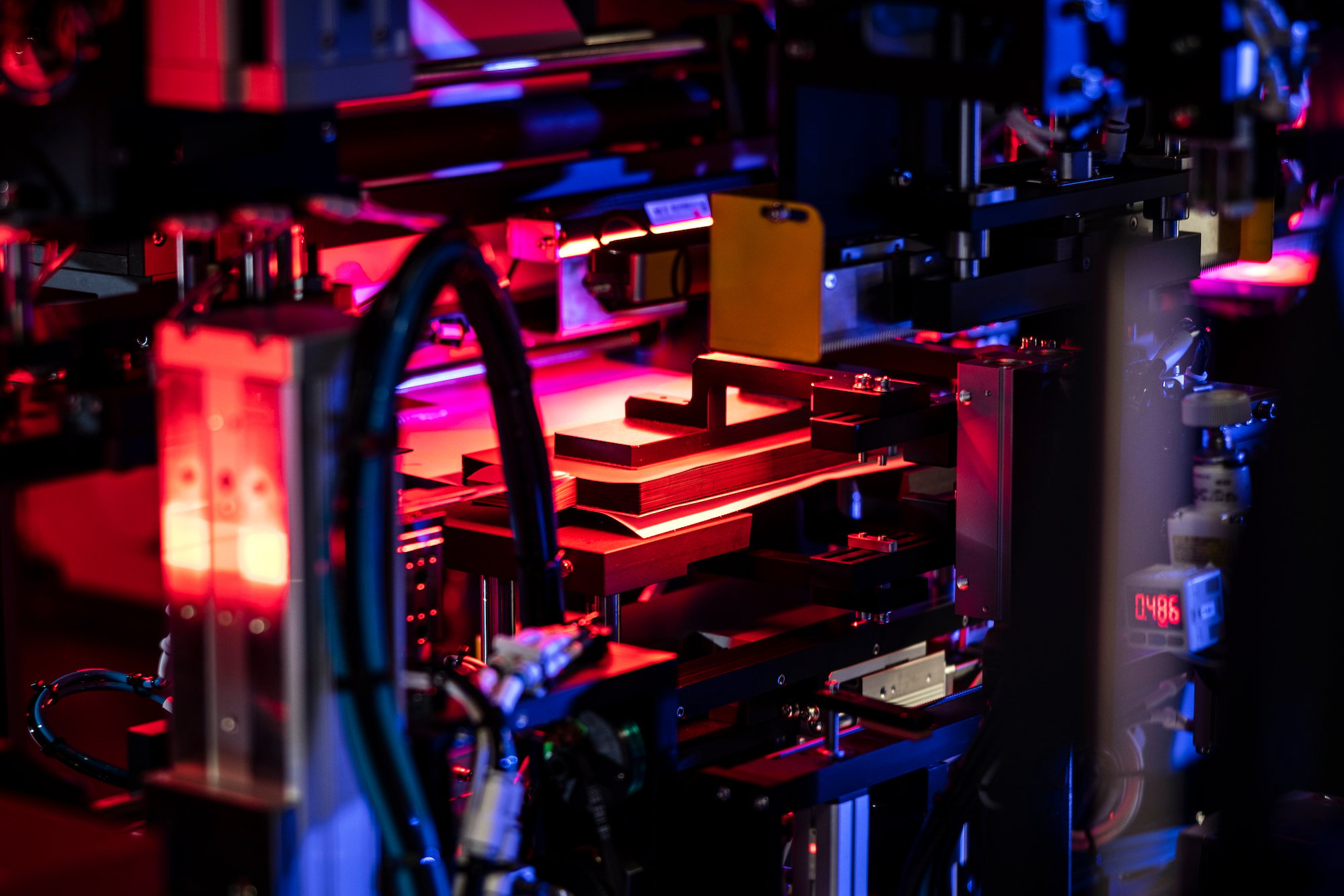 With robust funding across the sector, though, it might take more than sexy equipment to best opposing players.

Strong Backing Across a Busy Arena

With EV sales actually decreasing in 2019 and 2020 before a dynamic bounceback last year, investors have aggressively pursued silicon-minded startups looking to pioneer more energy-dense battery chemistries. Per market research firm IDTechEx, individuals and companies have spent more than $1.9 billion through 2021 to back novel players in the space.

Of course, a not-insignificant portion of that has gone to Solid Power itself.

Last May, the company announced the close of a $130 million Series B funding round led by partners BMW and Ford. That followed a $20 million Series A round in 2018, which saw involvement from Hyundai and Samsung, and preceded the company’s July SPAC merger with ​​Riverstone Holdings’ Decarbonization Plus Acquisition Corporation III, valued at the time at $1.2 billion. 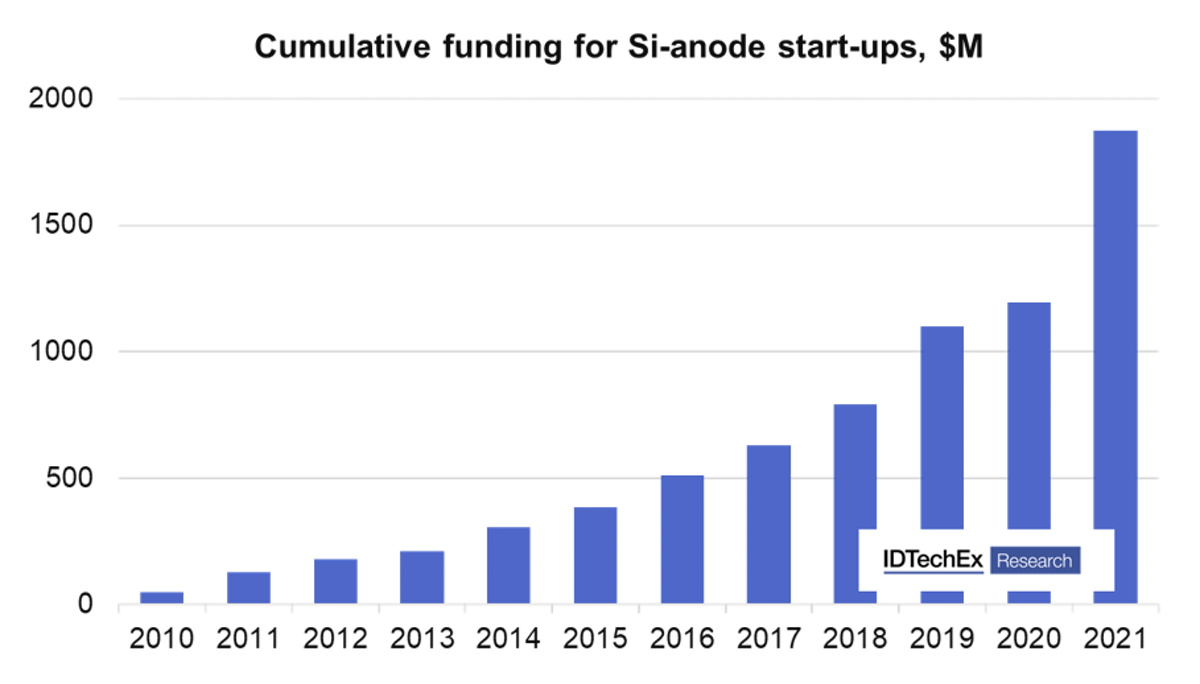 Still, Solid Power’s competition is far from lacking in resources.

Factorial, whose anodes are constructed of lithium metal rather than silicon and graphite, announced in January that it had raised $200 million in a Series D funding round led by Mercedes-Benz and Stellantis. The company partnered with each months earlier in November, striking joint agreements to further its research and development.

Also at play is San Jose-based QuantumScape, whose solid-state cells are bolstered by $200 million from Volkswagen. The company also completed its own SPAC merger in November 2020, resulting in a windfall of $680 million in net proceeds. Oh, and Bill Gates is a backer.