The Irresistible Potential, and Undeniable Challenge, of Metal-air Batteries

The Irresistible Potential, and Undeniable Challenge, of Metal-air Batteries

Metal-air batteries are one of numerous battery technologies that could improve current energy storage solutions. Still, there are many hurdles slowing down their commercialization, and researchers across the globe are trying to overcome them.

Given substantial growth in the demand for electric vehicles and other emerging technologies, researchers and engineers are training their focus on energy storage solutions, which are crucial in light of the naturally fluctuating supply of renewable energy sources such as wind and solar.

The efficiency of those solutions depends on their storage capacity, ease of recharging, and rate of discharge, among others. Right now, lithium-ion (Li-ion) batteries dominate the sector, but promising candidates might one day replace them. One such candidate is the metal-air battery.

Metal-air batteries have significantly greater energy density than Li-ion batteries. Lithium-air (Li-air) batteries, for instance, are 100 times more energy-dense than their Li-ion brethren. That kind of magnitude difference makes metal-air batteries mouthwatering for potential use in EVs and grid storage. That said, there are a number of challenges inherent to the technology that make viable development difficult.

Let’s delve into why, and take a look at researchers’ recent progress.

The Mechanics of a Metal-air Battery

Like conventional batteries, a metal-air battery comprises an anode, a cathode, an electrolyte, and a separator between the two electrodes. Metal-air anodes are composed of metals such as lithium, sodium, iron, zinc or other elements. Their cathodes are porous materials, and an electrolyte can be aqueous or non-aqueous depending on the material makeup of the anode. 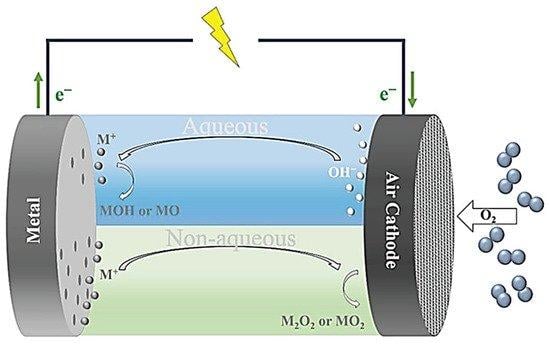 The contstruction of a metal-air battery. Image used courtesy of Energies

In metal-air batteries, the metal dissolves in the electrolyte to produce ions at the anode, and the oxygen transforms into hydroxide ions at the cathode. During the charging operation, this process reverses. This is opposite to the operation of conventional batteries, in which metal ions travel from anode to cathode.

Though their high energy density makes metal-air batteries attractive for use in numerous applications, there are challenges associated with the metal anode, air cathode, and electrolyte.

Chief among them is corrosion of the metal anode via dendrite formation. Dendrites form when extra metal ions accumulate on the anode surface and can not be absorbed in time. These dendrites can short two electrodes and, over time, cause catastrophic failures. In laboratory tests, Li-air batteries exhibit high energy density and high open-circuit voltage but fail after just a few cycles, due to corrosion.

Dendrite formation on the anode of a zinc-air battery. Image used courtesy of Acta Materialia

There are still further challenges related to electrolyte conductivity, and the stability of the air catalyst in the cathode. To unlock the full potential of metal-air batteries, researchers across the globe are digging into these and other issues. Below are a few recent developments.

Researchers from Japan’s National Institute of Materials Science have developed an Li-air battery with an energy density of more than 500 Wh/kg, which is almost double that of the 260 Wh/kg Li-ion battery used in the Tesla Model 3.

Key to this high density was the research team’s stacked cell configuration, which incorporated a gas diffusion layer. The whole cell measures 4 cm x 5 cm, with single-layered cell electrodes measuring just 2 cm x 2 cm. What’s more, the team notes that by increasing the number of stacked layers and enlarging the electrodes, their design can easily scale.

Beyond its high energy density, NIMS claims that the team’s battery boasts one of the longest life cycles ever achieved, based on surveys conducted by the institute.

A research team from MIT, Harvard, and Cornell University have discovered a method to physically encapsulate one of the key components of Li-air batteries — lithium superoxide.

An important byproduct of Li-air batteries, lithium superoxide plays a crucial role in the Li-air lifecycle. The compound is produced during cell cycling, and reacts to form lithium peroxide, which is key to battery storage. But at room temperature, it is short-lived and highly unstable, making it difficult for scientists to capture and further study.

Here, the researchers isolated lithium superoxide by using a shell made of quinone, a molecule used as an energy carrier in biology.

Stabilizing the compound in this way will allow scientists to gain insight into the the energy storage unit of Li-air batteries, said Matthew Nava, the lead author of the team’s paper, published in Proceedings of the National Academy of Sciences.

With emerging battery technology set to play a critical role in the future of clean energy, research initiatives such as these will prove vital to unlocking the path forward.