According to a study from Accenture, 95% of the 150 Utility Executives surveyed agree that the risk of electricity consumers going mainly off the grid and only using it as an occasional backup will increase significantly in the next two years. Accenture conducted the study as part of the company's Digitally Enabled Grid research program.

The deployment of distributed generation (DG) technologies such as rooftop solar is increasing faster than utilities can build new grid capacity to handle it in high-demand areas, according to the vast majority (95%) of the 150 executives surveyed across 25 countries. The study found that almost half (48%) of the respondents said that parts of their grid will reach maximum capacity in three years or less, with only 1 percent believing it will take longer than five years.

Commercial and Residential Consumers with Rooftop Photovoltatics Could Exceed 15%

By 2036, the proportion of both residential and commercial consumers with rooftop solar photovoltaics could even exceed 15 percent by 2036 in some markets, such as California, according to the modeled markets. Accenture says that this trend will likely continue to affect net electricity demand growth for the foreseeable future. 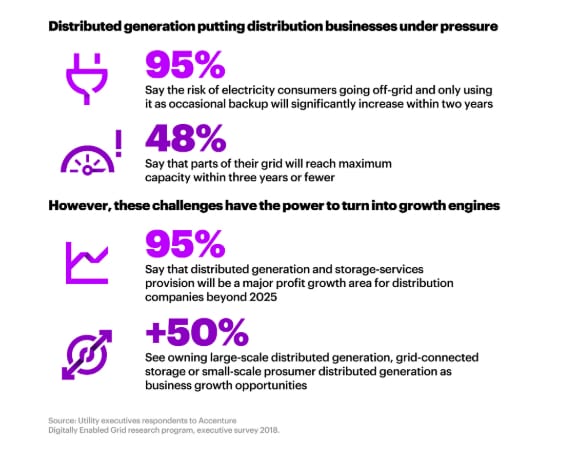 According to Accenture modeling, just having utilities better identify local distribution network constraints would help some markets generate substantial capital reinforcement cost savings. For example, according to the modeling, a 10% improved accuracy in DG forecasts, resulted in projected savings ranging from 15% to 28% in New York, 14% to 18% in California, 14% to 15% in Australia, and 11% to 12% in both the United Kingdom and the Netherlands.

Furthermore, DG integration was ranked as the second-highest priority area as a cost-saving opportunity, selected by 59% of respondents as one of their top-5 choices. The top priority, chosen by 61% of respondents, was reducing supply chain unit costs through the use of improved forecasting of materials and service requirements.

"Distribution businesses have had a tough time in recent years with weak demand, which is one reason why grid operators' profits have been squeezed," said Stephanie Jamison, a managing director at Accenture who leads its Transmission and Distribution business. "The proliferation of DG changes electricity demand profiles, potentially diminishing total demand without necessarily reducing peak demand. Successful DG integration will require substantial investments in new connections and grid reinforcement to modernize the network and sustain the same level of reliability and safety and secure operations."

While DG presents a challenge to distribution utilities, it's also seen as an opportunity, with 95% of respondents saying that DG and storage-services provision will be a major profit growth area for distribution companies beyond 2025. More than half of respondents globally also identified owning each of the following assets as an opportunity for their business going forward: large-scale DG; grid-connected storage; small-scale prosumer DG; and community storage.

Accenture modeling predicts that, following a period of stagnation, electricity demand could grow by 31% between 2026 and 2036. The study and modeling partly attribute the growth to the significant impact that electric vehicles (EVs) and building heating electrification will have on demand growth beginning around 2025.

The modeling forecasts that the total percentage of plug-in electric vehicles in the overall vehicle stock will grow relatively slowly, from 1% this year to 3% by 2025, but could rise to 37 percent by 2040, led by municipal buses, scooters, and small commercial vehicles.

Moreover, this trend could translate to substantial new electricity demand. Indeed, while the electricity consumption of EVs is expected to represent just over 1% of the annual peak demand hour by 2025, it is forecast to rise almost fourfold in the markets modelled by 2040, to 4%. In some markets such as France and California, forecasts are even higher by that year (10% and 8%, respectively).

The decarbonization of buildings is also expected to drive up electricity demand in the long term, with 96% utility executives agreeing that decarbonization efforts will substantially reduce residential and commercial natural gas demand by 2040.

Also, the combined effects of transport and heating electrification could push peak demand up significantly, with Accenture modeling suggesting that the average electricity consumption during the peak demand hour could increase by around 63% from 2016 to 2040.

"Mass adoption of electric vehicles and the electrification of building heating is poised to alter demand growth and load shape in the longer term," Jamison said. "This suggests high growth potential for utility distributors, but it will also put pressure on grid stability. The key will be to navigate this disruption by making the grid more resilient through greater use of smart technologies and utilizing all sources of flexibility including on the demand side, adopting a more customer-centric approach."