The latest addition to Efficient Power Conversion’s (EPC) line of rad-hardened devices features a maximum RDS(ON) of 25 mΩ and 20 A of continuous drain current.

The EPC7007 is aimed at tough spaceborne and other critical environments, as well as other use cases, where resistance to radiation and high reliability are essential. It features a typical RDS(ON) of only 17 mΩ. 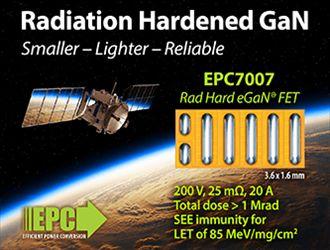 The radiation-hardened EPC7007 has a footprint of only 5.76 mm2. Image used courtesy of EPC

The EPC7007 is specified by EPC as having a total dose rating more than 1 Mrad. It will also maintain its specifications under the bombardment of up to 3 x 1015 neutrons/cm2.

The company also specifies a SEE immunity for LET of 85 MeV/(mg/cm2). By way of explanation, the European Space Components Information Exchange System, defines “SEE” as standing for single events effects. LET is defined as “the electronic stopping power divided by the mass density of the absorber medium, i.e., the mass electronic stopping power. LET is expressed in units of MeV/(mg/cm2) or MeV.cm2/mg.”

“The EPC7007 offers designers a solution with a figure of merit that is 50 times better than best-in-class silicon (Si) rad-hard devices,” claimed Alex Lidow, CEO, and co-founder of EPC.

The company also claims that when compared to Si devices with similar RDS(ON)s, the EPC7007 is 40 times smaller, with total gate charge (Qg) and gate to drain charge (QGD) both also 40 times smaller. Significantly, well reverse recovery (Qrr) is zero. EPC is active in the field of rad-hard FETs, with offerings that include the EPC7091G, the EPC7014, and the FPG series.