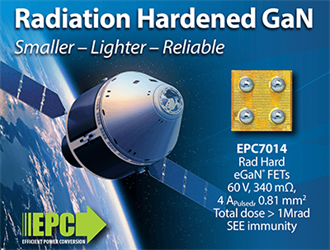 The company has announced that members of the new rad-hard family will be available in chip-scale packages, as do members of EPC’s commercial eGaN FET and IC family.  Packaged versions are available from EPC Space.

As per Alex Lidow, CEO, and co-founder of EPC “EPC’s GaN technology enables a new generation of power conversion and motor drives in space operating at higher frequencies, higher efficiencies, and greater power densities than ever achievable before.” He goes on to state that, “We are excited about this technology's ability to provide mission-critical components to the space and high-reliability markets”.

Due to their structure, eGaNs are resistant to single event effects (SEE). This is largely due to the absence of the layers, such as those that exist in MOSFETs, that can trap stray charges between them. Those same layers then provide a ready pathway through which the captured charge can travel to destroy semiconductor structure. Additionally, eGaNs don’t have a metal oxide layer, which can be a source of charge capture. This prevents build up of the total ionizing dose (TID)

This is a very active area of R&D, and the players are keeping their cards close to the vest. The basic takeaway is that, because of their most basic structural nature, eGaNs have some “natural immunity” to radiation, and refinements in the fabrication process will lead to better and better results.

Complete specifications for the EPC7014 can be found in the datasheet