Electrified powertrains differ from conventional powertrains in terms of onboard vehicle power paths and transmission configurations. This helps integrate several electric power systems like power electronics, electric machines, battery packs, and control units into vehicle platforms. In general, the electrified powertrain architecture, along with the design and control of the powertrain components and software development, facilitates an efficient, high-performance, and reliable powertrain. The efficiency and performance of electric machines significantly impact fuel consumption, acceleration, high-speed performance, and driving comfort [2].

The power converters employed in electrified propulsion systems are different depending on the powertrain. A typical architecture for the electrified propulsion system is shown in Figure 1 [2]. In some configurations like the one illustrated in this figure, a DC-DC boost converter is used between the battery pack and the drive system to step up the voltage. This configuration offers higher flexibility for selecting the voltage rating of the battery pack and the motor as well as for controlling the system [3]. However, this demands the development and implementation of an additional converter which means additional cost and complexity. 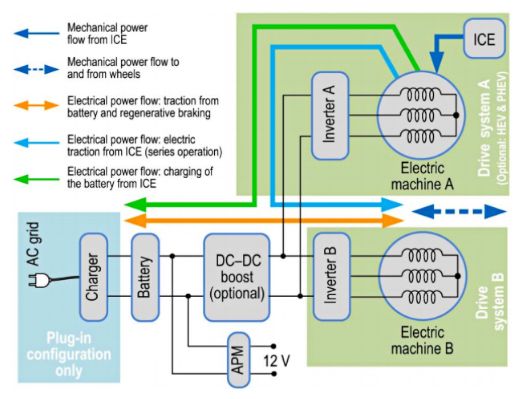 Parallel hybrids configuration is one of the most widely used architectures [2]. It offers a simple yet effective fuel-saving powertrain design and thus has been the powertrain of choice for many auto manufacturers. This typically forms the first step into vehicle electrification. Several auto brands have released hybrid models based on this configuration, and these consist of an electric machine placed in parallel with the conventional internal combustion engine. The machine thus supports the traditional engine by providing assistance for greater acceleration or performance when in need. It also supports vehicle deceleration by providing regenerative braking. Furthermore, It provides the auto-start function to crank the engine while generating power for the auxiliary loads in case of mild hybrids and integrated motor assist configurations.

The vehicles with the next higher degree of electrification are the full hybrid powertrains. There are many architectural varieties of this configuration that have evolved with great commercial success. Power-split systems are incorporated such that the planetary gear sets housed at the input side of the transmission connect the engine and electric machines. This facilitates the splitting of engine power into different mechanical and electric power ratios, thus achieving variable transmission output speed and torque [2]. Two-mode hybrid is another configuration that incorporates the engine, electric machines, and mechanical gear sets in a compound two-mode hybrid system while offering a higher number of operating modes. The other alternative architecture is a series-parallel hybrid model that uses a direct mechanical connection to split the transmission power flow instead of using planetary gear sets. Here, one electric machine is always connected to the engine to function as both a starter motor and a generator. The other electric machine acts as the main traction motor separated from the engine and generator by a clutch, which enables multiple modes of operation. The modes include series operation, series-parallel operation, and electric-only operation.

Plug-in hybrid EVs contain an even higher degree of electrification as they are equipped with larger battery capabilities. This enables operation on battery power alone for a considerable range, and they can be charged directly from the grid. Here, conventional engines are employed to provide power assistance or are used as the secondary power source. Based on the state of charge of the energy storage system, charge depleting, charge-sustaining, and all electric driving modes are available [2].

EV powertrains are known to employ the simplest and the highest electrification level. Here, the electric machine directly drives the wheels via a fixed gear reduction, thus achieving reduced emissions and the highest degrees of fuel displacement. This also requires significantly less mechanical maintenance as compared to conventional vehicle powertrains. Thus, this architecture achieves the highest fuel economy gains with the lowest powertrain complexity. Batteries with high energy and power densities, along with fast recharging time and long-lasting life cycles, are desired in this case [2].