Understanding the Role of Uncertainty in PV Energy Production

Understanding the Role of Uncertainty in PV Energy Production

This article discusses the main sources of uncertainty in PV production, how to assess the overall uncertainty, and how this uncertainty affects production estimation.

Energy yield estimation is one of the main factors in evaluating the long-term investments associated with PV systems.

Uncertainty plays an important role in PV energy production. This article will show the main sources of uncertainty in PV plants energy yield estimation, how to assess the overall uncertainty and how this uncertainty affects the estimation.

The main source of uncertainty for solar systems is the energy resource. There are several databases that provide satellite data with accuracy and with historical time series. However, all of them have uncertainty in the data they provide, which is the result of several factors (satellite acquisition, data processing, interpolation models, etc.).

We can summarize this uncertainty in two points:

Direct measurements on site can be used to reduce the uncertainty of the long-term databases and increase the reliability of the estimation.

Usually, energy yield calculations are performed by using dedicated tools or software (ie.: PVGIS, PVsyst, etc) which have an uncertainty associated with the simulation model itself. These kinds of software typically provide information about their accuracy and validation of the model based on comparison with real plants.

Uncertainties at the Plant Level

Finally, several design choices cannot be done in a perfect precise way, so they imply an uncertainty on the assumptions taken. The considered components have an impact on the energy yield due to specific features they have, which cannot be determined in an absolute way.

For example, the PV modules have specific tolerances on the parameters declared by the manufacturer (voltage, current, power, thermal behavior, etc.). The final performance can differ from the expected performance according to these tolerances.

Another example can be the internal availability of the plant, usually done based on historical data from similar plants with similar components, if available, or estimated by the design engineers according to the project features.

One more example could be the estimation of the losses associated with dust and dirt that can accumulate on solar panels, that is not so easy and it’s really variable according to site conditions.

All these uncertainty sources have to be combined, in order to define the overall uncertainty.

For our purposes, we can assume that the above uncertainties are independent of one another. And this would lead to the following propagation law, where uis the uncertainty. 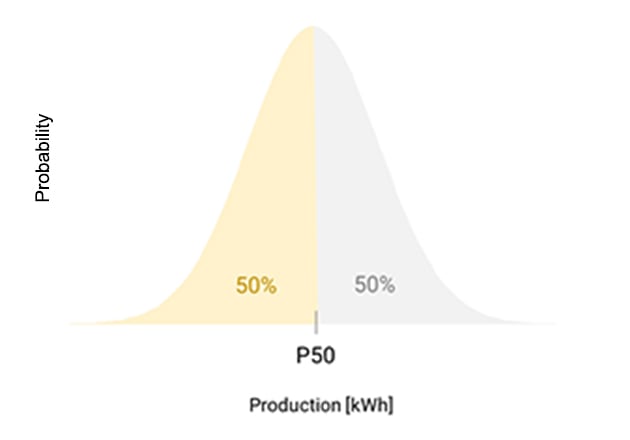 Figure 1 shows a normal distribution with the indication of P50 as probability of exceedance, which represents the value that has the 50% of probability to be exceeded.

P50 represents the center value, the mean value, of the distribution and is the most probable value to be reached.  It’s possible to define probability of exceedance from P1 to P99 and in general each Pxx represents the value which has an xx% of probability being exceeded.

It is important to link the uncertainty with the distribution mentioned above, in order to understand how the uncertainty value affects that distribution. For solar energy applications, the uncertainty is assumed to be expressed in the terms of the standard deviation (σ), which corresponds approximately to an interval of 68.27% of occurrences around the mean value (P50). 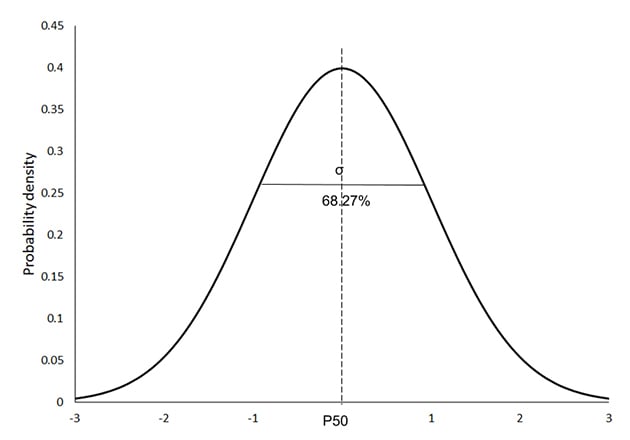 If the uncertainty changes, the shape of the distribution will change, as indicated in Figure 3 where 3 different values of uncertainties are considered. 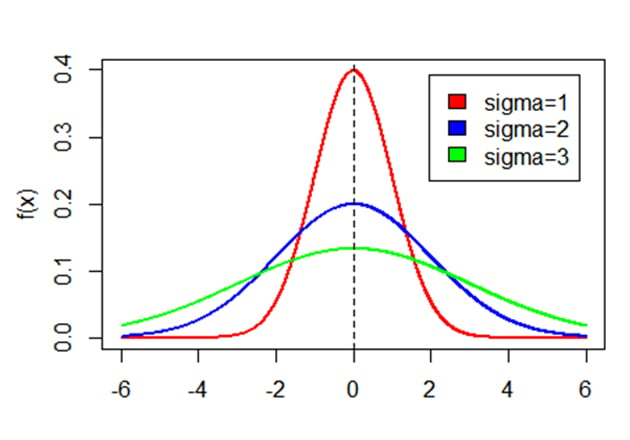 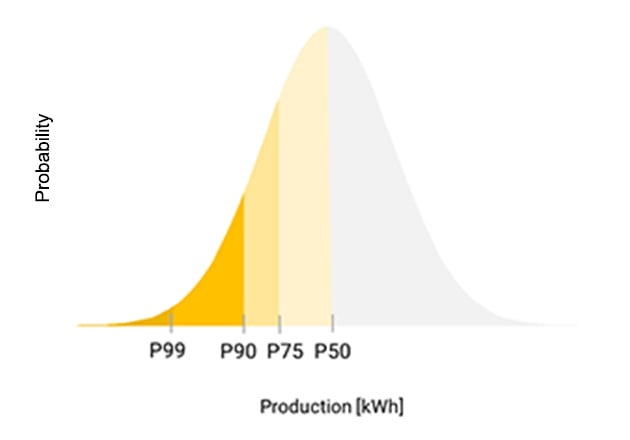 Uncertainty does not just impact the reliability of the energy yield estimation for design purposes or economical models. The probability of exceedance values like P99, P95, or P90 are common in project financing, as they are usually the reference values first considered because they represent conservative values of energy yield that will be reached with a very high probability.