This article is mainly discussing the functioning and the benefits of Trench Schottky rectifiers.

Named after the German physicist Walter Hans Schottky, the Schottky diode consists mainly of a metal-semiconductor interface. Because of its low forward voltage drop and its high switching speed, it is widely used in a variety of applications, such as in power conversion circuits as a boost diode. The electrical performance of a Schottky diode is, of course, subject to physical trade-offs – between the forward voltage drop, the leakage current and the reverse blocking voltage.

However, there is a trade-off between the forward voltage drop across the junction and the leakage current of the Schottky rectifier, as the level of the leakage current is also determined by the Schottky barrier and the electrical field across the metal-semiconductor interface. In addition to this trade-off, the advantage of a low voltage drop across the junction can disappear when the thickness of the drift region is further increased in order to achieve a high reverse blocking voltage. This is the reason why the reverse blocking voltage of Schottky rectifiers is traditionally limited to well below 200V. 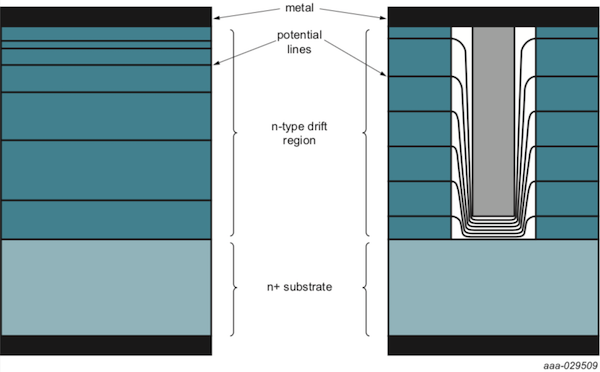 Given this explanation, one might ask how can the major advantage of Schottky rectifiers - i.e. a low voltage drop across the metal-semiconductor interface - be preserved despite the demand for a low leakage current and a high reverse blocking voltage? Here, Trench rectifiers prove very useful.

The concept behind the Trench Schottky rectifier is termed ‘RESURF’ (reduced surface field). The RESURF effect is illustrated in Figure 1. In a planar Schottky rectifier the equipotential lines are crowded near the top electrode resulting in a high electrical field near the surface. This results in a strong increase of the leakage current with increasing reverse voltage, and an early breakdown when the critical electrical field is exceeded near the surface. By etching trenches into the silicon and filling them with polysilicon – electrically separated from the drift region by a thin dielectric – the trenches act as a kind of field plate in the semiconductor, depleting the drift region in the reverse direction and resulting in a flattened electrical field profile along the drift region. Therefore, the trench concept achieves a lower leakage current by relaxing the electrical field near the surface and producing a higher breakdown voltage compared to a planar device with the same epitaxial structure. 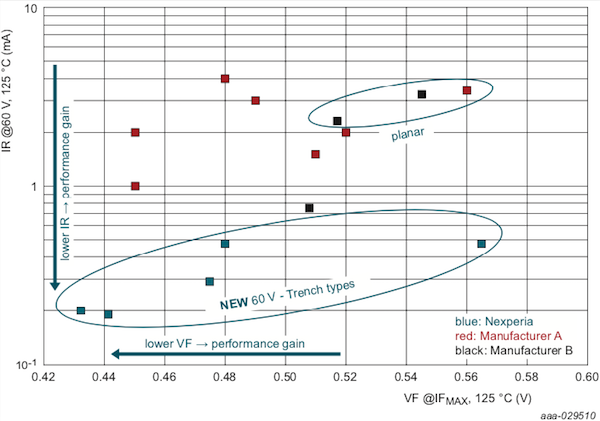 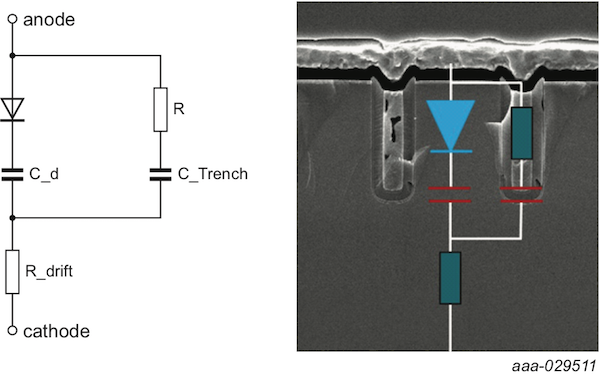 Figure 3: Equivalent circuit diagram of a Trench Schottky rectifier. The circuit elements are highlighted in the device cross section.

The equivalent circuit diagram also manifests itself in the switching behavior of the device, which is characterized by reverse recovery measurements. Such measurements are carried out by biasing the rectifier in a forward direction, then switching the device into a reverse condition. Due to the stored charge in the device (represented by the parasitic capacitance in the equivalent circuit) which must be first removed before the diode blocks, a so-called reverse recovery current of the rectifier occurs. 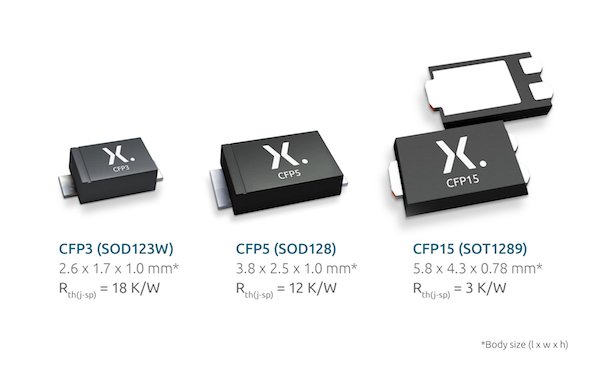 In summary, the following can be stated from an applications standpoint: Trench rectifiers are the correct choice if a better trade-off between forward voltage drop and the leakage current is required, provided that the application can tolerate the higher parasitic capacitance. At the same time, the additional RC element in the equivalent circuit helps to suppress potential ringing during the switching of the device making Trench rectifiers the preferred choice in EMC-sensitive applications. Trench rectifiers should also be selected in high power density applications where the ambient temperature is elevated since they are more robust against thermal runaway effects.

Reza Behtash received his diploma degree in electrical engineering in 1999 from the Technical University of Hamburg. He then spent four years as a research fellow at DaimlerChrysler research institute in Ulm working on GaN HEMTs and MMICs, and subsequently received his PhD from the Ulm University. Reza continued working on GaN technologies for power amplifiers while at the Ferdinand-Braun-Institut für Höchstfrequenztechnik in Berlin and during his time at United Monolithic Semiconductors (UMS). For the past eight years, as part of the Application Marketing team of Nexperia in Hamburg, his main focus has been on discrete planar and Trench Schottky rectifiers in automotive applications.