The Benefits of Bi-Directional Power Design

The Benefits of Bi-Directional Power Design

The power system designer of just a few years ago might have wished for the means of simply transforming one DC voltage to another; today, that wish is fulfilled and the “DC transformer” is a reality. Even more design freedom follows on the realisation that power flow through selected families of such devices can be fully reversible – they are bi-directional.

Before looking at some of the new ways that the abilities of these components can be put to work, it’s worth taking a moment to consider how a small shift in perspective may inspire novel product concepts and circuit configurations. We are accustomed to a left-to-right paradigm: we habitually see, and draw, diagrams in which signals progress from source to destination, sensor to output transducer, across the page in that direction. Power, too, commonly makes its way from source to load, left to right across the sheet. It is natural to think of power conversion components and sub-systems as conforming to this convention, and being uni-directional. For most of the history of power electronics, this has been broadly true.  An obvious exception being the conventional AC transformer.

The SAC: a symmetrical converter

Modular components now available to the designer provide two key attributes; they are available as effective and efficient “DC transformers” - that is, they provide a fixed-ratio DC-DC conversion: and, they are inherently bi-directional. A detailed description of how bi-directional operation is achieved is beyond the scope of this short article; but a “broad-brush” understanding can be gained by looking at the main elements of the Sine Amplitude Converter, which is the core enabling technology. As we have abandoned left-to-right thinking, start in the centre, where there is a transformer, and a series capacitor that is maintained in resonance with the transformer’s leakage inductance. To one side there is a switching bridge that (conventionally) would be viewed as an input stage chopping a DC bus, and to the other, an essentially identical arrangement that might be termed a synchronous rectifier. As long as those two paths switch synchronously with the resonant waveform in the central “tank”, the whole device is symmetrical, and acts exactly as a DC transformer; voltage is stepped up according to the turns ratio of the magnetics, and current stepped down – or vice-versa. Changes in impedance presented at one port are reflected (by the square of the turns ratio, as expected) at the other, and power will flow accordingly. Resonant, zero-voltage and zero-current switching ensures low losses: minimal stored energy in the resonant tank yields good transient response through the converter: MHz switching means small and light inductors and capacitors.

Although the SAC topology in inherently bi-directional, two families of power components are particularly useful for bi-directional applications. One is the Bus Converter Module, or BCM, that offers isolated fixed ratio conversion between two voltage rails. The other is a non-isolated version (known as NBM) that is otherwise similar. The latter part is slightly easier to use in a bi-directional setting, as it will “start” (establish and stabilise resonant switching) from power applied to either port. If isolation is necessary, using the BCM necessitates a small amount of additional circuitry to provide the bias to start it from power applied to the “secondary”.

Efficient bi-directional power conversion can be applied to a range of different scenarios, that can be grouped together in a number of general divisions, as shown in Figure 2.  The converter (isolated or not) can operate in its forward direction – conventionally a step-down, such as 48 V to 12 V: or in reverse, as a step-up. It can at different instants operate in either direction; or, in the fourth case, twin units can act as a mirror pair; two identical units connected back-to-back. 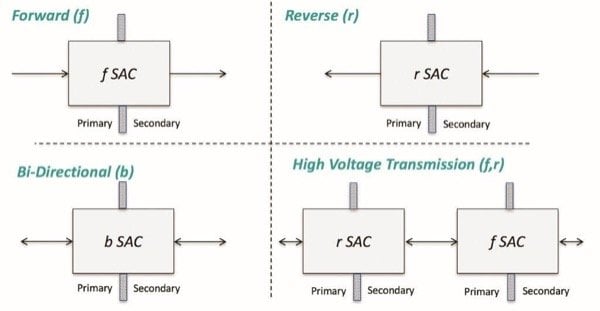 Renewable energy is providing the stimulus for the development of many potential applications. Until recently, the default use of photovoltaic panels has been as grid-connected arrays, feeding power via an inverter, back to the electricity supply utility to offset or even reverse the flow of power to (from) a property or installation. Rapidly gaining ground is the notion of isolated (that is, not grid-connected) solar-power arrays feeding local storage for consumption on the local “micro grid”. Hand-in-hand with that is the resurgence in the concept of DC power distribution on a building-wide (or even wider) scale. 380 V is commonly proposed for such a bus and, as the high-side voltage, this is a level that can be accommodated today by modules from the BCM/NBM families.

Figure 3 shows the generic case of such an installation, in which multiple DC loads are supplied from a range of renewable sources, using a battery bank as a back-up. The back-up battery, and the electro-mechanical flywheel would be examples where bi-directional power flow would be required. Differing voltage rails on both the supply (or storage) side can be accommodated simply by selecting the appropriate conversion-ratio module from the range available. On the consumer side of this picture, it might be that LED lighting would operate from a lower voltage than the main DC distribution. Once again, a suitable step-down (“reverse”) converter module could take care of the transition. An experimental configuration documented by Vicor has applied such a structure with device-by-device power distribution implemented through a 24V bus using intelligent USB-C connectors which, in the latest specification, are capable of supporting 100W. 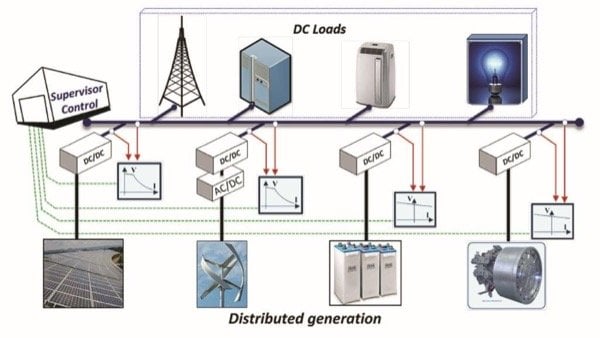 The block diagram in Figure 4 shows what is, in effect, a special case of energy storage at a different potential (e.g. 12V) to the equipment being powered (48V). A 5:1 conversion takes place through the NBM module; regulation is always at the high side. The battery voltage is stepped up, then regulated to the required level; or for charging, the higher bus voltage is regulated such that the 5:1 down conversion yields correct charging level. Figure 4, in fact, depicts a new piece of test equipment for power supply labs that can provide both a regulated test voltage to a product and provide a regulated load, recycling the energy so that only a small fraction used for test is provided by the grid. The traditional approach to this problem would be to provide twin power paths; step-down (and regulation) to charge the battery, step-up to return power to the 48 V bus when primary power fails. In addition to the power conversion functions, this would also entail some element of control, with safety lock-outs, to switch from one state to the other.  Using the bi-directional system components makes for a simpler, more compact solution. However, as noted above, regulation is not presently available in bi-directional modules, so some power-path re-routing is required to make use of the single regulator in both directions.

An exact analogy of power utility grid and super-grid practice is found in the fourth case in Figure 2. In this, a converter is connected in the step-up direction to transmit power at a higher voltage over some distance, followed by an identical unit connected to step-down, at the far end. The objective being, of course, to reduce I²R losses in the intervening cabling. Just as the utilities transform their AC to hundreds of kV for transmission, the engineer designing DC distribution can use the DC-transformer to the same end. While this employs the reversibility of the NBM modules, power flow in such a scenario might or might not be bi-directional.

One unusual case where this strategy has been employed is that of the tethered drone or UAV (unmanned aerial vehicle). Not all drones need to free-fly, but may need extended operation (to conduct site surveys, or architectural photography, for example). Power can be fed to such machines along an umbilical, or tether. Clearly, it is desirable that the weight saved in on-board batteries should not be cancelled by weight of cabling – therefore, a thin gauge power feed is indicated. A case study modelled at Vicor used a 50 V on-board motor supply, but stepped this up to 400V with an 8:1 converter so that thin wire with a 2 Ω loop resistance was tolerable.

The rapidly-developing field of electric vehicles and hybrids looks set to provide many more applications where bi-directional power flows between disparate DC buses will prove useful. Dual-voltage vehicle architectures at the low level (12 V and 48 V) call for, depending on whether they are mild-, medium- or full-hybrids, a range of interconnections of buses, and power flows between battery and units such as integrated starter/generators.  To which the hundreds-of-Volts traction power rails of the full EV only adds further complexity, and brings the technology into the sphere of regenerative braking and energy recovery.

All of these cases can be modelled using Vicor’s online PowerBench Whiteboard tool. This has comprehensive “black-box” behavioural models of NBM converter modules at its disposal. The parameters of a real-world application can be quickly entered, and the software is fully prepared for forward or reverse converter operation. An accurate prediction of real-world voltages, currents and losses both within the converters and eternally, is immediately available. Parallel connection of modules is supported, and works equally well in the bi-directional case. Power handling from 200 W up to as much as 20 kW is feasible using modules with bi-directional capability, with voltage ratings that extend to over 400 V.

On learning of the availability of bi-directional power conversion components, many engineers will immediately think of straightforward applications such as the back-up battery/reserve power cases outlined above.  But, just as setting aside left-to-right thinking might help understanding some of the principles, engineers can look further afield for opportunities to use this approach. Study a system diagram; is there energy storage and energy recovery?  If so, that is an opportunity for these bi-directional products. It’s not just electrical energy: it could be kinetic energy (as with an electric or hybrid-electric car), potential energy, or any other form of energy that can be converted to electricity. Power designers need to look beyond power chains and ask how they can use this approach to improve their system.