This article offers a solution to improve motor drive's package density to reduce the production costs and better design and flexibility.

"Smaller, more flexible – and more powerful." Technological development follows the same mantra in all areas of application from mobile phones and computers to any kind of machine operated device. The world of electric mobility, be it in the format of battery electric vehicles or hybrid cars, is no exception – for good reason.

The planet is overheating and OEMs within the car industry are facing legislation to lower their CO2 impact. Electric cars or hybrid models have been available to the market for years, but still only account for 3-4% of the entire fleet worldwide. Technologies are immature and only a small minority of end-users are prepared to pay more to reduce their footprint. To make the electric or hybrid models more attractive to consumers, car manufacturers need to lower the cost of the electrification. As price and size are often connected, this is where the smaller, more flexible and more powerful approach proves beneficial.

Mechatronic Integration in Vehicles is Key

Today, engine compartments of hybrid-electric and battery-electric vehicles are usually designed as a solution with separate boxed traction inverters. These inverter modules are standard in many of the cars that currently dominate the market of electrified vehicles, from the Toyota Prius and the VW Jetta Hybrid to the Nissa Leaf. There are obvious advantages to this modular approach, as it is a simple plug-in solution, flexible in use and easy to install. But as the industry looks for improved power density and even tighter engine compartment packing, an integrated, space-saving solution is looking increasingly attractive.

At Danfoss Silicon Power, we have been working for some years on a way of merging inverter and electrical traction motor as a key enabler to improving the drives’ package density to reduce production costs. Our aim is to design an electrical machine, which includes all power electronics needed for a frequency inverter. Evidently an integrated solution as suggested here requires a more robust and mechanically proof semiconductor power module, which can withstand the vibration loading and significant temperature excursions that it is subjected to when placed inside the engine itself.

Our efforts resulted in the Direct Liquid Cooled Molded Power Module for Motor Integration, which matches all requirements regarding shape, robustness and cooling. It is designed as a molded half-bridge power module, in a compact package consisting of a copper base plate in combination with a direct liquid cooling system. 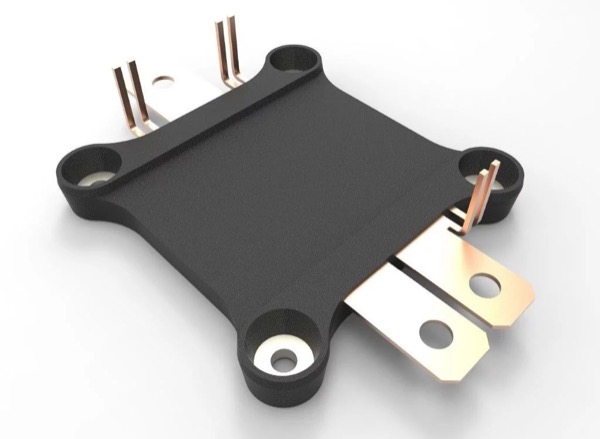 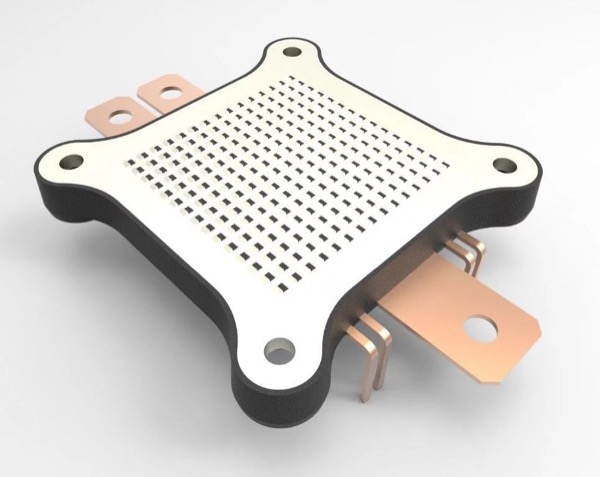 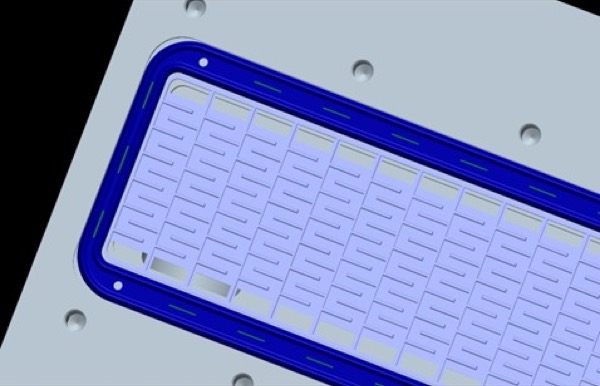 Building power electronics into the motor space means that its cooling system is inevitably tied to that of the engine and therefore needs to use the same cooling system for the power semiconductor modules as that used for the motor windings. Our integrated power module, therefore, has to be based on liquid cooling, where the coolant comes in direct contact with the module base plate.

Danfoss has been working with a principle for direct cooling for more than a decade, known as ShowerPower. For our motor integrated power module, we have applied an amended version of this technology. We have named it ShowerPower Plus, and it achieves 20% better cooling compared to the original ShowerPower. The thermal performance is improved by enlarging the surface area that comes into contact with the coolant. Figure 1b shows the enlarged surface structure, where the black dots are in fact pyramid shaped pin fins.

For the stack, we have applied Danfoss’ newly developed bonding and joining technology, which includes both sintered die attached and copper wire bonding. The firmly bonded stack tolerates demanding power cycling that is typical in automotive mission profiles and will not be subjected to harmful degradation from operating at elevated junction temperatures. The vertical stack of the power module is illustrated in the figure below.

Power and small-signal terminals on the module are created as a copper lead frame that is attached directly to the DBC substrate. The lead frame allows for a highly flexible design and a minimized inductive commutation loop, as it can be designed as a flat and wide conductor, using inductive counter coupling to reduce stray inductance. As a bonus, the terminal eliminates the need for terminal bond wires.

Increasing breakdown voltages limit the maximum current that can be drawn from an equally sized package. A feasible approach to high-power architectures is to use more than three-phases. This allows us to distribute currents on a plurality of smaller half-bridge modules.

A motor integrated multi-chip semiconductor power module has to meet specific geometric specifications to fit into the odd-shaped assembly space in typical rotary electrical machines. This makes it impossible to use the classic full-bridge six-pack inverter module with a central DC link capacitor and gate drive board. Instead, we designed a solution with a series of separate half-bridge modules with individual DC capacitors matched with each separate module. Distributed gate drive circuits complete the layout toward a multi-phase inverter, consisting of independent switching cells with identical commutation loops.

With this approach, we achieved a much higher degree of design flexibility. As the power modules share the cooling channel with that of the engine, they should be mounted in close proximity to the motor windings. The figure below shows three possible positions; either distributed circularly on the outer parts of the machine (a and b) or on the bearing shield plate of the motor (c). This way we also achieve shorter cooling channels, as the heat sources are placed close to each other. In order to avoid the need for additional AC bus bar or cables, we suggest that the module terminals are connected directly to the motor phases.

At Danfoss Silicon Power we are constantly developing our technologies to match the requirements of various industries. Motor integrated power modules can make a significant difference to OEM’s within the car industry in their efforts to reduce the CO2 emissions from their fleet. The direct cooled power module can help the industry make it more attractive for consumers to move over to hybrid models, as it can be used to upgrade engines on existing conventional car models.

Integrated power modules reduce overall system costs, as considerably less copper and silicon is used – an obvious benefit for an industry, which is still struggling to make it easier for consumers to make the decision to move over to an electrified vehicle.

The market wants smaller, more flexible and more powerful - but as a rule, making components smaller also makes them hotter. The Danfoss ShowerPower® Plus technology allows a smaller module to cope with higher temperatures, to deliver more power while using less of all the materials that cost.

Ole Mühlfeld worked as the Application Engineer - Automotive at Danfoss Silicon Power since January 2012. He was promoted and now works as the Director of Application Engineering. He is particularly skilled in the field of power electronics, renewables and automotives. He earned his Bachelor's Degree in Physics (Diplom-Physiker) at Christian-Albrecht University of Kiel located in Germany.

Rüdiger Bredtmann works as the Director of Customer Relations - Automotive at Danfoss Silicon Power GmbH. He is particularly skilled in the field of business strategy, manufacturing and change management. He earned his Doctorate in Electrical Engineering at the Technical University of Berlin and his MBA in Business Administration at WHU - Otto Beisheim School of Management.

Klause Olesen worked as the Thermal Design Specialist at Danfoss Power Electronics. He now works as the Senior Research Specialist responsible for the development of new cooling technologies for power electronical components and systems. He is particularly skilled in the field of simulations, research and development and in power electronics. He holds a Master's Degree in Physics which he earned at the Aarhus University.

Lars Paulsen works as an IT Technician at Danfoss Silicon Power where he is responsible for installing and configuring computer hardware operating systems and applications; monitoring and maintaining computer systems and networks; and testing and evaluating new technology.